“I’m excited about the opportunity to do some good marketing
with the Framing the American dream project.”

“The economy was in pretty rough shape,” Dave remembers, thinking back to the early 1980s. He’d been doing civil engineering work and he “just happened to land a job in this truss building thing.” He grew up on the east coast, in and near Delaware, but decided to move to Seattle simply because it “seemed like a good idea.”

That idea and his experience eventually turned into his current position at Louws Truss, a company that goes back to the early sixties and that’s currently in its third generation of family ownership. Dave (pictured with grandaughter Iris) still sees his career as a happy accident. “It’s just one of those things,” he says of entering the component manufacturing industry. “You kind of fall into it.”

What’s the best part about what you do?

“The people, the challenges. Mostly the people.” Dave says the satisfying part of doing the kind of work he does is that it’s always motivating. “The work is stimulating enough that it keeps your interest up and keeps you going.” He hasn’t moved on to another industry because “It hasn’t gotten boring yet. So I keep on doing it.” And it certainly doesn’t hurt, he adds, that he’s “worked with wonderful people over the years.”

Some of those people are Dave’s fellow members of the Northwest Truss Fabricators Association (NWTFA), the local SBCA chapter for component manufacturers in Washington state. Dave is NWTFA’s treasurer. The chapter, he says, is active in holding educational seminars on truss installation for local building officials. Their efforts have paid off in recent years by guiding market changes.

“The most exciting thing for us has been the acceptance of floor trusses in the market,” says Dave, particularly because the northwest is the home of TrusJoist. Over the years, Dave has poured a lot of time and effort into reviving the floor truss market, so renewed interest is particularly important to him as well as welcome news for other NWTFA members who, Dave says, have “done a great job for local designers and engineers in terms of their products.”

That positive development helps balance out the challenges of the industry. Most prominent lately, Dave says, has been the state’s increased scrutiny of construction use of mobile cranes. “Most areas of the country don’t deliver the crane trucks,” he explains, “there are only pockets” that do, and Washington just happens to be one of those places. In other areas of the country, the builder is responsible for unloading and lifting, which means Washington is one of the few places where component manufacturers often assume the additional cost and risk of providing a crane.

Despite the difficulty that comes with that situation, Dave is positive about his market. “We’re continuing to see job growth in the area and housing is pretty positive so we’re just looking forward to having a stable platform on which to run our business,” he says. “Just a nice, steady, business climate is what we’re looking forward to.”

What’s on the horizon for SBCA?

Dave’s passion is providing technical expertise, so with any technically-focused SBCA project or committee—those concerned with testing, technology or quality control, for example—Dave’s probably involved. But that’s not his top priority as he looks ahead. “Going forward,” he explains, “one of the things I’m particularly excited about and really looking forward to is the opportunity to do some good marketing with the Framing the American Dream project.”

Particularly important is taking a message about careers in the industry to a new generation. “I think the way that we approach the marketing is with the mediums that the younger generation is used to using. I can definitely see attracting people like that,” he says. For example, Dave sees the industry tapping into young people’s “video game mentality” by pushing 3D modeling software and other technology currently leading the industry in new directions.

To get new blood in the door, Dave says, component manufacturers need to reach out to a new generation, “and show them that we are very sophisticated in what we do and have great opportunities. It’s not just boards and hammers. 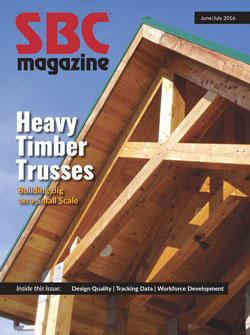 Execute Your Hearing Conservation Program
The Efficiency Edge
The Difficulty of Differing Deflection: Improving the Performance & Serviceability of Trusses
The Beauty of a Blank Canvas
Building Big on a Small Scale
Finding Balance
Leaping at the Chance