In order for a building to resist wind and seismic forces, the roof and floor framing must be adequately attached to the braced wall panels to provide a continuous load path for the lateral loads, as shown in Figure 1.

At exterior walls, these in-plane lateral loads are usually transferred from the braced wall panel through the floor to a braced wall panel or foundation below by the rim joist, end joist, band board, blocking or wall sheathing provided at the end of the floor framing system, as shown in Figure 2.

However, when shear walls are located in the interior of the structure, additional blocking and/or framing members may be needed to connect the braced wall panels to the roof or floor system. The International Residential Code (IRC) provides details for these connections in Figures R602.10.8(1) and R602.10.8(2), as shown in Figure 2.

The code-provided details apply to sawn lumber framing only and do not necessarily work for connecting metal plate connected wood trusses because of their open web configurations.

How should parallel chord roof/floor trusses be connected to an interior braced wall panel that does not have a truss located directly above the wall?

This method eliminates the need for installing additional blocking members to transfer the forces from the roof framing to the braced wall panel. However, long length studs not typically found on jobsites may be required, so there is a need to plan ahead if this method is used.

Figures R602.10.8(1) and R602.10.8(2) are shown in Figure 2. The full height blocking between joists shown in the IRC details cannot be attached to floor trusses because of their open web configurations. To address this issue, SBCA is developing standard details that can be used to connect interior braced wall panels to a floor truss system, as shown in Figure 4.  (See also attached pdf below.)

The details provided in Figure 4 are only for residential structures built in accordance with the IRC. The walls are to be non-load bearing and shall have a self-weight not greater than 120 plf. Floor trusses shall be spaced a maximum of 24" on center and shall be sheathed with a minimum of 23/32" OSB. The details are for braced wall panels only. If engineered shear walls with hold-down devices are used instead of braced wall panels, the uplift and compression forces at the ends of the wall must be considered in the design of the wall to truss connections.

It should be noted that the IRC provides an additional method of connecting perpendicular roof trusses to a braced wall panel in Item 3.2 of Section R602.10.8.2 and Figure R602.10.8.2(3). As illustrated in Figure 5, this method was developed for a gable/hip truss to exterior wall connection, but it could also be applied to an interior wall if the roof sheathing is attached to the 2x blocking. This method may be used in lieu of the details provided in Figure 4. However, the detail from the code is more difficult and time consuming to install than the details developed by SBCA.

After reviewing these details, component manufacturers may want to consider supplying blocking panel products made with leftover lumber pieces from the manufacturing process. It might also be possible to manufacture and inventory certain depths of blocking panels for use with common floor truss depths. This is an opportunity to reduce waste, add a product line, and provide customers with an efficient and cost-effective way to comply with building code requirements.

To pose a question for this column, email technicalqa@sbcmag.info. 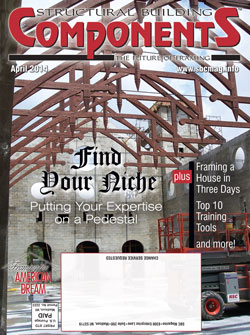 Find Your Niche: Putting Your Expertise on a Pedestal
Framing a House in Three Days: Optimization Is a Key Component
Top 10 Employee Training Tools