Beyond super-sized energy efficiency, there are many other benefits to net-zero homes.

Fifteen dollars doesn’t get you much these days. A few gallons a gas. A large pizza. A year’s worth of utility bills…

It seems staggering, but it’s true. The net-zero homes Habitat for Humanity Sacramento (CA) is building in its community will generate minimal monthly gas and water bills, but the credit the homeowners earn from their electricity bills should offset such costs. “Habitat builds homes for deserving families who have to put in 500 hours of ‘sweat equity’ into the home they receive,” said Dan Wilson, Habitat’s Director of Construction. “In return, we provide them with a 30-year, interest-free loan. The less they pay per month in utilities is more they can pay back on their mortgage.”

Beyond super-sized energy efficiency, Wilson points out there are several other benefits to net-zero homes like the one they are currently completing in Sacramento (See photo). These advantages turn into virtual talking points for component manufacturers to use in promoting the use of advanced framing techniques in green building and beyond. “Everyone thinks these [energy efficient] homes cost more,” Wilson said. “The reality is that we have limited resources, so cost is a huge factor. These homes don’t cost more, they just reallocate the cost. The engineering and inspection costs are higher, but the ‘sticks and bricks’ costs—the cost of materials and labor—is significantly less.”

To see how it all evens out, let’s look at the home design itself, and then get into the ‘sticks and bricks’ cost savings that can be easily captured by component manufacturers and their builder customers taking this approach. With the structural component industry’s engineering know-how, there are many opportunities for increased sales.

Engineering Outside the Box

“We’ve worked with Habitat to build 14 LEED-certified homes (8 gold, 6 platinum) over the past few years,” said Norm Scheel, the Engineer of Record for various Habitat  projects. “But this home goes way beyond those in terms of engineering and energy efficiency.” One key aspect was to place the HVAC mechanicals and duct work in conditioned space, essentially insulating it inside the building envelope (see Figure 1).

Figure 1. One key aspect of this home was to place the HVAC mechanicals and duct work in conditioned space, essentially insulating it inside the building envelope.

At first, Scheel looked at taking a traditional approach and using attic trusses to create a space to install the mechanicals. “But when we looked at the blocking that would have had to be done, I got concerned the HVAC professionals wouldn’t necessarily know what we were trying to accomplish,” explained Scheel. “Instead, we went with scissors trusses to hang the mechanicals off of, and then designed essentially a glorified drop ceiling to hang the drywall to.” (See photo.)

Scheel also raised the heel heights of the trusses (see Figure 2) to make more room for the mechanicals and duct work, and to allow for more insulation. “The raised heel is such a simple change, and it allows you to eliminate thermal gaps that traditionally occur at the outside connections,” said Scheel. “It also made it much easier to vent to the outside and even slightly reduces the pitch of the roof to make it easier to work on.”

The raised heel also allowed for a unique engineering approach. “We attached a 1-¼" LSL to the outside heel to evenly distribute the load over the entire top plate of the wall,” said Scheel. “This even load distribution allowed us to eliminate all the headers above the doors and windows (see Figures 2 and 3 and photos below).

Figure 2. The heel heights of the trusses were raised to make more room for the mechanicals and duct work, and to allow for more insulation.

Figure 3. LSL was attached to the outside heel to evenly distribute the load over the entire top plate of the wall. This engineering approach eliminated the need for headers above the doors and windows throughout the house.

Examples of the result of using LSL to evenly distribute the load over the top plate. Note the lack of headers above doors and windows.

Beyond the elimination of headers, they framed the wall panels using 2x6 studs to create more room for insulation and added taped foam sheathing as the air and moisture barrier to the outside of the walls. Scheel also eliminated several studs in the exterior walls where interior walls met up (see Figure 4).

Figure 4. Several studs in the exterior walls where interiors walls met up were also eliminated.

“This simple alteration has many benefits,” said Scheel. “First, you reduce the amount of wood, which saves money and lightens the weight of the wall during framing. Second, you can more easily place insulation in that cavity, which has a much higher R-value than wood, much like what we accomplished above the doors and windows. Third, it means that down the line it is much easier to move or eliminate interior walls during remodeling.” As a result, the walls in this home have a whopping R-value of 26.5!

“I thought of this project as ‘trusses gone wild,’” said Wilson. “I’ve been working in this industry for 29 years, and I have never put the HVAC mechanicals in conditioned space before.” At first, Wilson and others on the project were concerned the scissors truss and dropped ceiling arrangement would be costly, but it worked out to be about the same cost as a more traditional approach. “There were 16 trusses. A typical attic truss package would have cost around $3,200, but these scissors trusses were closer to $2,600,” said Wilson. “Of course, there was an extra layer of drywall for the dropped ceiling, so we broke even.”

“You certainly couldn’t have accomplished it at that cost using conventional framing techniques,” said Wilson. He pointed out that all the professional framers they employ have years of conventional framing experience, but they have all come to embrace componentized framing and see it as the superior construction method.

One of those framers is Terry Hardin. He was the lead framing supervisor for the net-zero home. Hardin has been a carpenter framer in the San Francisco Bay area for over 34 years. He got into framing right out of high school, and had always used conventional framing techniques before coming to Habitat. “At first, I was not a big fan of components,” said Hardin. “My initial impression was that it wouldn’t structurally work. I had to see it to believe it.”

Four short years later, Hardin can’t imagine why anyone would frame a house any other way. “It’s faster, cheaper and easier,” said Hardin. “It’s significantly lighter to work with, there is so much less waste on the jobsite, and in the end, you get a much better insulated envelope.”

On this particular job, Hardin was in for an additional surprise. “I had built this building’s floor plan five to six times before. I thought I knew exactly what we were doing,” explained Hardin. “They told me to take a closer look at this plan, and I was amazed at what they did with this house. Raising the heel heights, taking out the headers and eliminating the channels at the intersecting walls took a lot of weight out of the framing.”

The biggest challenge Hardin had to overcome on the project, besides working with a framing crew made up almost entirely of inexperienced volunteers, was figuring out how to attach the siding with all the extra foam sheathing and moisture barrier on the exterior walls. “We ended up with an 8-½" thick wall, by attaching extra furring around the windows and corners, we were able to work out a solution.” (See photo.)

Not every builder is going to have the same motivations as Habitat to build a net-zero house. However, changes in the energy code, combined with an increased public awareness of the green building movement, do appear to be driving an increasing number of builders toward considering green construction (see “The Blooming of Green Homes” from April 2012). Now appears to be an opportune time for component manufacturers to market themselves and their ability to do advanced framing to builders, within the context of green and energy efficient construction. For a component manufacturer’s perspective, see “Faces of the Industry.” 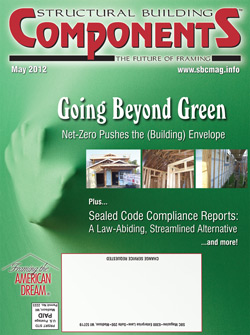 The Most Valuable Week of the Year - BCMC!
Wind Load Analysis: MWFRS vs. C&C
Parting Shots
Faces of the Industry