"If I have one hand in the oven, and my other hand is in the freezer, on average, I would think I’m doing alright!” This was a typical analogy used by Dr. Stanley K. Suddarth, Ph.D., P.E., in this case, to demonstrate the potential problems associated with using averages in calculations. When Stan Suddarth passed away on June 9, 2011, in Newburg, Oregon, he left behind a significant legacy in academia and the structural building components industry. In 1986, he was one of the first two inductees into the SBCA Hall of Fame in recognition of his considerable contributions to the industry.

He may be most well-known for his work developing the Purdue Plane Structures Analyzer (PPSA), but his work on the American Society for Testing and Materials (ASTM) D-7 Committee on Wood, the Truss Plate Institute’s Technical Advisory Committee (TPI TAC), and his work with USDA Forest Products Laboratory (FPL) all played pivotal roles in the way the truss industry developed and flourished during his lifetime. Before delving into the significance of his many achievements, it’s important to appreciate the passion and drive he had for his work, and how his unique personality facilitated the difficult cross over between theoretical engineering concepts and the manufacturing process.

A Source of Passion

“My father was impressed by mass production,” shared Dr. Steve Suddarth, Ph.D., Stan’s son and Director of the Configurable Space Microsystems Innovations & Applications Center (COSMIAC) in New Mexico. “He was intrigued at how a small savings in one thing could be multiplied over a large scale to yield a big return.” That interest is probably what ultimately led him to focus on structural components, but his life journey is what prepared him for his success.

Stan Suddarth was born and raised in a blue-collar home in Westerly, Rhode Island, by his single mother (see photo of Stan as a young boy) . His grandfather was a tool and die maker and a skilled machinist, and young Stan started as his apprentice. During his junior year of high school, however, his grandfather gave him $20 (in 1938, that was a sizable gift) and told him to go to college. “At the time, he had no plans to go to college, but he took his grandfather’s message to endeavor for something more,” said Steve Suddarth. “His love of working on cars probably influenced his decision to pursue the field of engineering.” Ultimately, Stan chose Purdue University, which would become his entire world for the better part of four decades.

He was initially drawn to Purdue’s School of Agriculture, perhaps influenced by the fact that many forestry majors got jobs working out in the field. “My father always loved to camp, and during college he got a job over the summers working as a lookout on Granite Mountain in Washington,” remembered Steve Suddarth. “As kids, we would go back there often to marvel at the long trek [eight miles rising over 3,800 feet] he had to make from the base up to the tower every day.”

After graduation, Stan joined the Marines and fought in the Pacific during World War II. He was assigned to an anti-aircraft radar division. He came from a long line of men who had served during war time, including his great-great grandfather who had earned the Congressional Medal of Honor for his valor in the Siege of Petersburg during the Civil War.

“He worked with some of the most advanced technology of the time, and he excelled in it, rising to the rank of Captain,” explained Steve Suddarth. “That success likely served as a foundation for the confidence he had when he returned home to pursue his advanced degrees.”

In the early 1960s, there was a desire to construct homes faster and more efficiently. The invention of the metal connector plate in the 1950s and the formation of TPI in 1960 paved the way for a new method of construction that could do just that. However, as this fledgling industry attempted to displace the established practice of building a home one piece of lumber at a time by a skilled carpenter, there were a number of technical issues facing these early pioneers. Stan came into the field at just the right time. His body of work addressed both the mechanical properties of lumber, but also the benefits derived from the use of the metal connector plates at the component joints.

“Stan had a marked influence on critical elements of structural wood design standards,” shared Bill Galligan, who worked on collaborative prgrams with Stan while at FPL and on joint research efforts for over 20 years. Stan was a key figure on the (ASTM) D-7 Committee on Wood, which early in his involvement developed a new approach to standards development regarding the mechanical properties of wood. “There were so many evolving products in the 70s; composite lumber, I-joists,” remembered Don Sharp, a friend and former head of International Engineering for Trus Joist Corporation. “The standards we developed had to become more detailed and prescriptive due to the increasing complexity of the products and the need for sound and reasonable design values.”

“My father was always fascinated with the proposition that you could take a naturally occurring organic substance and assign general structural properties to a larger set based on a smaller sample,” said Steve Suddarth. One had to look no further than Stan’s considerable personal library focused on the history of how wood had been used in structures. “He had this interest in the use of wood in structures and where long-time existing standards had evolved from,” remembers Sharp.

“Not only was he a consistent participant in ASTM D-7, but he also contributed to the National Design Specification,” added Galligan. “One unique approach Suddarth took was developing an adjustment to column design for the variability in stiffness of the column material to account for buckling.” Stan’s research program at Purdue University also examined other aspects of truss design and performance, including relating basic wood properties, lumber design values and truss construction details to plate performance.

In the late 1970s and early ‘80s, Stan consulted with FPL, which was looking for a roadmap to help align the Laboratory’s wood engineering program with national needs in the light frame housing market. “Stan’s extensive and time-consuming effort resulted in an FPL publication that provided guidance for research goals and planning for over a decade,” pointed out Galligan.

Stan’s ability to successfully attack problems in wood structural design is probably best illustrated through his development of the PPSA. “PPSA solved the vexing problem of how to incorporate plate performance in the analysis of truss design,” explained Galligan. “Prior to PPSA, performance was captured only by a variety of estimating techniques.” In refining PPSA, Stan applied his unique combination of engineering mechanics, knowledge of wood properties and common sense to a solution that was a major step forward for the industry and standardized a method that could be widely accepted and applied.

At a time when people had desk calculators, and computers the size of large rooms accomplished computations using paper punch cards, the PPSA software program was a leading edge tool of the day. “His PPSA program was at one time or another used for truss analysis by most of the connector plate companies,” added Steve Cabler, Senior Vice President for Engineering and Technology for MiTek Industries. “It gave us the flexibility to design more complex configurations and indeterminate components.” In many ways, it was the precursor to all the truss design software currently used by the industry to design the complex truss configurations builders and architects rely upon to build today’s structures.

As the number of truss fabricators grew, the need for standards and guidance for manufacturers increased. During this time, the work of TPI TAC grew in importance, and Stan’s participation was a key element. “Stan’s research and guidance had a tremendous influence on our industry through his participation in TPI TAC,” said Cabler. “When he spoke, people listened. Just having him as a participant gave TPI a high degree of credibility.”

“He was also a voice of reason,” added Dave Brakeman, Vice President of Engineering at ITW Building Components Group. “At the end of the day, if there was a conflict over a technical aspect of the standard, Stan would generally have the last say.” Beyond his expertise, there was a simple reason why he was listened to, and heeded, so often. He was a great communicator.

“Stan had a unique combination of analytical skills, an understanding of their practical application and the ability to communicate well,” remembers Galligan. “He was very good at putting things in real, essential terms.” Dr. Suddarth was first, and foremost, a college professor, and he enjoyed teaching anyone who was willing to learn. “When I joined TPI TAC in the early 80s, Stan was revered and respected,” shared Brakeman. “As a young engineer in the field, I was very appreciative of how approachable and patient Stan was, given his reputation.”

His most famous talks usually occurred outside the classroom. “Stan would go on the road with his good friend and colleague Don Percival from the University of Illinois,” said Galligan. “Those dog and pony shows discussed wood properties, truss design, truss handling and common sense wood engineering to the audience with a constant flow of jokes and some slap-stick.”

An Engineer on Engineered Wood

Metal plate connected wood trusses were not the only product that benefited greatly from Suddarth’s contributions. In the 1970s and early ‘80s, FPL was the only place one could go to get computer design assistance for glue laminated beams. “This stifled innovation in beam construction, limiting options to a few lumber combinations because of either the tedious hand calculation or having to borrow access to the computer at FPL,” explained Galligan.

As desktop computers became more prevalent, he worked with a handful of graduate students to design a software program that could meet design standards, yet be programmed to introduce variable lumber design values into a composite finished product. Galligan added, “Stan then designed a more flexible glulam design program that the American Institute for Timber Construction turned into the first computerized design program for the entire U.S. glulam industry.”

Through independent contracting before and after his retirement, Suddarth also worked on the development of products like Weyerhaeuser’s parallam beams and other engineered wood products.

It’s hard to say where the structural components industry would be today without the influence of Dr. Stanley Suddarth. Certainly, the beginnings of this industry was borne on the backs of many hard-working visionaries, but the technical demands of these products perhaps required someone of Suddarth’s intellectual prowess and practical know-how to ultimately help it flourish.

“Initially, you were limited to a few common truss types with recognizable web patterns,” said Brakeman. Each truss had to be sketched out and designed by hand, which was time consuming. “Through PPSA and his assistance developing the TPI simplified method and Q-factors, it suddenly became much easier for people to write computer design programs to design trusses.”

While Stan will be greatly missed by many in and out of the industry, it is impossible to miss his significant influence, whether you look at fundamental assumptions about the mechanics of wood, industry standards, or truss design software. “To my father, it was all about practicality,” shared Steve Suddarth. “Everyone had to have a home, it had to hold up and it had to be affordable. It made sense to him. That was why he was so serious about his work.”

Many thanks to everyone who contributed thoughts, stories and photos to this remembrance of an industry legend. Enjoy additional stories about the life and times of Stan Suddarth. 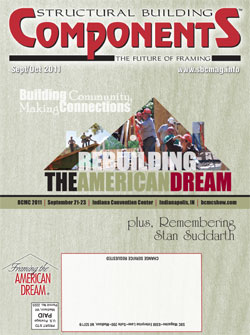 Remembering Stan Suddarth: A Peerless Industry Standard
Are You Ready to Ramp It Up?
BCMC 2011 Show Guide & Exhibitor Preview
More Stories about Stan Suddarth
Mr. Truss Gets on Top of Fall Protection at SBCA's Annual Meeting