Perfect storm (n.) an expression that describes an event where a rare combination of circumstances will aggravate a situation drastically.

Remember back, if you can, to the last time this country’s housing market’s sluggishness resembled what we’re experiencing today. From 1988-1992, the U.S. experienced an economic recession. It wasn’t nearly as profound or prolonged as our current situation, but nonetheless many of you probably remember (or have been told) how bad the housing market was. Housing starts experienced a 45 percent drop over that timespan. When housing recovered swiftly from 1992 through 1994, lumber prices skyrocketed.

In large part, the imbalance between available supply and the sudden large demand was due to curtailed production during the recession. It took time for many of the mothballed mills to be brought back online. However, there was another factor at play: the spotted owl. In 1990, the U.S. Fish and Wildlife Service placed the Northern Spotted Owl under the protection of the Endangered Species Act, and in 1992 put 6.9 million acres of prime softwood forestlands in the Pacific Northwest on the do-not-cut list, just as the demand for that lumber was being realized.

Most lumber analysts currently predict a similar “perfect storm” imbalance between the global supply of softwood lumber and demand to strike sometime between 2013-2015. To boil down why they predict this, and to understand how tenuous this prediction is, we have to look at three key factors: recent changes in the forestry landscape in North America, rising demand of China and other offshore markets, and U.S. housing starts.

Changes in the Playing Field

The timber harvesting and processing industry in North America has changed dramatically over the past decade, which plays a significant role in setting the stage for the next lumber shortage crisis. In the past, most timberlands were owned by integrated forest products companies (think Weyerhaeuser), which not only owned and grew timberlands, they harvested those lands to feed their own mills, and sometimes even owned manufacturing and building material distribution facilities to drive demand for their product.

Over time, those integrated companies have sold their North American land holdings to a number of new timberland companies, especially timberland investment management organizations (TIMOs). Dennis Neilson, Director of the international forest industry advisory and publishing firm, DANA Limited, says, “These new timberland owners are chasing log exports to China and other Asian countries and, in many cases, ignoring the needs of domestic mills and their ability to pay on the spot market.”

In other words, without the need to feed their own production infrastructure, these TIMOs are free to export as much product as they want, if the price is right. Neilson added, “China’s mills are able to pay much more for logs currently than U.S. mills due to a number of factors. They are more flexible in the species, grades and sizes of lumber they output, and they are offering just-in-time deliveries with high prices in China.”

Drop Off in Supply

According to international lumber forecaster Wood Markets’ annual report Billion Board Foot Club, for the past three years only 11 companies reported producing over 1 billion board feet (bbf) of lumber. By way of comparison, at the height in 2006, twice as many (22) companies exceeded that amount of production. Of those 11 companies, five are based in Canada; four are in the U.S., one in Europe, and one in South America. There are signs of life, however. Together, they accounted for 23.3 bbf in 2010, a net increase of 2.5 bbf over 2009. Those 11 companies recorded an average increase of 12 percent over the past year.

Taking a closer look, Canadian companies increased production at a faster rate than U.S. companies in 2010. The biggest reason for this was that companies in British Columbia took the government’s lead in opening strong trade into the booming Chinese lumber market. As proof, four of the five Canadian companies that exceeded 1 bbf of production are headquartered in B.C., and they nearly doubled their export volumes to China in 2010.

The sudden and precipitous drop off of U.S. residential housing starts (see Chart 1), combined with the lagging recovery, threatened to devastate the Canadian softwood forestry industry. According to a report published by the Wood Products Council,1 in 2006 about 39 percent of all solid wood products consumed in the United States and 28 percent of all solid wood products consumed in Canada were used for new residential construction. It was not surprising, then, to read of a Canadian sawmill shutting its doors every couple of weeks in 2008 and 2009. That’s when Canadian producers began a desperate search for markets outside of North America.

The mountain pine beetle infestation in Canada adds an additional wrinkle to the issue of softwood lumber supply going forward. The devastation caused by the beetle in the short term has meant dramatically increased harvest rates in affected areas. According to the Ministry of Forestry in British Columbia, approximately 382 bbf of timber will end up being destroyed by the pine beetle (see Map 1).

Most timberland in Canada is owned by the government, and they have approved stumpage rates that exceed sustainable levels (i.e., they are cutting down trees faster than they can be replaced through growth patterns) in an attempt to curtail the spread and harvest usable timber. That has meant there is a large supply of logs available to mills, regardless of the existing demand, and to make matters worse, it’s damaged goods. Fortunately, China appears willing to use most of the damaged fiber as form material for pour concrete projects.

The bigger problem with the beetle kill is yet to be felt, however. Gerry Van Leeuen, Vice President of Wood Markets, explained, “By 2015-2016, all of the unharvested trees killed by the pine beetle will be unusable. B.C. alone will lose approximately 40 percent of its interior timber supply for lumber production.” In the end, they will only be able to harvest approximately 40 percent of the timber killed by the beetle. Van Leeuen added, “that decrease in supply will mirror the effect the spotted owl caused to timber supply in the U.S. Pacific Northwest in 1992.”

Given Canada’s predicament of overharvesting to combat the beetle infestation while North American demand is at an all-time low, coupled with the fact that a portion of that lumber is unusable for many traditional uses, the meteoric rise in China’s demand for wood fiber could not have come at a better time. It’s also been quite a boon for U.S. timber producers, as you can see in Chart 2.

“These massive import rates are likely sustainable,” said Van Leeuen. “Official China government five-year-plan forecasts call for log and finished wood products consumption to increase at a rate of 8-10 percent per year.” Many sources are quick to point out that this will likely mean the gap between China’s domestic lumber supply and its need will continue to widen, resulting in 12-15 percent annual increases in their need for offshore supply (see Chart 3).

So, the million dollar question is when will U.S. residential housing starts return, and what will they return to? While it’s difficult to be overly optimistic at the moment, let’s assume the National Association of Homebuilders, Wood Markets and a host of other analysts are correct, and housing starts return to an average of 1.3-1.5 million housing starts by 2013.

If China’s economic growth continues on its steady track, and the government remains committed to fulfilling its pledge to build 35 million low-income homes over the next five years, in addition to the 25-35 million regular private residences,2 and other global markets show moderate increases in their construction rates as well, demand for softwood lumber will likely outstrip available supply very quickly.

As mentioned previously, supply will be severely constrained in British Columbia due to losses of salvageable timber from the beetle kill, and most of Canada will likely see a decrease in lumber production as provincial governments look to reduce stumpage and return harvest levels to 100-year sustainable levels.

“If all of these events occur, you may see the price of lumber double from today’s levels,” predicts Van Leeuen. “That will then prompt many of the TIMOs and private landowners in the U.S. and Europe to harvest and bring their timber to market.” Eventually, supply will catch up with demand again, and prices will level out.

As you can see, a lot of conditions need to occur in order for lumber’s perfect storm to take place. But if they do, that initial price ramp up period in late 2012 through 2013 will be a challenging time to purchase lumber, and will have another big impact on profit margins.

SBC Magazine will continue to monitor this situation and report on it weekly in SBC Industry News, while providing more global information in SBC Magazine. If you have any questions regarding lumber supply issues, please contact us and we will address them in one of these two information resources. 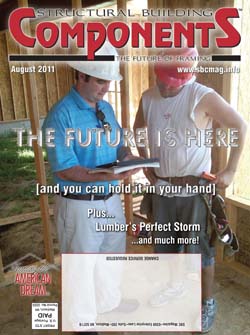 The Future Is Here
BCMC Build: Keeping Members on Their Toes
Lumber's Perfect Storm: If It Comes, It Won't Be Until 2013