SBCRI’s testing and resulting analysis is helping to facilitate a level playing field.

Recently, at the Structural Building Component Research Institute (SBCRI), we have been focusing on clearly defining braced wall panel design values.  Why? Because we have found that there’s significant confusion in the marketplace, and in the building codes themselves, regarding lateral resistance nominal unit shear capacity (NUSC) values.

Without a full understanding of the true resistance being used in the design process, it is extremely challenging (at best, and impossible, at worst) to undertake new product development that is competitive with existing applications. Our testing and resulting analysis is helping to facilitate a level playing field, allowing for fair and understandable braced wall panel and braced wall line product development.

In August, SBCRI sent our analysis of current and existing braced wall panel data (which has been confirmed by our test findings), along with our recommendations and conclusions, to the American Wood Council (AWC) (Developer of SDPWS, WCFM and NDS), the International Code Council (ICC) and the International Code Council-Evaluation Services (ICC-ES). This work defined what we believe to be a detailed and accurate assessment of what the building codes dictate. SBCRI’s correspondence with these organizations, as well as all the supporting background data can be found online.

SBCRI has subsequently been involved in an ongoing exchange with AWC to provide greater clarification of braced wall panel resistance as defined by the building code and AWC’s design documents. AWC has provided valuable insight into various code provisions, and their assistance has been greatly appreciated. This article will delineate the key concepts of our findings and our current understanding of the resulting data.

Provide the nominal unit shear capacity (NUSC) for an isolated 4x8 sheet of 3/8" OSB attached using 8d (.131) nails at 6:12. This is a braced wall panel (BWP) in residential conventional construction with studs spaced 16" o.c., interior gypsum wallboard and attached to the foundation with anchor bolts.

Here is the answer:

1. The NUSC value in a wind zone can be one of the following:

2. The NUSC value in a low seismic zone1 can be one of the following:

There are effectively 3 different NUSC values each for wind  and seismic calculations depending on the code/standard used. However, resistance = resistance. Common sense says that WSP performance should be unaffected by the code or standard used to define the approach to resisting the applied loads.

The values listed in this design problem are based on the braced wall panel (BWP) nominal unit shear capacity (NUSC) values defined in either the building code, AWC’s Wood Frame Construction Manual (WFCM), or AWC’s Special Design Provisions for Wind and Seismic (SDPWS).

Through correspondence with SBCRI, AWC clarified the BWP (shear wall) NUSC values contained in Tables 1-6 (below) apply to applications with the following boundary conditions (the following is an excerpt taken from a letter dated September 20, 2011, and posted on our website):

Based on this feedback from AWC, the key concepts regarding NUSC values include:

1. As shown in tables 1 through 6, the “design values” provided by the building code, WFCM and SDPWS are essentially the same when compared on a common denominator basis (i.e., using NUSC values).

2. These values are all based on small scale ASTM standards (i.e., E72/E564/E2126) that use full overturning restraint per AWC’s feedback.

3. ASTM Standard testing usually has a maximum length of 8 to 10 feet (Figure 1 below is provided as an example of a typical ASTM test) although some ASTM E72/E564/E2126 testing extends the length to 20 to 30 feet.

4. Full overturning restraint in the real world means the use of tie-downs or hold-downs at the end of each 8 to 10 foot length of braced wall panel.

a. This full restraint is necessary to achieve the design values provided in Tables 1-6.

b. AWC stated in the September 20 letter: “As we have discussed in the Wind & Seismic Task Committee and workshops many times, the reduced overturning restraint has a direct impact on the shear wall nominal shear capacity.”

5. We have provided a proposal to reconcile the differences between use of full overturning restraint NUSC values (e.g use of hold-downs or other methods to fully resist overturning) and designs using anchor bolts (partial restraint) as defined prescriptively in the IBC’s Conventional Light-Frame Construction (section 2308) and the IRC (section R602.10) based on our 12x30 foot building and single element testing (it’s available online).

Table 3: IRC Nominal Unit Shear Capacity Values for the Primary WSP Products Used in the Market – Based on the Consensus of the ICC AHC-WB. Obtained from the spreadsheet that was used to develop the IRC TABLE R602.10.1.2(1) BRACING REQUIREMENTS BASED ON WIND SPEED (as a function of braced wall line spacing)

Table 4: IRC Nominal Unit Shear Capacity Values for the Primary WSP Products Used in the Market – Based on the Consensus of the ICC AHC-WB Obtained from the spreadsheet that was used to develop the IRC TABLE R602.10.1.2(1) BRACING REQUIREMENTS BASED ON WIND SPEED (as a function of braced wall line spacing)

Table 5: IBC Nominal Unit Shear Capacity Values for the Primary WSP Products Used in the Market – For Use with IBC Section 2308.2, 2308.3 and 2308.9 Conventional Construction Provisions

As of July 2011, SBCRI has undertaken 376 12x30 foot building tests, 68 standard single-element ASTM E72/E564/E2126 tests, and 16 CUREE-based 12x30 building seismic tests. Examples of  these tests can be seen in the PowerPoint presentations provided at these two websites: sbcri.info/bwpppts.php and sbcri.info/ibcirc.php. From these tests, we have collected a significant amount of data showing the true NUSC values for various shear wall methods.

At SBCRI, we have discovered that in the realm of full building testing, “real world” building performance fits what common sense suggests would be the outcome for wall performance using anchor bolt-only applications (i.e., partial overturning restraint or no hold-downs), as allowed in the IRC, WFCM and IBC conventional framing provisions. Its actual performance can be seen in Photos 1 and 2 below.

We have detailed, as clearly as we can, the implications of our test results, as well as recommendations that can be implemented to provide accurate braced wall panel NUSC values for conventional construction applications. For now, the ICC and AWC have published, and through subsequent code adoption provide as law, the values in Tables 1-6 as NUSC values. The values in these tables can be applied in accordance with the installation requirements of the building code, and/or the code referenced WFCM and SDPWS.

The goal of SBCRI’s work has been to provide a technically reasonable and equitable foundation upon which to make engineering judgments when using generally accepted engineering methods and accurate NUSC values. Knowing the specifics behind the creation of these NUSC values, and the specific boundary conditions used in their development, will allow all end users to make far better judgments with respect to their use in real world applications and their safety. Only then can true creative innovation take place within the light-frame construction industry.

Given the confusion that does exist in the market with respect to braced wall design, it is probably wise to list the definitions that the building code and code references provide:

1. Shear Wall A vertical structural unit composed of one or more shearwall segments in one plane.

2. Shear Wall Line Shearwalls which are not offset by more than 4 feet horizontally from any other shearwall may be considered in the same shearwall line.

3. Shear Wall Segment The vertical section of a shear wall without openings that forms a structural unit composed of sheathing, framing members, and perimeter members which act as a deep, thin vertical cantilever beam designed to resist lateral forces parallel to the plane of the wall, and which meets the aspect ratio limits of Table 3.17D.

1. Shear Wall  A wall designed to resist lateral forces parallel to the plane of a wall.

2. Shear wall, Blocked A shear wall in which all adjacent panel edges are fastened to either common framing members or common blocking.

4. Shear Wall Line A series of shear walls in a line at a given story level. The WFCM assumes that shear walls not offset by more than 4 feet horizontally from any other shear wall are considered in the same shear wall line.

2. Shear Wall A wall designed to resist lateral forces parallel to the plane of a wall.

3. Shear wall, Blocked A shear wall in which all adjacent panel edges are fastened to either common framing members or common blocking.

5. Shear Wall Line A series of shear walls in a line at a given story level.

a. [The WFCM assumes that shear walls not offset by more than 4 feet horizontally from any other shear wall are considered in the same shear wall line.]

1. BRACED WALL LINE. A straight line through the building plan that represents the location of the lateral resistance provided by the wall bracing.

2. BRACED WALL LINE, CONTINUOUSLY SHEATHED. A braced wall line with structural sheathing applied to all sheathable surfaces including the areas above and below openings.

3. BRACED WALL PANEL. A full-height section of wall constructed to resist in-plane shear loads through interaction of framing members, sheathing material and anchors. The panel’s length meets the requirements of its particular bracing method, and contributes toward the total amount of bracing required along its braced wall line in accordance with Section R602.10.1.

4. SHEAR WALL. A general term for walls that are designed and constructed to resist racking from seismic and wind by use of masonry, concrete, cold-formed steel or wood framing in accordance with Chapter 6 of this code and the associated limitations in Section R301.2 of this code.

4. SHEARWALL. A wall designed to resist lateral forces parallel to the plane of a wall.

a. Shear wall, perforated. A wood structural panel sheathed wall with openings, that has not been specifically designed and detailed for force transfer around openings.

b. Shear wall segment, perforated. A section of shear wall with full-height sheathing that meets the height-to-width ratio limits of Section 4.3.4 of AF&PA SDPWS.

5. TIE-DOWN (HOLD-DOWN). A device used to resist uplift of the chords of shear walls.

6. WOOD SHEAR PANEL. A wood floor, roof or wall component sheathed to act as a shear wall or diaphragm. 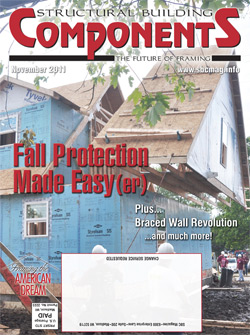 Together We Can Turn the Tide
Bearing Area
Parting Shots