Hold Hands Instead of Bandage Thumbs

Hold Hands Instead of Bandage Thumbs

When it comes to training new production employees, Carl Allison warns: “Don’t take anything for granted.”

As component division manager for 84 Lumber, Carl knows that basing the success of a new hire on a trust in common sense and the hope that others will look out for the newbie doesn’t work well. “Don’t just rely on the ‘you’re a smart guy’ approach,” he says. “Thorough training is incredibly important, and focusing on safety awareness is key.” Recent articles have looked at how a better understanding of human needs can improve employee retention, and a large piece of that puzzle can be addressed by establishing a systematic approach to training for the newly hired.

“Take a look at a new guy that’s building trusses that had a poor training program,” says Carl. “He’s swinging a hammer ten times to put on one plate. By the third day he’s worn out and his hands are beat up.” But it doesn’t need to be this way, says Carl. “Best practices are key. We teach them to hit the plate only twice.”

He explains that they use their senior employees to mentor the new hires. “In the first two weeks, we hold their hands. They’re not expected to do anything real or build anything. There’s no pressure to get up on the table and build product. We want them to feel like they’re there just to learn.”

Carl admits that “for a while, we were so desperate to hire people, we didn’t take the time.” He talked to one guy about why he quit after 13 days. The conversation shed a lot of light on the situation. “He told me that the supervisor hired him and then he never saw him again; he never even met the GM,” says Carl. “The guy couldn’t figure out open enrollment for his benefits. He hit his thumb five times a day and decided he just couldn’t do the job.”

Carl recognizes that everyone theoretically knows the importance of teaching safety and best practices, but he’s learned that it needs to be about more than these basics to ensure everyone’s thumbs stay healthy and they feel part of the team early on. It’s about “teaching them the company’s culture and leadership chain of command,” says Carl. “Make sure your new employees know: Who do I go to when I have questions? What are HR best practices? How do my benefits work?”

Onboarding needs to be about “more than just how to swing the hammer and build the truss,” Carl adds. In addition to giving them the tools they need to be safe and productive, he says, “we are telling them the next step so they know how to get promoted.” In Carl’s experience, “when you do it the right way and spend the time to train them properly, they feel like they are part of something,” he says. And that can make all the difference when it comes to retaining employees.

About the Author: Mindy Caldwell explores how component manufacturers find success growing market share and building their employment base.
Looking for an easy way to get new production employees started on the right foot?
SBCA’s In-Plant Basic Training is a straightforward program that provides a solid understanding of component manufacturing basics. Check it out at wtcatko.com/basic. 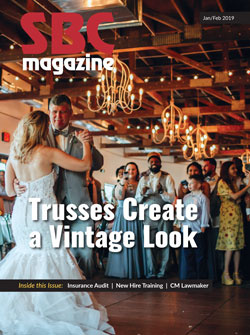