You Make This Industry Great

You Make This Industry Great

You have a lot more to offer the component manufacturing industry than you think. Beyond the skills and experience that allow you to do your job well, you have knowledge and a unique perspective from which other component manufacturers (CMs) could benefit. The pages of this issue are filled with tips, tricks and lessons learned, shared by speakers and attendees alike during the education sessions at BCMC this past October in Knoxville. All of the valuable information on these pages comes from CMs just like you: people who have learned something that works well and are willing to walk through it with others.

One of those people is Kelly LaBlance, technical manager for Builders FirstSource in Plant City, Florida. She’s been in the industry for 15 years, but this was the first time she took part in giving an educational session at BCMC. “I think I was gently nudged into doing it,” said LaBlance. “Design QC and incident tracking is a very important issue for me, so it wasn’t hard to agree to discuss what we do and why we do it.”

She knew she had good information to share and plenty of experiences to back up her team’s approach to design QC, but that didn’t mean she wasn’t hesitant. “Like most people, I was anxious about public speaking,” admitted LaBlance. “Yet, I knew I would benefit from the experience and hopefully others would benefit from hearing our story.”

LaBlance got over her fear of speaking in front of the group relatively quickly; relating her personal experiences helped immensely. “When I focused on what works for us, I found I was able to relax and be more candid. It wasn’t much different than having a one-on-one conversation,” said LaBlance.

She also had the help of fellow presenter Dan Morris, field service engineer for Apex Technology. “Going into it I was a little worried about giving a presentation alongside someone I didn’t know very well,” she said. “But it went really well and it gave me a chance to understand and benefit from how Dan and his company do things.”

If that wasn’t enough, the question and answer period after the formal presentation confirmed for LaBlance she had made the right decision. “Based on the questions that were asked, it was obvious the attendees got something valuable out of the ideas we shared,” said LaBlance. “Afterwards, it was also nice to hear how much they appreciated it.”

Having done it once, would she do it again? “Absolutely.”

The BCMC Committee is already considering topics and speakers for the education sessions at the next show. If you have an idea you think should be covered or, better yet, if you would be willing to share how and why you do what you do, let us know!

As LaBlance makes clear, presenting isn’t as hard as you might think. As the rest of this issue makes clear, both presenters and active audience participants in BCMC educational sessions are a vital part of making the show valuable to everyone who attends. Mark your calendars now for October 24, 2017—we’ll see you (and hear from you!) in Omaha. 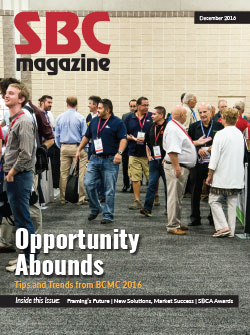