Making a Good Thing Even Better

Making a Good Thing Even Better

"Work safely. Go home Safely."
An expanded version of NFC’s FrameSAFE
Safety Manual template was rolled out  this spring
and is taking hold in the marketplace.

The updated version of FrameSAFE builds on the initial success of the manual, which was released in October 2014 and updated in May 2015 to include the Site-Specific Fall Protection Plan.

Kenny Shifflett, owner of Ace Carpentry, Inc. in Manassas, Virginia and chair of the National Framing Council’s (NFC) Safety Committee, says the latest release is an upgrade that makes FrameSAFE what it needs to be. If it weren’t for user comments, however, the new edition wouldn’t be what it is.

“The reasoning behind updating FrameSAFE from its initial release was really feedback from the field,” Shifflett said. “It was implemented by a number of large framing contractors and, after using it with their subs for a while, they wanted to see some additional items put in it.”

What Shifflett and the rest of the NFC Safety Committee encountered was a difference between the perspective of professional framers—the large framing companies that work directly with general contractors and builders—and that of and the skilled subcontractors—those who do framing work under contract with the framing companies. While FrameSAFE is intended to be a training and support system to help everyone with respect to safety concepts and implementation, subcontractors are affected the most, which is why the feedback from subs was so important.

The manual now  includes four new modules: Proper Use of Extension Cords, Avoiding Electric Shock, Horizontal Lifelines and Rescue Planning. Based on findings in the field and discussions taking place with OSHA, all are big-ticket topics. Horizontal Lifelines is an especially important inclusion because it covers a new method of providing fall protection on jobsites.

Paul Cracknell of Safety Pole, Inc. says rescue planning was an important topic to address because safely rescuing a fellow worker depends on a well-laid out plan developed in advance of any emergency. “Planning is essential in carrying out a successful rescue. Many times in the case of an emergency, confusion is a major factor and having a plan of action preserves order to make the rescue successful,” Cracknell said.

However, preventing a rescue scenario is Cracknell’s main focus, which is why he has concentrated on including the horizontal lifeline as a fall protection option in FrameSAFE since he started contributing to the NFC Safety Committee. The fact that it is also in line with OSHA 1926 Subpart M makes it that much more appealing for framers.

“It was important that the ability to use a horizontal lifeline be included in FrameSAFE because it represents a method of fall protection that some people may not know about,” Cracknell said. “Framers should have access to all the newest technology that can help them in the field.”

Shifflett is happy with these additions and says the NFC’s task of standardizing framing and safety across the industry is on the right path. National organizations, like OSHA and NAHB, and state safety programs, such as Maryland OSHA and Wisconsin OSHA, are recognizing FrameSAFE as a practical safety program and acknowledging the hard work NFC has put into creating it.

“From the beginning we wanted to standardize the approach to safety, and we wanted framers to get involved—it’s finally catching on,” Shifflett said. “We encourage all our framing members to spread the word and to give us feedback so we can make FrameSAFE even better.” 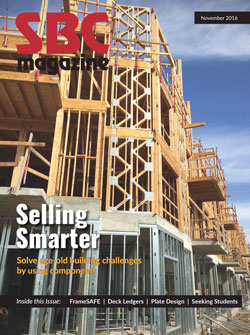 Truss Building 101: (No Pre-Reqs)
Where to Go When You're All Decked Out
Preemptive Design
Selling Smarter

Making a Good Thing Even Better
Parting Shots
Faces of the Industry: Greg Dahlstrom
Know Your Labor Market
By CMs, for CMs