Meet two new members of the SBCA Board of Directors.

How did you end up in component manufacturing?

GREEN: “I got into this business as a summertime job back in 1973. My first job was sweeping floors, and I just didn’t have the sense to get out.” Dave went from floor sweeping to production, then from production management into design and then sales.

STROM: “I was an equipment operator.” When he moved to Portland, Oregon, Steve had two job offers: one across the state and one a 15-minute commute away at a truss company. “That was ’88—however long ago ’88 was. After driving for about eight years, I started designing trusses.” Steve went from design manager to sales manager and then to general manager. “I had no plans at all to stay in the industry. But I really like it, obviously.”

What’s your chapter up to?

GREEN: “Like many chapters, we’re currently trying to come up with some ideas for fundraisers on the BCMC Build.” Also, Dave says, this year his chapter is trying something new: SBCA of the Carolinas is inviting associate members, such as suppliers, to present at each meeting, aiming for “more personal meetings that are attended by live, warm bodies and [that are] worth coming to.”

STROM: Steve says the Western Component Manufac-turers Association has been keeping members up to date with local ordinances by offering educational sessions. One topic was Oregon’s wide-load and other driving laws that affect deliveries. “Another one was crane safety. We use a lot of boom trucks, and the laws are changing in 2017.”

You’re active in your local market; why get involved in SBCA at the national level?

GREEN: “The more localized we can make our groups the better,” Dave says, but those groups “need the national SBCA because I think there’s a lot more going on nationally than any one chapter could move the needle on.”

STROM: “Somebody’s got to fight for us.” SBCA’s role, Steve says, is to “help everybody stay on the same page so we’re not fighting against each other” when it comes to government regulation in the industry. It’s never a bad thing to have friends along. “I’ve really enjoyed the people that are with the organization. Everyone I’ve met has been very friendly.”

What challenges is the industry facing?

GREEN: “The margins in this industry have been significantly compressed,” making the market tougher for small, independent component operations. “And second, of course, is labor. Design labor, shop labor, sales labor—all labor is dear right now.”

STROM: “Everyone in the industry—even other industries—everyone on the west coast—is having trouble finding labor. That’s one of our biggest challenges right now: we just can’t find people to work for us.” Steve says The Truss Company is working with other manufacturers “to get vocational education back into high schools,” but building a high-school-to-truss-production path is difficult. “You have to be 18 to work in the shops; there’s not a lot of mentoring you can do toward high school kids. I think that’s a drawback.”

How are you meeting those challenges?

GREEN: Truswood, Dave says, is looking for “quality, hard-working people and training them, rather than trying to recruit. I think we do more training than recruiting these days,” he says, because it’s proven to be a more stable hiring strategy. Dave sees it as an industry-wide shift, and one that SBCA facilitates. “SBCA provides a lot of tools in the areas of design and shop training,” Dave says—tools that he wouldn’t be able to create in-house and without which he’d need to rely more heavily on recruiting.

STROM: “I think the industry is moving towards more automation all the time.” The question the industry is always trying to answer, Steve says, is how to build faster with less labor. “We’re probably producing the same amount now as we did in 2004 with 15-20 fewer people. I think that’ll help,” he says, “but it’s not enough.” Technological advances like 3D printing could address the labor issue, he says, and he sees more technology is the long-term industry trend. “We’re headed toward whole-house design,” Steve predicts. “I think, residential-wise, we’ll be doing all the engineering and design work.”

What keeps you busy (beside trusses)?

GREEN: “I’ve got two sons and a daughter, and I love the outdoors; so I spend as much time outside with them as I can.” And SBCA activity doesn’t have to get in the way: “My son lives in Montana,” Dave says, “and I got to see him when I went to the quarterly meeting!”

STROM: “I play a lot of softball. I ride my motorcycle a lot. And I have five children, so family takes up a lot of my time.” 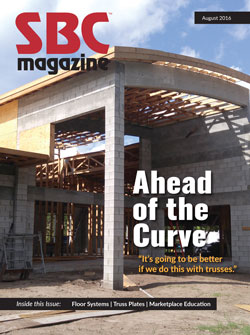 Fast Foundations Start with Floor Systems
We Are All in This Together!
Do You Know What It Takes to Pick the Perfect Plate?
Ahead of the Curve
A Personal Approach