Natural Disaster: How Zeeland Stormed Back

Natural Disaster: How Zeeland Stormed Back

After a tornado decimated one of its Michigan truss plants, Zeeland took advantage of the unexpected chance to rebuild and grow.

“Stay with us. We’re going to get through this.
Your jobs will be saved.”

Mike Dykstra repeated this message to his staff again and again in the days after a tornado whipped through his truss plant in Wyoming, MI. As president and CEO of Zeeland Lumber & Supply, one of his top priorities after the storm was to communicate clearly and consistently to staff, customers and the media. His message: “We will find a way to make it work.”

On the night of July 6, 2014, 100-mile-an-hour winds blew into town and collapsed the roof of the Zeeland truss plant. Dykstra said the company didn’t have a particularly robust disaster response program in place, but fortunately the six people working third shift that night followed the training they’d had: they ducked under the truss table just before the roof collapsed onto it, and everyone walked away without injury.

In the morning, Dykstra said, “We really just had to think on our feet and do what was best,” with both staff and customers in mind. To serve customers, retaining staff and finding temporary production space was the top priority. A year-old Zeeland facility in Elkhart, IN turned out to be a great help, although making use of it did require a lot of flexibility. “We had production capacity available in this new plant,” Dykstra explained, so thirty or more production staff were temporarily transferred to the manufacturing facility 100 miles to the south. With a two-hour drive each way, the crews would work four 12-hour shifts and stay in hotels before communing back to Wyoming, MI. Their flexibility helped Zeeland continue to manufacture product, and by shifting the jobs to the Elkhart plant, Zeeland retained their experienced staff.

“We owe it all to our staff and customers.”

With the sacrifices staff members were making, Dykstra said, “it was a race to the finish line to get up and going again,” because restarting production meant getting everyone’s lives back to normal. Having been through disaster recovery situations before, Zeeland Truss and Components General Manager Dean Dehoog said he knew exactly how critical it was to “stay in front of staff and keep communicating with them.”

Years earlier, Dehoog was in the unfortunate position of overseeing the shuttering of a Trussway manufacturing plant that burned down. Larry Wainright, SBCA’s Director of Code Development and the plant’s Design Manager at the time, recalled that most of the Trussway staff found other work very quickly. “A great many of them left that day and drove to the competitors five miles down the road,” Wainright said. In fact, quite a few of them moved, along with Dehoog, to Zeeland. Now with a plant in ruin for a second time, Dehoog said he knew that the first thought in staff minds was, “Oh, great. We’re going to lose our jobs again.”

However, this disaster recovery process was different. The leadership team stayed calm and focused, Dehoog said, and they put in the extra hours needed to take care of everyone and bring the Wyoming, MI facility back with its talent and market share intact. “We owe it all to our staff and customers,” Dehoog acknowledged. Their flexibility made all the difference as the Wyoming plant rebuilt. In the end, Dehoog said, “We really didn’t lose anybody.”

In addition, Dykstra recalls a very responsive local community. The chamber of commerce offered its conference rooms as temporary office space, and suppliers stepped up to provide new equipment as soon as possible. Along the way, Dehoog notes, it was nice to know that the SBCA community was thinking of Zeeland and following their recovery efforts.

“We were up and producing trusses by mid-December,” Dykstra said. In May, design staff moved back into an office space that had been entirely redesigned before being rebuilt. “We really worked hard to find out what the latest trends were,” Dykstra said. He’s heard visitors say the new offices, filled with natural daylight, are more typical of high-profile technology companies like Microsoft or Google than of manufacturing plants. It’s just “one piece of the puzzle,” Dehoog said, in finding ways to attract and retain young talent.

“Our perspective on risk management has been changed forever.”

Zeeland is now a year and half into recovery from the tornado. The process was tough, Dykstra and Dehoog said, but they see a company that has pulled through. “We’re better and stronger, without any market loss,” Dehoog noted. In fact, Dykstra and Dehoog estimate that Zeeland’s market share has increased due to the rebuilt plant and its focus on staff retention throughout the recovery. And that’s not the only change.

Zeeland has upgraded its IT infrastructure to ensure full data recovery in the future. Managers now put much more time into analyzing insurance policies, with a particular focus on business income interruption coverage. (Is your coverage everything you need it to be?).

In general, Dykstra noted, they’re much stronger as a leadership team. “When there’s a crisis,” Dykstra observed, “that’s when leadership really happens.” In addition, he said, Zeeland’s commitment to staff safety training “has never been greater.” The same is true of general interest in safety training now, especially training related to bad weather. “It’s a little more real to our staff,” Dehoog observed. “Everyone takes training more seriously now.”

Today, Zeeland has more capacity than before the tornado. It has new equipment, expanded office space, and a workplace culture focused on protecting that investment. “Our perspective on risk management has been changed forever,” Dykstra said. With more designers, more production staff, and a growing operation all around, Zeeland’s story is much more about recovery than disaster. The company is in a better place now than it was before the tornado, Dykstra said. “It feels good to be here.”

We want to hear your company’s success stories. Email editor@sbcmag.info. 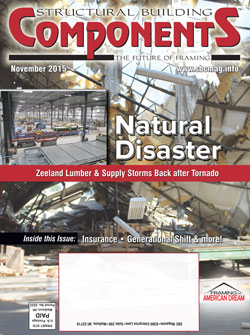 Insurance: Check Your Coverage
Generational Shift in the Component Industry
Natural Disaster: How Zeeland Stormed Back