Getting the Big Picture: The Evolution of BCMC Over the Past Decade

Getting the Big Picture: The Evolution of BCMC Over the Past Decade

This year, BCMC will celebrate its
35th show as it returns to Milwaukee, WI.

We thought it would be a fitting time to take a brief look at how this annual industry tradition has evolved over the past 10 years. As you can quickly see from Figure 1, 2005-2014 was a roller coaster of a decade for the industry, and by extension, the show. We’ve created a timeline that includes the show location, theme, number of attendees and show floor size for each year. However, this timeline doesn’t tell the true story of what BCMC is about and the communal value it has provided component manufacturers and the broader industry. To begin to get at the heart of the value of BCMC, we sat down with five component manufacturers (CMs) who have attended a majority of the shows since 2005 to share their perspectives.

Tim Riegel, Engineering Manager at Rigidply Rafters, Inc., has only missed one BCMC show in the past 20 years. “Of course, back in 2004 through 2006, BCMC was enormous. We were building two million plus housing units each year, and there were a lot of truss companies out there as a result. In addition, there were more plate suppliers and equipment manufacturers that needed space to exhibit their particular products.”

Indeed, the housing boom brought a lot of people into the industry, including entrepreneurs like Gary Schrock, Owner of Roof Tech Truss, LLC. “I opened my plant in late 2006, which in hindsight, was not the best time to start a truss manufacturing operation. I attended my first BCMC in 2007 to meet other manufacturers and learn from them. I started out small, and the ability to meet so many suppliers and other company owners in one place was incredibly valuable.”

The strong housing market also enticed companies to expand their business models to include component manufacturing in order to further grow their market share.  One such company was DuBell Lumber. DuBell has been a full-service lumber yard since 1940, and they opened their own truss plant in late 2005. Darren DiMedio, General Manager of DuBell’s component manufacturing facility, recalled, “We went to BCMC in 2004 initially to learn more about the industry and gather information about what it would take to open and operate our own component manufacturing facility.” DiMedio’s brother initially ran the facility and attended BCMC in 2005 and 2006, but when he left, DiMedio took over and has attended BCMC ever since. “In the beginning, I was going just to meet people and learn how general managers at other truss plants solved the problems I was facing. It was a great place to learn the best practices of others that we could incorporate into our own facility.”

Finding Value After the Boom

When housing starts dropped off, so did BCMC attendance. There were many reasons behind the drop in attendance. One was that fact that between 2007 and 2010, nearly one in three CM locations closed their doors. It was also difficult to get away from the office. For example, David Mitchell, General Manager of Engineered Building Design, LC, missed only one show since the early 2000s. “I was signed up to go to Charlotte in 2010, but at the last minute I had to cancel to go to a customer sales meeting. The housing market was tough and I needed to stay home to get that customer.”

However, according to the CMs we talked to, the drop off in attendance had some advantages. “I think the people who attended BCMC in the years after the downturn were the individuals who are serious about our industry. They were the decision-makers and leaders who were committed to not only learning how to survive, but also how to position their company and the industry to prosper once housing came back,” said Riegel.

The common theme among the attendees we spoke to was that during the down years everyone was focused on survival. People came to the BCMC show to learn as much as they could from each other and to support others who were facing the same challenges. BCMC provided a place for this community of survivors to band together and collectively navigate a very tough market. “It’s pretty clear the manufacturers who survived that prolonged downturn were the ones who knew what they were doing,” added Riegel.

DiMedio said, “I learned so much those first few years at BCMC. My plate supplier sales rep did a great job introducing me to other veteran general managers. The plant tours were also incredibly valuable. Having the opportunity to see first-hand how others ran their facilities was worth going to BCMC.”

Plant tours continued to be a key part of the value of BCMC every year. Keith Fell, Director of Manufacturing for Toll Integrated Systems, Inc. hasn’t missed a show for over a decade. “I always jumped at the chance to go on a plant tour. They’re extremely useful to see what others are doing, and sometimes to verify that what we are doing is right. We usually always took five to six people to the show and the tours always led to great conversations about how we could do things better.”

Beyond the plant tours and educational sessions, the ability to make in-depth comparisons and learn about new developments in production equipment and software remained the cornerstone of the BCMC show. Schrock provided this example, “Having started when I did, I always had to be very careful about my equipment purchases. I had to make sure I could pay for what I bought and not take on any more debt. During a conversation with a supplier at one BCMC, he let me know where I could find the saw I needed at an incredible price. That savings I realized from the lead on the saw more than paid for attending that show, and likely many, many others.”

Fell added, “Half the time we went to the show to shop for equipment, and BCMC was a great place to go and gather the information we needed to evaluate our options and make wise purchasing decisions. The other half of the time we went simply to plan for the future and learn as much as we could from educational sessions and conversations with other manufacturers. BCMC gave us the chance to see what was out there and what may be possible over the coming years, not only with our current suppliers, but with their competitors as well.  You can’t get that anywhere else.”

“If anything, I like the show more today than I did back before the downturn. The quality of the people, and the emphasis on education and best practices, makes the show more valuable to me,” said Riegel. In recent years, the “BCMC” transformed form the original Building Component Manufacturers Conference to “Building Community, Making Connections.” Everyone we talked to seemed to echo this sentiment, that the BCMC show’s greatest value was its ability to bring CMs and their supply chain together to foster long-term relationships and share best practices.

“Even during the smallest shows, there were still plenty of people I got a chance to get to know that helped make my business better. The shows always paid for themselves that way,” said Schrock.

Mitchell may have said it best, “The BCMC show has always been a great place to go to get away from the daily details of running the business. It’s easy to focus on those details and lose sight of the big picture. Going to BCMC helps me and my leadership team take a step back and see the big picture of where the industry is going. I always hear so many good ideas that get us thinking about how to improve our operations.”

While none of the CMs we talked to have been directly involved in the BCMC Build project that started in 2010, this charity build project has also significantly contributed toward the goal of building a stronger community within the structural building components (SBC) industry. Starting in Charlotte, BCMC Build partnered with Habitat for Humanity to fully frame a house for a deserving family in the three days prior to the start of the show.

This unique addition to the BCMC week of activities gives attendees an opportunity to give back to the community hosting the show, build lifelong friendships and simultaneously showcase the framing advantages of components. In 2013, BCMC Build began its current partnership with Operation FINALLY HOME, an organization dedicated to providing mortgage free homes to wounded veterans. The BCMC Build project this year will continue in that tradition, while also providing additional benefits to the industry through the Framing the American Dream project. (see “Renewing the Dream” in the August issue of SBC).

At its heart, BCMC hasn’t changed much since the boom years a decade ago. If anything, the CMs we talked to who have attended the majority of the shows during that time indicated the networking opportunities, educational sessions and plant tours have only gotten better. The ability to interact with multiple suppliers and peers and learn about the latest advancements in equipment, software and support services, can never be overstated. Further, the chance to participate in projects like BCMC Build, race on adult tricycles through the show floor, run in the 5K or shoot hoops for bragging rights, means there are many more opportunities to participate in building the SBC community and making connections with your peers.

For more details on the 2015 BCMC Show in Milwaukee and to register, go to bcmcshow.com. 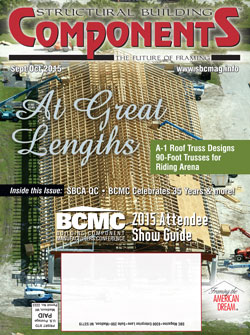 New Digs: SBCA’s QC Program Reloads with a Better Interface & New Layout
At Great Lengths: A-1 Roof Truss Designs 90-Foot Trusses for Riding Arena
Getting the Big Picture: The Evolution of BCMC Over the Past Decade