Some framers are having great success with a hybrid
component and conventional wall framing approach.

Material efficiency is an important aspect of the framing business and one that’s a concern for many general contractors and framing crews. It’s a simple fact in the construction industry that using less material means spending less money in both labor and material. This is clearly a broad brush and just one way through which to view material efficiently. We view material efficiency as a new method or an idea for performing the same process in a smarter way.

Innovative framing, the industry’s tag for what some folks call advanced framing, component framing or engineered framing, is the smarter way. Over the years, our framing businesses have become smarter and have started using component-manufactured truss openings on our jobsites. They’ve allowed us to increase our material efficiency on the jobsite while maintaining structural integrity and uniformity.

First, and possibly one of the largest advantages of using trussed openings (TO) (i.e., structural components that use truss technology to create window and door openings), is that site accuracy increases. Whether we’re framing window or door openings, we know component TOs were built in a controlled environment and perhaps even from a template. Using fixed machinery in a controlled setting results in lengths cut to exact specifications. This allows assembly to be carried out in exactly the same manner every time. On a jobsite, there could be 10 different crewmen cutting and assembling headers and rough opening members, and each one will cut studs and assemble the rough opening a bit differently than the other. TOs take that margin of error out of the building installation equation and ensure consistency for every one of the jobsite’s rough openings.

Second, TOs reduce field assembly production time. The old adage of “time is money” rings true on every jobsite, and when framing walls, the most time-consuming steps are those associated with framing openings. There are five different pieces that need to be cut and assembled to complete the design and framing of a rough opening: header lumber, fillers, jack studs, sill studs and cripple studs.

By eliminating the need for workers to make all those cuts, wall erection time is drastically reduced. TOs arrive ready for installation, and your crew is able to frame around them and move on to the next wall section. Further, if you have a rough opening design that’s complex or just out of the ordinary, TOs take the complexity off the jobsite and allow the component manufacturer (CM) to do it in the factory, which is generally much easier.

An added bonus in reducing site-cut studs is there are fewer scraps for the framers to spend time cleaning up and less waste going into the dumpster. It’s always imperative the floor is clear of any obstacles, whether it be tools, power cords or materials. Header and rough opening creation produces the most off-cuts and scrap wood of any of the steps in the wall assembly framing process. Obviously, taking time to clean up takes away from assembly time. Further, using TOs reduces lumber waste, which is all part of our material efficiency objective.

Third, innovatively framed TOs do away with conventional heavy timbers for header material. The second largest expense of building walls is 2x10 or 2x12 header lumber. With TOs, headers are designed much the same as an open web floor truss. 2x4 and 2x6 studs, which are much cheaper to buy, make up the header. Due to this, most TOs feature gusset plates (a.k.a. metal connector plates or truss plates), which add more stability to the header than conventional nailing used on site. Additionally, gusset plate connections are easier for third-party inspectors to see than nailing patterns.

A few indirect ways TOs can positively impact a jobsite include jobsite space and loads on walls. Consider the lack of storage space on many inner-city projects. How many jobs have we encountered with continual storage, movement space and installation efficiency issues? There’s no room for supplies; there’s no room for extra machinery, etc. TOs solve this problem since they’re delivered to the site pre-assembled and ready for immediate installation. There’s no waiting for assembly, there are less studs needed on site, and delivery is just in time.

Another potential feature that can be incorporated into TO designs is the ability to incorporate hold-down assemblies directly into the wall to counter uplift loads and provide more cost-effective shear wall designs for most wind and seismic loads. New products already in use allow framers to install wall systems that resist live and dead loads called for by the building designer. Most of these products are in the form of engineered wall panels, proprietary shear walls (a.k.a. braced wall panels) and portal frames with hold-downs. The possibility of using the same types of concepts and designs in TOs is easy to extrapolate. Greater innovation in the shear wall realm with TOs is just around the corner, and framers will be pleased to see these advancements.

Building a stronger structure at a faster rate with TOs is going to change the way we build. The possibilities for expansion of innovative designs are many and the time is now. Material efficiency is not a lofty ambition because it’s already happening. Innovative framing is the way of the future. Component TOs are just one of many ways we can rely on innovative designs to make framing better, faster and less expensive. Engineering and testing can go a long way in developing these systems, and the industry has a responsibility to demand it. The challenge is ahead of us; who’s willing to accept it?

George Hull is President of Hull Associates, LLC in Arlington, TX. He brings more than 35 years of framing experience as the first Chairman of the National Framers Council. Kenny Shifflett owns Ace Carpentry in Manassas, VA, and has been in the framing industry for more than 40 years. He serves on NFC’s Steering Committee and chairs the Council’s Safety Subcommittee. For more information about the NFC, visit framerscouncil.org. 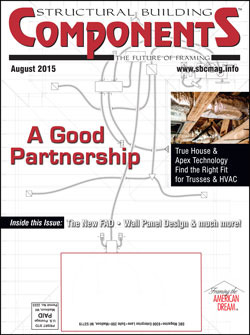