Perfect Form: The Value of Engineering & a Well-Executed Plan

Perfect Form: The Value of Engineering & a Well-Executed Plan

Last summer, Superstorm Sandy caused an estimated $65 billion worth of damage in the U.S., a total surpassed only by Hurricane Katrina in American history. Sandy was the largest hurricane on record to hit the Atlantic Coast, at over 1,100 miles in diameter. So while it hit the New Jersey shores the hardest, according to the National Oceanic and Atmospheric Administration, its disastrous effects were felt as far inland as Wisconsin and Michigan.

While the chaos and destruction wrought by this powerful natural force is sobering, it’s hard not to simultaneously focus on the positive stories that came out of such events. One such story is that of Cussewago Truss LLC in Cambridge Springs, PA. It’s a tale of the marvels of wood, the value of engineering and the fruits of a well-executed plan.

About a mile inland from Lake Erie, Route 5 crosses Walnut Creek on an old bridge between Erie and Fairview, PA. To call it a bridge is perhaps overstating the fact a bit. It’s really more of a pair of large tunnels through which the waters of the creek flow into one of the mighty Great Lakes. Last year, the Pennsylvania Department of Transportation approved lengthening the tunnels by eight feet (four feet on each side) to make future widening of the road surface possible.

Initially, the formwork for pouring the concrete to extend the tunnels was made out of heavy-gauge steel (see top photo at right). When fully constructed, the steel lattice and plywood weighed over 17,000 pounds. Due to strict environmental constraints, heavy machinery was prohibited in and around the river, so the steel needed to be hauled down into the river and assembled by hand. It was a labor-intensive and logistical nightmare.

After pouring the first tunnel extension on the Northeast side (upriver), the steel structure was painstakingly disassembled and reassembled in the adjacent tunnel. However, on October 31, before the concrete could be poured, Superstorm Sandy’s torrential rains caused Walnut Creek to swell rapidly. The strong current pulled the steel structure away from the tunnels and carried it down the river (see bottom photo at right).

Eventually, the steel form had to be fished out of the river using heavy crane equipment. It was ruined beyond use, and state officials hoped there was a better way to finish the project. Enter Carter Lumber and Cussewago Truss LLC.

A Triangle in an Arch

“They came to me asking if we could make a round topped truss,” recalled Butch Tyler, an Outside Sales Representative for Carter Lumber. “I said I thought we could, and I knew the guy to ask.” That “guy” was Brian Otto, a Truss Designer at Cussewago.

“Initially, I got an email from Butch with a request for a quote. His first question was whether it could be done,” said Otto. “Followed, of course, by how much it would cost.” Tyler also sent Otto the layout of the steel structure for the profile and dimensions. “It was an interesting challenge trying to design each segment so the top chord profile matched as closely as possible,” said Otto. Once he got the profile close, he sent it back to Tyler with the cost estimates.

“They were blown away,” remembers Tyler. “They were practically falling over themselves accepting our bid.” Not only was Cussewago’s bid almost half the cost of the steel structure, it promised to be lighter and easier to install, not to mention more flexible to accommodate the slight differences between the three different tunnel openings where it would be used.

Otto worked closely with the engineers at his plate supplier, Eagle Metal Products, to get the design right. “Each truss was 28 feet long and 14 and a half feet tall,” said Otto. Cussewago typically didn’t design a component more than 13 feet tall, due to the constraints of its production equipment, so initially, Otto designed the trusses in two pieces with a piggyback truss to complete the profile in the center.”

Art Hernandez, P.E. and Matt Vinson, P.E. at Eagle worked with Otto on the project. They pointed out there wasn’t a safe way to connect the piggyback, given the forces involved, and worked to redesign the trusses as a single component. Factoring in all of the state’s parameters, and even figuring in the shock loading of the concrete as it initially came out of the chute and hit the formwork, they designed the trusses to withstand 800 pounds per square foot. “Because of the application, we turned the wind and snow loading off in the software and calculated it as a uniform dead load,” explained Otto. “The load duration was relatively brief as the weight of the concrete dissipates as it cures.”

For Hernandez and Vinson, it was an enjoyable challenge and a departure from the typical residential roof profiles. They had the opportunity to combine the strength of the arch, an architectural shape perfected by the Romans, with the power of the triangle, to design a truss to withstand this unusual loading condition. The duo was also able to optimize the truss configurations through adjusting panel points and web cuts to minimize the amount of material needed in their construction.

Each truss was designed to be part of a four-ply girder, which would be fastened together in the field. Again, no heavy equipment could be used during the installation, so each truss had to be transported and put in place by hand. Overall, the formwork structure needed to be 28 feet deep, so it required 14 four-ply girders spaced two feet on center. The top and bottom chords of each truss were constructed using Southern Yellow Pine MSR 2400, and the webs were constructed of SPF No. 2. Each single-ply truss weighed in at a hefty 500 pounds, making each girder an even ton.

Delivery of the 56 individual trusses was not without its challenges as well. “At 14 and a half feet tall, we needed special state permits from the transportation department,” said Otto. “It also meant that the state determined the delivery route, which was not a straight line.” For the final stretch of road, the state shut down Route 5 completely and diverted traffic. While the driver waited for law enforcement to shut the road down, an automobile accident occurred that had to be cleared away before the driver could deliver the trusses.

Once the trusses were offloaded, they had to be carried by hand down from the road and installed above the river one at a time. Before the trusses arrived, the crew installed a platform of steel jacks, which could be adjusted once the formwork was completed (see photo at right). “Those jacks were an integral part of the installation; they made it easier to build and install the forms,” said Tyler. “Really, they were what made it possible to remove the forms and move them after each pour was completed.”

“They would have preferred the trusses be clearspan, but the reactions at the heels were so high already, we needed to spread the support out along the bottom chord,” said Otto. “We didn’t specify what they needed to provide the supports, but we did specify the bearings.” The jacks provided four bearing locations for the truss assembly along their 28-foot length. “Once the assembly was completed and sheathed, they could adjust it right where they wanted it and lock it in place, it was impressive,” added Tyler. (See photo below.)

Applying the sheathing was also an interesting process. After the girders were assembled and the purlins were installed, sheets of ¾-inch plywood were affixed to the trusses using flathead Simpson screws. “It took a crew of three guys who would start at the bottom of a sheet, sink the screws in unison, and then move up the sheet a short ways and sink another row of screws,” said Tyler. “They let the screws slowly bend the sheathing to fit the top chord profile. It was amazing to watch.” (See photo at right.)

Once the sheathing was installed, they were ready for the concrete to be poured. “The concrete was added in sections, and there were a couple big pours they were concerned about,” said Tyler. “Turns out there was nothing to worry about. All the concrete pours went really smooth.” Once the concrete cured, the framing crew lowered the jacks and set about the difficult job of deconstructing the formwork and then moving it to the next tunnel opening. It isn’t too often you need to construct the same truss assembly on a jobsite three times, much less have to tear it down three times, but that’s exactly what they did. “They built the form in the most difficult tunnel opening first, upriver,” said Tyler. “They knew that, if it worked there, it would easily work for the other two tunnel openings downriver.”

In fact, the most nerve-racking moments of the entire project had nothing to do with concrete, but with water. Normally, Walnut Creek is a pretty calm waterway (see top photo at right), but heavy rains came again, raising the water level and current strength, which threatened to wash the wood structure down the river, much as it had the steel structure earlier (see bottom photo at right). Fortunately, the form held and work was able to continue once the waters receded.

Easy Is a Relative Term

“Russell Standard, the concrete and asphalt surfacing company that did the pours, was impressed with how easy the project went once they switched to metal plate connected wood trusses,” said Tyler. “Easy being a relative term.” They were so impressed, in fact, that Carter and Cussewago were quickly hired to do a similar project over 12 Mile Creek, not far away. “The tunnels are a different size, so we had to design and build a whole new set of trusses for that project,” said Otto.

It’s interesting to note, the trusses used on the Walnut Creek project will continue to serve a purpose, even though their formwork days are over. The surfacing crew from Russell Standard took them back to their yard, and plans to use them for the roof of a new warehouse they are building at their facility. “I went back and ran the trusses with the wind and snow loading turned on just to be sure,” said Otto with a bit of humor. “Turns out, they’ll do just fine.” 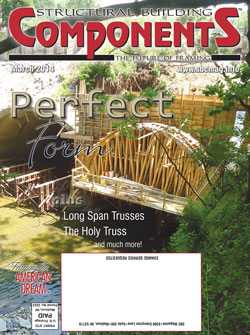