Installation of Interior Gypsum Board Finish

Installation of Interior Gypsum Board Finish

Gypsum wallboard provides an excellent example as to
why accurate design values are so vital to structural design.

Introduction: Why the Interior Finish Installation Is Important

For the most part, the interior finishes of a building are considered non-structural and are left to the owner’s/architect’s discretion. However, gypsum wallboard (GWB), the most commonly used interior finish, has a significant effect on the lateral load resistance of a building and is often included in the structural design. For example, the required braced wall lengths in the 2012 International Residential Code (IRC) account for the effect of interior GWB finish and must be adjusted, if it is omitted.

Also, a designer can use interior partitions of a structure that are finished with GWB to resist the wind or seismic loads and may call out a specific fastening pattern for these walls. Due to their role in the structural performance of the building, care must be taken to insure that the interior GWB finishes are properly fastened.

For buildings braced in accordance with Method Wood Structural Panel (WSP) or Continuous Sheathed Wood Structural Panel (CS-WSP), the 2012 IRC requires that GWB be installed on the side of the wall opposite to the bracing material. Table R602.10.4 of the IRC states that the fastening of the interior sheathing for Methods WSP and CS-WSP shall be in accordance with Table R602.3(1). In Table R602.3(1), the only gypsum product is ½" and 5/8" gypsum sheathing, which is typically used in exterior steel or wood-framed construction as a backup for siding, brick veneer and other similar cladding on single-family housing, apartments and light commercial buildings. Gypsum sheathing is required to be installed vertically and fastened with 1½" galvanized roofing nails, 1½" galvanized staples, or 1¼" Type W or S screws spaced 7" o.c. along panel edges and intermediate supports.

In the IRC, GWB and gypsum sheathing are two different things. The former is typically an interior finish, while the latter is typically an exterior product. (Method GB is defined as gypsum board, which is ambiguous. It could be either GWB or sheathing.) However, Section R602.10.4.3 clarifies that the fastening requirements in Table R602.3(1) are for exterior sheathing. Interior gypsum board may be installed as a wall covering in accordance with the less stringent requirements of Table R702.3.5. The commentary for Section R602.10.4.3 adds the following information:

In the 2009 code, a requirement was added that, for intermittent braced wall panels, regular gypsum wall board must be installed as an interior finish material on the side of the wall opposite the bracing material.

This makes it clear that, despite the incorrect reference in Table R602.10.4, GWB may be installed as an interior finish even though it is considered to contribute to the wall bracing.

For braced wall lines located in the interior of the building, Method GB may be used as bracing. As noted earlier, this method requires that the sheathing be fastened 7" o.c. along panel edges and intermediate supports. Method GB does not require that an interior finish material be installed on the opposite side of the wall, but the braced wall lengths must be doubled in accordance with Table R602.10.5 if the wall is single sided.

If the fastener spacing is decreased to 4" o.c. along the panel edges and all horizontal joints are blocked, the required length of bracing can be reduced by a factor of 0.7 in accordance with Table R602.10.3(2).

In the IRC, the contribution of the interior finish to the braced wall nominal unit shear capacity (NUSC) was considered to be 200 plf (ultimate strength). This is the same NUSC used to calculate the braced wall lengths for Method GB with sheathing on one side. However, for interior finishes fastened with screws, the fastener spacing can be more than double the fastener spacing for Method GB. For example:

This raises the question: Why is the same NUSC used for both applications?

According to Crandell and Martin, the “nominal unit shear strength of 200 plf is assigned to the interior finish based in part on interior finish performance in whole building tests.” The NUSC of 200 plf came from the design values in the Special Design Provisions for Wind and Seismic for ½" GWB  with 16" o.c. studs and 5d cooler nails spaced 7" o.c.

The Ad Hoc Wall Bracing Committee, led by Washington State Professor Dan Dolan, allowed this design value to be used for ½" GWB with 24" o.c. studs and #6 screws spaced 16" o.c. Thus, the NUSC of 200 plf used for interior GWB finish is not based on the results of individual shear wall tests; rather, it is a committee judgment of the expected performance.

Table 6 compares the different fastening requirements of IRC Table R602.3(1) and R702.3.5. The NUSC for all of the fastening patterns in Table 6 is 200 plf according to the IRC.

The SBC Research Institute (SBCRI) has performed cyclic tests for a proprietary customer who has allowed this work to be published, in accordance with ASTM E2126 on ten (10) 23' long shear walls sheathed with ½" GWB. Photos of the test fixture and test specimen are shown in Figure 1.

The walls were constructed of 2x4 SPF Stud grade vertical framing members and 2x4 SPF No.2 top and bottom plates. The joints between panels were taped and finished with joint compound.

As can be seen above, the IRC and SDPWS in combination lead to a great deal of confusion over the NUSC for shear walls that use the GWB capacity addition of 200 plf. With current field applications of GWB, it should be clear the expected shear resistance capacity of a typical exterior sheathed wall with an interior GWB applied does not meet the capacity expected by the IRC or SDPWS. In order to do so, galvanized roofing nails or Type W or S screws per Table R602.3(1) must be used.

SBCRI’s proprietary customer wanted to know what the typical GWB application was in the field and did the research needed to set a good typical installation foundation. In all the work that this proprietary customer undertakes, the baseline shear wall testing performed uses a 16:16 screw fastening pattern. The reason this is done is so that design values used in the market are accurate from a generally accepted engineering practice point of view. Further, more accurate and reliable engineered design can be performed along with a solid understanding of the engineering boundary conditions that may lead to unintended performance consequences in the field.

Given all of this, and since GWB is included as part of the wall bracing design, even when used only as an interior finish, it is important to verify that it is installed properly per the construction documents, the building code or SDPWS.

Interior finishes should be installed in accordance with IRC Table R702.3.5. Walls that are used as braced wall lines with Method GB bracing should be installed in accordance with Table R602.3(1). Research conducted by SBCRI shows that the fastening pattern is critical to providing adequate bracing strength and can be used to predict the capacity of a gypsum shear wall.

As has been stated frequently in the pages of SBC, many people rely on the derivation of design values, which have been codified into law through the codes and standards (e.g., IRC, WFCM, IBC, SDPWS, etc.), whether they are technically accurate or not. If the values are prescribed in the code it is the law and, as such, is relied upon in the market as accurate. As a consequence, it is reasonable to assume the law developers would seek to fix any inaccurate values. This is particularly true if empirical evidence shows the law is nonconservative in nature, which then generally leads to a lower than otherwise expected factor of safety. This is not necessarily bad, it merely should be transparently known so good performance and engineering judgments can be made.

No one other than the purveyors of the products, the product associations and/or the International Code Council (ICC) can assume responsibility for the accuracy of any code-adopted design values. All others must rely upon the law’s accuracy for engineering evaluation. Additionally, all users of the code and documents like SDPWS rely on the fact that manufacturers of code-adopted products stand behind the legally established design values that have been created by the associations that publish code-defined design values for a given commodity product. All equivalency testing and related engineering analysis use this code-defined engineering foundation rightly or wrongly. This is why SBCA has published its Design Value Policy.

It has been a strong desire of both SBCA and SBCRI to fully understand fundamental material properties and their single-element engineering performance, and then take that to the next level in developing a much better understanding of the performance of those raw materials in a real-world assembly. It is increasingly clear to us that reliable and safe building performance is predicated upon accurate design properties, engineering precision and a complete understanding of raw material engineering considerations needed for successful application or installation. The suppliers of these products are responsible to ensure that there is easy access to this understanding, along with any relevant factors that should be considered in that design process.

It clearly is in the best interests of the construction industry at large, as well as the truss and component manufacturing industry in particular, that engineering, and thus, construction, be entirely based on tested and accurate raw material load resistance data. This will not only improve construction performance that is based on engineering and is therefore safe, but will further allow for much better engineering-based judgments and certainly future engineering innovation. 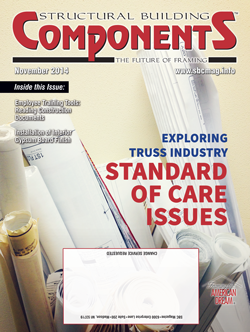