The Solutions Guy: A Tribute to Bob Halteman

The Solutions Guy: A Tribute to Bob Halteman

If you knew Bob Halteman, founder of Wood Truss Systems, or ever interacted with him, you knew he wasn’t a salesman. Sure, his job (and the purpose of his company) was to sell fabrication equipment to the structural components industry, but he wasn’t in sales. He was in solutions.

“My father always said his main objective was to be someone who, when you walked into a plant, the owner would look up from their desk and smile,” said Jay Halteman, Bob’s son and now President of Wood Truss Systems. “They would smile because they had questions, and he always tried to be the guy with the answers.”

There’s an old salesman adage, “don’t sell products, sell solutions.” Bob embraced this concept and embodied it in every interaction he had with his manufacturer customers. One such customer was Don Hershey of Imperial (see Don’s memorial article in the March 2012 issue of SBC Magazine). “I remember Bob coming in with several drawings of ways we could lay out our production lines and he walked me through the pros and cons of each one,” said Keith Hershey, Don’s son who held various senior management positions with the Imperial group of companies and is currently the Director of R&D and Industry Projects  for the SBC Research Institute. “They were so well thought out; I carried those plans with me and used them at other truss plants I worked at later on.”

“He was born in 1929, at the beginning of the Depression, into a long line of loggers and carpenters from rural Tennessee. During the Depression, his grandfather and father moved to the Midwest and had great success building homes,” said Jay. “He started framing for his father at the age of 20 and built his first pin-connected truss on a jobsite in 1954.”

When he decided to leave his father’s business, Bob went on to work in sales for Scholtz Homes, an architecturally progressive company that sold packaged homes with innovative designs to builders throughout the Midwest. It was there that Bob met Dave Chambers, who eventually left Scholtz to start his own component manufacturing plant, Imperial Components.

Above Left: Halteman, in the mid-1970s, doing take-offs for Imperial Components.
Above Right: Jerry Koskovich (left) and Halteman (right) at BCMC 2011 in Indianapolis.

Bob started his own home construction business in the 1970s, but went bankrupt in a housing downturn, and ended up joining his friend Dave, and worked alongside Don Hershey at Imperial. Throughout the 1970s and ‘80s, Bob worked with a number of the industry’s pioneers, from Chambers and Hershey to Bill Black, Bill McAlpine, Bob LePoire, and the list goes on.

Most of his contemporaries characterized Bob as an enthusiastic guy who was constantly upbeat. “He always had a joke to tell,” said Keith. “He also had a story for almost any situation. He was a great guy to be around.”

One of the things he joked about was that he had “termite blood” in him as a way to explain why he had such a love and passion for wood structures and for the component industry that grew during his lifetime. His early experience as a homebuilder and carpenter likely played a significant role as well. His experience with a business failure also contributed to his unique approach of helping other business owners find ways to make their production operations more efficient and cost-effective.

“He truly wanted others in the industry to succeed,” said Jay. “As he focused on their success, the sales just naturally followed.” Beyond helping individual companies thrive, Bob was also instrumental in helping several Midwest SBCA chapters (MI, IN, OH, KY, and IL) re-form and become active again in the late 1990s. He helped put together slide shows and presentations for building official and fire service groups, and spent countless hours sharing his enthusiasm and understanding of the components industry with them.

Because, in the end, he saw components as the solution to how homes should be framed.

Share a remembrance of Bob using the comments feature below. 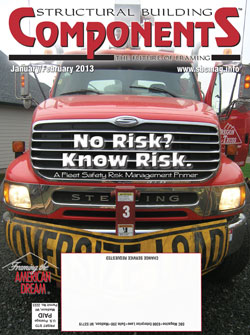