A Project of Epic Proportions

A Project of Epic Proportions

30,000 leagues under the sea? Depth of monster squid. 30,000 miles per hour? Speed of a meteorite. 30,000 pounds? Weight of a new U.S.bunker-busting bomb. 30,000 square feet? Size of a single-family home framed by Blenker Building Systems in central Wisconsin.

No, that’s not a typo. The house is epic, and as you can see, it has an impressive footprint. However, the most impressive thing about this house is not its size, it’s the process by which it was built. Jason Blenker, President of Blenker Building Systems (BBS), takes us on his company’s journey through that process.

Getting In the Door…

It’s probably not a shock that the completion of this home is four years in the making. Blenker was invited to participate in the bid process for the project three years ago. “We actually knew the owner who wanted to build the house; he owns and operates a local business,” said Blenker. “The owner asked the general contractor to request a bid from us.”

The relationship with the owner was forged through their mutual participation in community charity events. BBS believes strongly in giving back to the communities where their employees live and where they build homes. “Our community involvement also helps us meet other business owners who have a like-minded dedication to service. In this case, it was nice to be recognized by someone else for what we do,” said Blenker.

“This project was unusual in that, at the time of the bid, only about 30 percent of the drawings were done,” explained Blenker. “It was a design-build project almost from the start.” While with most of their residential projects the drawings are complete and they submit a hard bid, in this case, they found themselves working alongside the architect and building engineer to help them develop a budget.

“It was similar to some of the commercial jobs we have done in the past when we’ve been brought in by the contractor to help value-engineer the connections and ascertain the structural needs based on the architectural drawings,” said Blenker. In some cases, they provided a range of options, either through different layouts or different building material solutions, and left it up to the contractor to decide how much they wanted to spend.

…Then, Figuring out Where the Door Goes

Blenker points out that while most homeowners are typically concerned with how the building looks once it’s finished, in this case where the entire process was collaborative, the owner and contractor had the flexibility to decide what option they wanted to take. “If they found an option that did the job and saved them money, they could either choose to spend it somewhere else on the project or both enjoy the cost savings together,” said Blenker.

Just by looking at the photos, it’s evident there were several design challenges within this project. Blenker agreed, “Our designers had the opportunity to think outside the box on multiple occasions.” BBS strongly believes that any plan can be pre-built using components. While Blenker admitted this was the most intricate project they had ever been involved in, it was made easier because they were brought in during the design phase. “Ultimately, that saved us from a lot of trouble later on in the project,” said Blenker. “We were able to work through the various challenging pieces in a collaborative way with the architect and building engineer.”

One example, which Blenker pointed to as possibly the most difficult aspect of the house, was the front turret of the house (see photo at top of page). “Initially, the architect and engineer didn’t know exactly how they were going to build it,” shared Blenker. The plans called for a spiral staircase in the middle of [the turret], and there wasn’t an obvious solution how to do it. “We put together a few proposals, participated in a lot of back and forth between us and them, and spent a lot of time communicating.” In the end, the architect and the owner chose the option they wanted to take.

Unfortunately, there was only so much they could design for in the early stages. “There were so many things that weren’t decided on at that point,” said Blenker. “For example, we could figure out where the fireplaces were, but we couldn’t design for them because we didn’t know what materials they would be constructed out of, so we didn’t know the load the floor would have to hold.”

Fitting the Pieces Together…

Having unfinished plans created an interesting puzzle. BBS runs a turn-key operation. Not only can they contribute to the design, they also build and install the entire structure, including floor, wall and roof components. Due to the size of the project, BBS had to start manufacturing and installing components long before they knew what the whole house would finally look like. Blenker said, “We received initial figures in September, and by October we were already manufacturing some of the components.”

“One difficulty was having enough space for all the pieces inside our manufacturing facility, particularly the round pieces,” he added. “With an intricate project like this, we build the rooms in our facility to make sure everything fits, and then dismantle it and take it to the jobsite.” Of course, loading the components to fit on the truck trailers, and properly securing them for travel was another fun part of the puzzle to solve.

The single largest challenge was probably the build site itself. “Getting access to it was challenging because it was set in the woods,” said Blenker. Being in Wisconsin didn’t help things either. The threat of winter weather put pressure on everyone to enclose the building before the first big snow blizzard. “The middle portion of the house was the most complicated,” said Blenker. “The design of that portion of the house took more time, so we had to start with the two wings.” BBS had two crews and two cranes start at opposite ends of the house, and work toward the middle.

This approach was made a little easier by the fact the foundation was already poured. “It isn’t typical to have so many unanswered questions and have the foundation completed,” said Blenker. “However, it provided us a solid box to work in. With the foundation in place, we had the assurance there wouldn’t be major changes to the building layout.”

…and Completing the Puzzle

What was the best part of the project? Blenker said, “It was the uniqueness of the project and the opportunity it gave all of us to be creative.” It’s not every day a project comes along that gives both the design and production teams a chance to go beyond the conventional to find a solution to a problem. Ultimately, they were able to frame out and enclose the house before any major snow fell, and everyone on the project was happy.

For Blenker, having everyone happy started with good communication. “This project required a lot of patience, from everyone,” said Blenker. “Someone would ask
a question, but they had to realize the answer wasn’t typically just sitting on someone’s desk, it had to be figured out. That took time.” Add to that the pressure to keep the project moving forward, combined with the fact the building design was a collaborative process, not simply a “here’s the plans—go build it,” and it was no wonder constant communication was essential.

Do you have an interesting or challenging project you want to share with SBC readers? Email editor@sbcmag.info to share your ideas. 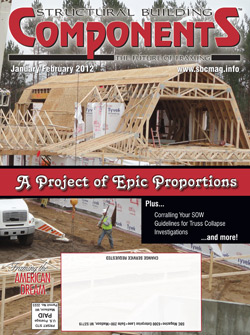 Corralling Your SOW
A Project of Epic Proportions