Assembling a Roof, from the Ground Up

Assembling a Roof, from the Ground Up

How do you build a house?

Traditionalists would say: Prepare the foundation, install the first floor, erect the walls, and then build the roof. That’s all fine and good; most houses should probably be built in this manner for one reason or another. However, one could argue that OSHA’s new fall protection rules raise the possibility it may actually be easier to build the roof before the walls, or at least, at the same time.

The BCSI-based, step-by-step roof component installation process (see sidebar below) assumes a traditional approach to installation, but one viable alternative is to do a portion of the roof assembly on the ground first, eliminating the need to work within OSHA’s fall protection guidelines. We will look at the conditions that may encourage a framer to choose this non-traditional approach, the process the framer should go through during ground assembly, and finally, issues to consider during installation.

As OSHA continues to ramp up enforcement of these new fall protection rules on residential jobsites, more and more builders are asking their component manufacturer suppliers for advice on how to install roof components and remain in compliance with the law. In response, SBCA has worked with OSHA to develop an online step-by-step approach to installing roof components under the new standard. This website also has a template alternate fall protection plan for framers to use when assessing fall hazard mitigation on a jobsite.

There are several factors that may lead a framer to choose the ground assembly method for roof component installation. The first, and most important factor, is means. In order to even consider assembling a portion of the roof on the ground, there needs to be sufficient space on the jobsite to accommodate setup. This approach also generally requires the use of a crane onsite, given a forklift typically will not have the lifting capacity for the completed system (although it has been done, see Photo 1).

In most cases, finding space should be possible, whether it’s on the driveway or access area, or a vacant area of adjacent land. The most important thing to consider when choosing an assembly area is that the space needs to be large enough to accommodate a five-truss assembly, and while the ground does not need to be level, it should be relatively flat to make set up of the bearing locations easier. One alternative to this, if space is limited, is to do the roof assembly on top of the installed floor deck (see sidebar below).

Since ground assembly does not require the use of conventional or alternate fall protection, and the assembled roof system can be used as an anchorage point for conventional fall protection once it is installed, framers may choose this method because it makes the fall hazard identification and mitigation problem much easier to solve.

At BCMC Build 2011 in Indianapolis, IN, Blenker Building Systems provided the lead framing crew for the two-story charity build. OSHA had recently enacted its new fall protection standards, so Blenker chose to assemble the roof system on the installed floor deck (see photos). This approach had two significant advantages: one, the floor deck was already level and provided excellent stability to the system as bracing and sheathing was installed, and two, the floor deck already provided a top plate layout, which eliminated the need for bearing location measurements. See Fall Protection Made Easy(er) from November 2011.

How to Do Ground Assembly

The first truss in the system can then be placed on the bearing locations and braced to the ground. Ground bracing should be done in accordance with the instructions contained in the BCSI-B1 Summary Sheet to ensure the first truss is stable and plumb. (See Photo 3.)

Then the next truss can be set using either 2x4s or other lateral restraint methods, again applied in accordance with B1 instructions. While setting the second truss, and the remaining three trusses, ensure each truss is plumb and spaced accurately before moving on to the next truss. (See Photo 4.)

Once all five trusses are set, install all lateral and diagonal bracing within the web members in accordance with either the instructions contained in the B3 Summary Sheet or a predetermined bracing plan. (See Photo 5.)

After the system is restrained and braced, apply sheathing to the top chords, starting at the peak and moving toward the heel using either 4x8 or 4x4 sheets of sheathing, in order to alternate the sheathing pattern. (See Photo 6.)

With the sheathing applied, hoist the assembled system in place and install on the top plate. (See Photo 7.)

Once the ground assembled roof component system is installed, install ground bracing to the first truss in the system as outlined in B1. This assembly can be used as an anchorage point for installing conventional fall protection. Each subsequent truss can then be hoisted into place, installed and braced. (See Photo 8.)

After each two additional trusses are installed, staggered 4x8 sheets of sheathing should be installed and fully nailed off. Application of the bracing and sheathing to the roof system will provide the necessary stability to move the anchorage point, as necessary, to complete installation of the roof. (See Photo 9.)

Ground assembly is relatively straightforward, but there are some additional factors to consider that may alter the assembly plan from job to job. The size and span of the roof components will have a significant impact on the bracing plan and the ground bracing necessary to provide stability to the system during assembly. In addition, as the trusses increase in size, additional rigging, including spreader bars, may be necessary to ensure stability of the system while it is hoisted into place. You will also need to ensure the crane equipment, and its setup on the jobsite, is adequate to safely lift the system into place.

Different roof configurations will have an impact as well. Ground bracing and installation will change depending on the first truss in the system, whether it is a gable end, a hip end, etc. In every case, the framer needs to have a ground bracing plan, as well as a truss lateral restraint and system bracing plan, in place prior to starting the ground assembly. 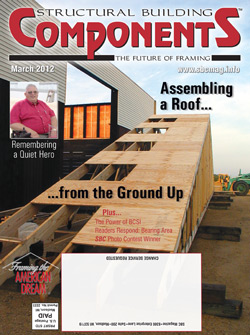 Assembling a Roof, from the Ground Up
The Quiet Hero: Remembering Don Hershey