A Window into the Future

A Window into the Future

A CM, a framer, and a supplier collaborate to significantly innovate shear walls. 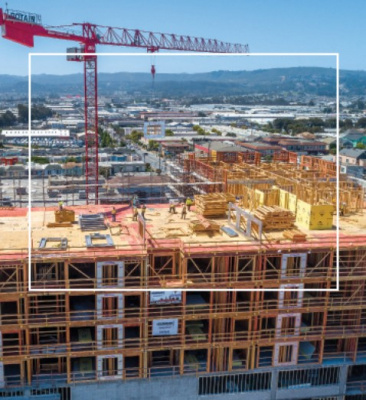 There are two trends in building construction on a collision course, and component manufacturers (CMs) hold the keys to an elegant solution that may have building designers, engineers, and framers singing their praises. On one side, real estate developers increasingly pursue wood framing to reduce material costs and construction cycle times. On the other side, architects envision larger exterior openings to bring in more natural light. In seismic and high-wind regions of the country, these two trends are creating considerable tension (pun intended) when designing shear walls with sufficient lateral force resistance.

Fortunately, two recent collaborations between California TrusFrame (CTF), a CM with four locations in California, Clavalo Construction, a California framing contractor specializing in wood component framing systems, and MiTek Inc., provide evidence that both trends can be accommodated with one simple solution: an enhanced cold-formed steel (CFS) moment frame. To appreciate what this approach offers to CMs across the country, it helps to understand what CTF and Clavalo had to do prior to using this structural product,
how the two worked with MiTek to bring the product into the field, and how the GC and other trades reacted to it.

While necessary, this approach was inefficient, time-consuming, and a logistical nightmare that many framers are still navigating today.

“In the cantilevered diaphragm world, building designers have been increasing the number and size of windows for many years,” says Clavalo owner, George Meyer. “That has moved more of the shear resistance elements away from the exterior of the building toward interior corridor and demising walls.” 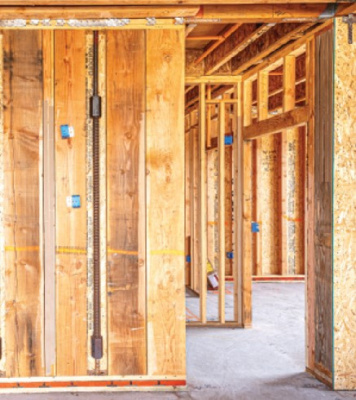 This trend has prompted the use of a lot of tightly spaced anchor bolts, metal tie-downs, clips, large-gauge fasteners, heavy timber, and double-sided plywood shear panels. Not only is this approach labor intensive during initial installation, it requires an excessive amount of material. Further, when you put that much wood into a wall, it doesn’t leave much room for the other trades to install the mechanical, electrical, and plumbing (MEP) infrastructure. “The worst part for us is it required us to stay on a job for months until all the other trades were done,” says Derek Meyer, project manager for Clavalo. “We’d then have to go back in to install all the alternate side shear wall panels.”

While necessary, this approach was inefficient, time-consuming, and a logistical nightmare that many framers are still navigating today. Like the high-wind loads of the Florida coastal regions, the seismic loading conditions in California serve as fertile ground for innovation because finding a better way to accomplish the same building resilience result can immediately pay dividends on every future job.

Initially, CTF worked with their framer customers to use the metal connector plate to create a better shear wall. “Smart Components” were born out of this effort (see November 2016 and Jan/Feb 2014 issues of SBC Magazine) and offered framers like Clavalo a revolutionary way to install shear walls without all the wood fiber in the walls or a second trip back to the jobsite after the other trades were done.

“We did our first project with Smart Components in 2008 and were really excited about the possibilities it offered,” says George. “It was definitely a significant improvement over the alternative, but it wasn’t a perfect solution.” 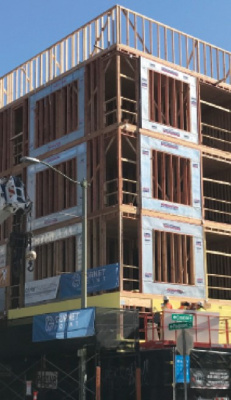 “The timing behind bringing this MiTek solution to market couldn’t have been better,” says Steve Stroder, CEO of CTF. “We were looking to evolve away from Smart Components and we saw how well their Hardy Frame Moment Frame product was performing in the California market.”

“The need for natural light has proven very challenging for engineers and building designers,” says Jesse Karns, MiTek’s director of engineering for lateral systems. “The large exterior openings reduce the space to install shear wall elements, which has driven us to look more closely at CFS moment frame solutions.” Up until now, Jesse says narrow CFS shear elements (such as MiTek’s Hardy Frame HFX panels) have worked well in smaller buildings of one to three stories but not as well in larger, multi-story (four and five stories) wood-framed buildings.

Consequently, Jesse and his team had been researching ways to adapt the moment frame for larger applications. By adding a CFS element to the bottom, they created a moment “picture frame” that could then be installed around exterior openings (see sidebar on page 27).

Aptly named, “Project 1” was the first opportunity for CTF, Clavalo, and MiTek to use the product. This five-story, wood-framed building had a very progressive owner who was open to using cutting-edge construction methods and materials. “Not only did we get to use the picture frame shear walls, we also framed the building using pre-fab wood walls and pre-fab stairwells,” says George.

As Project 1 was going up, Clavalo identified a second project that could benefit from using the picture frame. George convinced the owners of “200 Linden” to walk through Project 1. “Until you install new systems in a building that someone can see and touch, it’s hard to convince them to implement it,” says Derek.

The owners of 200 Linden immediately saw the potential and went back to the EOR to ask him to incorporate the picture frame moment frame into their project, an eight-story building with five stories of wood framing on top of a three-story steel and concrete podium. 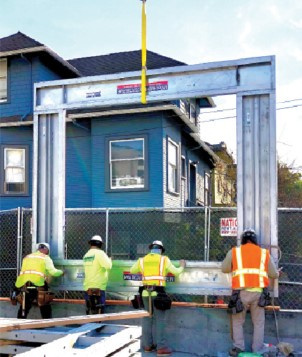 “This was done really late in the building design process, but it’s hard to argue with the results,” says George. Even with the engineering redesign and significant jobsite delays due to COVID-19, Clavalo still beat the original framing schedule by six weeks!

The MiTek “picture frame” moment frame has two elements: the CFS columns and the CFS header and bottom sill beams. The height and width of the frame can vary significantly, with header and sill beams up to almost 22 feet in length and a height up to 16 feet.

The frame was originally designed to match the thickness of a 2x4 wall but can also be installed in a 2x6 wall, allowing for the installation of additional insulation. Initially, the frame was conceived to fit between the floor and the double top plate of a wall but it can also extend into the floor space, and the floor joists can hang off the header and sill allowing for floor-to-ceiling wall applications.

While Project 1 provided the proof of concept, 200 Linden illustrated the potential MiTek’s picture frame product offers when a CM and a framer collaborate on a project. “This project moved incredibly fast, even amongst the initial COVID-19 outbreak,” says Jason Walsh, vice president of sales for CTF. “Each story was over 22,000 square feet of wood framing that went together in less than three months.” 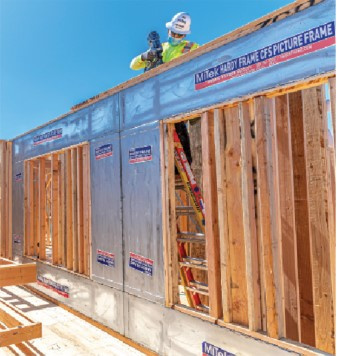 “All the trades are facing qualified manpower shortages,” says George, “so when a product like this comes along that allows your skilled framing crews to split up and be on more projects, it solves one of our biggest problems.” Derek noted they were able to achieve an astounding pace with a crew of only 30 framers on the 200 Linden project. If it wasn’t for the picture frame product, he estimates they would have been on the jobsite another eight to ten weeks.

When a product comes along that allows skilled framing crews to split up and be on more projects, it solves one of framers’ biggest problems.

Working with CTF and MiTek, Derek says the beauty of off-site construction was clear. “All the issues were addressed before we got to the jobsite,” he explains. “Even with this new product, we were able to figure everything out before we were there physically installing the walls.” He points to an additional advantage to being able to incorporate the picture frames into wood wall panels, saying, “it makes everything simpler, easier, and safer. Each piece of wood we don’t have to cut on the jobsite takes away an opportunity for injury and helps us mitigate risk.”

The best part of working with CTF, Derek says, is how it smooths integration of new framing products like the picture frame moment frame. “Doing all the layout and integration with a CM like CTF makes all the difference,” he says. “Together, we’re able to understand how all the systems fit together and how they can be designed and manufactured efficiently to go together smoothly in the field.”

Shawn Overholtzer, CTF’s COO, has used 200 Linden to start conversations with several other framers customers, encouraging them to talk with their building designers to incorporate the MiTek picture frame into future projects. “This is all about shortening the supply chain,” says Shawn. “MiTek works through their CM partners and we in turn partner with the framer to provide an elegant framing system to the building designer. They can have their large openings and the necessary shear resistance all in one system.”

The CM can design the entire wall, including the picture frame shear elements, manufacture the entire wall system offsite, and deliver it ready for installation. It’s incredibly efficient. 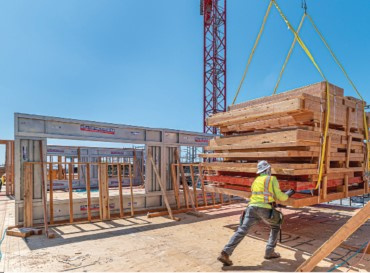 Steve points out that neither Project 1 nor 200 Linden are unique. The challenge of getting larger exterior openings and more space within interior walls while providing adequate shear resistance is one that has been growing for a long time in many parts of the country, not just California. “Every CM across the country now has an opportunity to look at this product, and others developed by their suppliers, incorporate them into the wood-framing systems they are making, and materially improve what they are offering to their customers,” says Steve. “We can help the construction industry get out of the piecemeal approach. By providing meaningful value-add within an overall framing system we can really have a significant impact on how buildings, like 200 Linden, are built.”

About the Author: Beyond serving as managing editor, Sean Shields has written for SBC Magazine since 2004. Over that time, he has focused on sharing the successes and best practices of component manufacturers to help others gain insight from their peers.