What’s in Your Backyard?

What’s in Your Backyard?

One CM’s decision to reach out to a local community college is a win-win for all involved.

Big C Lumber’s truss designer manager Dallas Austin says he has been “hearing other CMs talk about needing to get more involved with nearby schools” since he started attending SBCA Open Quarterly Meetings in 2015. With Southwest Michigan College (SMC) a mere mile and a half from their truss plant in Dowagiac, Michigan, there is a potential workforce literally in his backyard. The lumber side of Big C’s business had been attending career fairs at SMC for several years, but recently the company has stepped up their efforts and involved the truss plant as well. Dallas says conversations about workforce development with CMs from around the country “have been helpful in many ways.” Big C is now managing a flourishing relationship with SMC that has resulted in a pipeline of young, energetic new employees.

Last fall, Big C was a key player in SMC’s Saw Dust Day, one of the college’s primary outreach efforts to area high school students who are already involved in a construction trades program. With the ultimate goal of keeping these students interested in the trades, the event was designed to give students an opportunity to tour the campus, meet with SMC instructors and get a sense for the local companies that provide career prospects to SMC graduates. Big C Lumber’s president and chief executive officer, Bill Wallace, gave the keynote address and welcomed 180 high school students from four school districts to the November 3 event.

A graduate of a local high school himself, Bill shared his story of success in the construction industry and invited the students to “get in on the ground floor of what’s going to be an incredible run of new construction.” Building trade opportunities exist today “like I have never seen in my 34 years in this business,” he said as he discussed the effects of the Great Recession, a pent-up demand for housing, and the current labor shortage. Bill also made it clear that companies like his are willing to teach the skills needed for various careers but “hire for attitude.”

Dallas was joined at the event by Big C’s senior designer Adam Freyenberger and a relative newcomer to the company, Shawnee Gunnett. The band of three took turns sharing their stories about how they got involved in the industry, and then led an activity that gave students a real taste for what component manufacturing is all about. As a recent high school graduate and current SMC student herself, Shawnee was instrumental in designing the experience. “Those [high school] kids aren’t going to want to sit through a lecture,” she explains. “They want to see things and experience ideas.”

With that in mind, as Sawdust Day participants moved through their SMC campus tour and the various exhibits provided by local companies, the Big C crew kept things fun and interactive. They divided each group of 15-20 high school students into two teams for truss assembly races to “make it a game, get them active and communicating.” Each group had to read a truss design drawing to understand how the truss went together and used “plates” Shawnee fashioned from OSB to complete their assembly. In a few short minutes, she says, the exercise “showed the students both what the designer does and what the production end of it looks like.” She says she’s had people contacting her about components ever since – at least one from every high school in attendance asking for more information.

As chair of SMC’s school of advanced technology and lead instructor for the Construction Trades - Green Technology program, Larry Wilson has spent the past decade engaging with students and fostering their passion for the trades. “Last semester, students were talking ‘why construction versus factory worker, building widgets versus houses,’” he says and recalls one student’s declaration of why he chose the trades. “He said, ‘We build people’s lives, not just knickknacks and trinkets and parts. We build people’s lives.’ That’s the most astute thing I’ve heard from a 19-year-old in a long time. Fifteen years from now, those students, when they’re running their own companies, they can take their kids by and say ‘I built that and it’s still there.’”

In addition to his teaching responsibilities, Larry spends one day a week visiting with local high school students either in the classroom or on a jobsite, “evangelizing constantly.” He says it doesn’t require a fancy presentation to make his outreach to students valuable. “I have a well-rehearsed speech about how our program is put together,” he admits, but the rest is having a conversation with people about what their future could look like. “I ask a lot of questions about what they want to do after high school: who wants to go to college or get a job in construction? Who wants to work in fast food?” After covering the gamut of options, he says, “Then I ask how many people are looking for a career after high school? That’s usually when the hands go up and we have a conversation about what that might look like in the trades.”

Larry has played an active role in developing a winning relationship with Big C. “We take high school students and give them knowledge and understanding and then give them a place to use it at the end of the line,” he says. “It’s the best kind of relationship a program like ours can have.”

And it’s one that is going well for all involved: “Every one of my students that has interned with Big C still works there,” Larry reports and explains there are important reasons this is the case. “Big C works around the students’ schedules,” he says. “They’re open 24/7, which is very helpful. It speaks volumes. They want their employees to get their education so they can be even better employees.”

“We literally have a waiting list of students who want to come work here,” reports Dallas. “It’s fantastic!”

So, how does a component manufacturer sign up for that kind of problem? The folks at Big C and SMC would say it really comes down to the time you’re willing to spend building relationships. “School prepared Shawnee for our environment,” says Dallas. “You can teach design, but training someone who has had the actual experience of building a house is really helpful.”

When it comes to finding more “rock stars” like Shawnee, “you have to go out and look for them,” says Larry. “Reach out,” Shawnee concurs. “That’s the biggest benefit that we’ve received out of this,” she explains. “Taking the time to reach out to students is what makes a difference. If it weren’t for the people who took the time to come and tell me about the opportunities in and benefits of this industry, I wouldn’t be here. I would have gone into nursing or something else I might not have loved as much.” 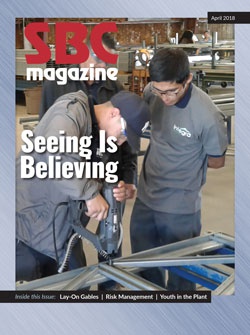 Seeing Is Believing
Know Your Risk on the Road
Upend Your Hip End Truss Sales
What’s in Your Backyard?