Two Sides of the Same Coin

Two Sides of the Same Coin

CMs and framers win and lose together – the NFC ensures everyone wins.

“I’ve been in the truss industry for 28 years, and a framing contractor even longer,” says Scott Stevens, president of Modu-Tech and immediate past president of the National Framers Council (NFC). “It’s clear that turnkey framing is growing rapidly, and more and more component manufacturers are going to find the framing contractor is their primary customer.” As framers increasingly buy their components directly, it becomes more vital for the CM and the framer to have a collaborative relationship.

To that end, the leadership of the NFC and SBCA are actively taking steps to prepare and support both industries to thrive from this trend. However, the success of their efforts depends a great deal on CMs reaching out to the framing contractors they work with and getting them tied into the NFC. Both the CM and the framer have a lot to gain by doing so.

“When it comes down to it, we are completely dependent on one another in the construction space,” says Pedro Loureiro, president of Nomad Framing and current president of NFC. “Increasingly, we represent one collective vendor to the customer.” He points out that, ultimately, the CM and framer are responsible for one step in the process: creating the structural framework of a building. They both win when the framework goes up and performs well, they both lose if it doesn’t.

Chris Tatge has expanded his business rapidly since he became involved in the NFC, crediting the many ideas he’s learned from the well-established framers in the organization.

Gene Frogale, president of Annandale Millwork and Allied Systems and a member of SBCA’s Executive Committee agrees, “It’s great if you make a high quality truss that’s exactly to spec, but if it’s damaged or not installed right by the framer, you’re going to look bad. The same is true for an experienced framer who installs a badly made product.”

“No amount of planning and preparation can shield you from a crappy framer. If things go wrong, they’re going to blame the CM. No one wins.”

Chris Tatge, president of Dynamic Construction and the incoming NFC president says it even more succinctly: “No amount of planning and preparation can shield you from a crappy framer. If things go wrong, they’re going to blame the CM. No one wins.”

Regardless of whether the framing contractor is the CM’s direct customer or simply the installer of their products, all four men agree that there is a lot to gain by framers and CMs moving away from finger-pointing when things go wrong and toward a partnership mentality where both entities have each other’s best interests in mind.

Scott suggests that a shift in mindset opens up a whole world of profit potential, “When the framer and the CM know they’re looking out for each other, they have the ability to find ways together to makes jobs more profitable.” As partners, he says they can design and construct more cost-effective structures as they leverage their separate areas of expertise toward one goal.

The project feature on page 16, as well as the one in the November 2020 issue, are timely illustrations of exactly what that can look like in action. Both RendezVous Urban Flats and Woodlands at Reid Temple were construction projects that demanded the best out of the CM and the framing contractor. As partners, they exceeded their customer’s expectations by relying on each other’s expertise and continually seeking ways to help each other out.

In general terms, Scott says, “the CM brings more focus to standardization and offers the opportunity of greater stability and professionalism for the framer. In turn, the framer strengthens the CM by helping them better understand the logistics of how to construct a building, so they can design a product that more effectively goes together in the field.” 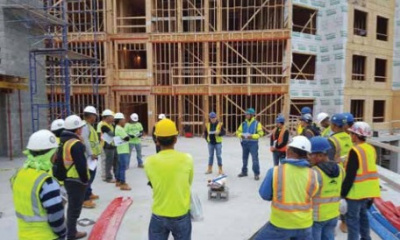 Gene says he wants to have this kind of relationship with every framer he works with. “We want our framers to know everyone on our team, so they know where we are coming from,” he explains. “We want our framers looking at our drawings ahead of time, going through our take offs and materials and asking questions. Many times they identify ways to make the building even better and we both benefit from that.”

What shouldn’t be lost is the fact that framers are increasingly a quite effective sales tool for CMs. Once a framer and CM have developed a strong partnership, the framer can many times drive business to the CM and open up opportunities for new work. “We’re the ones on the jobsite every day, building relationships with the general contractor and the other trades,” says Chris. As a result, their perspective on which CM to work with carries a lot of weight.

“We have always relied on each other, whether we’ve implicitly embraced that or not,” adds Pedro. “So we both benefit if we’re on the same side of the fence. That’s what building the relationship between the NFC and SBCA is all about.” 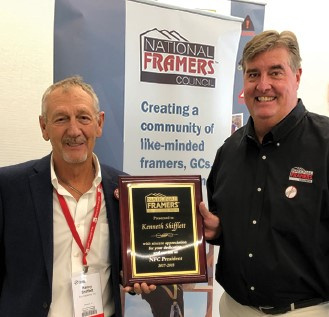 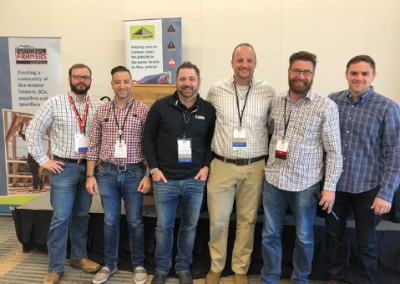 The NFC brings framers together during its annual Framer Summit at BCMC. Framers like Ken Shifflett (top left) and Scott Stevens (top right) have led the way, with significant help from framers like (above, l to r) Brian Groves, Pedro Loureiro, Lee Noland, Chris Breedlove, Chris Tatge, and Andy Sage.

Since its inception, the NFC has been about raising the professionalism of the framing industry. As a smaller framer, Chris relates to his own experience. “Bringing a framer in your market into the NFC will expose them to some of the best framers in the country and help them understand there is more to this than just swinging a hammer,” says Chris. “It opens their eyes to how they can become a real, legitimate business and not just a subcontractor.” He laughs and adds, “They can be professionals who don’t just pick up the phone and yell at someone when something doesn’t fit.”

Pedro says the mentorship approach within the NFC is one of its greatest strengths: “Our responsibility is to spend time with every new member to help them understand all the resources we’ve developed for them and expose them to all the good information both SBCA and NFC have to offer so that they can use it to improve how they do things.”

Getting your local framers engaged in a national community of framers focused on self-improvement is a good thing. Scott says the best part about the NFC is that it doesn’t cost much on the front end to invest in membership but there is a lot of reward to be gained. Through the NFC, if a framer has a software question or an accounting question and don’t have anyone to ask, they can get answers from other framers they don’t compete with but who may have struggled with the same issues. “There’s nowhere else for framers to go,” says Scott.

As members of NFC learn from each other, they expand their networks and gain perspective on how to enhance their businesses. Through the NFC’s close ties to SBCA, framers within the NFC are also exposed to the many living examples of how a close partnership between CM and framer yields extraordinary results for both. After all, as members of the NFC, they’re also members of SBCA.
“I think the relationship between the NFC and SBCA will ultimately make our products better,” says Gene. “Not only that, our trusses and wall panels will be installed better and more efficiently and that will lead to them being accepted by the builder more readily. We will expand our businesses more efficiently together.”

Take the Next Step

If you aren’t convinced you need to engage your framers in the NFC and down the path of a more collaborative relationship, Scott points out that that’s your choice. “But turnkey framing is the way the industry is going,” he says. “It’s becoming a necessity in multi-family projects and the national builders have noticed that and are following suit. What they do now, everyone else will be doing in three to five years. You can ignore the trend, but why would you?”

Chris suggests it is easy to identify which framers in your market to target. “The framers who are open to investing in a trade association membership are the framers you want to partner with,” he explains. “If they are open to learning from others and improving upon their business, they are the ones you want to have in your corner.”

As more framing contractors join the NFC, a whole different set of benefits become available to framers and CMs. “The more framers we have engaged, the closer we get to industry alignment,” says Scott. “It will improve communication. It will improve jobsite safety. It will improve the quality of the buildings we build together. It will increase the speed at which they go together. It will also give us more influence to change aspects of the construction process in ways that will further benefit framers and CMs.” Ultimately, he argues, it will allow everyone greater freedom to be more innovative.

Along the way, both Chris and Gene suggest that increasing the membership in NFC will help establish name recognition in the market. “I envision a day when NFC and SBCA membership will influence the decision-making process of the customer, where members will get preferential treatment based on the fact they are part of an organization that has proven to improve professionalism and performance,” says Chris.

Pedro adds that having a vibrant NFC and SBCA membership will also speed acceptance within the construction supply chain of the reality that CMs and framers are one entity when it comes to erecting a building’s structure. “So whether the whole structure is fabricated offsite and assembled onsite or a hybrid approach is used, everyone recognizes that the CM and the framer are a team that wins and loses together,” he explains.

About the Author: Sean Shields is managing editor of SBC Magazine. He can be reached at editor@sbcmag.info. 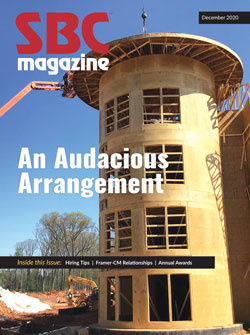