These Walls Will Floor You

These Walls Will Floor You

A framer shares how wall panels grew his business.

As a framer in the 1980s, Bruce Jones realized the industry needed a better wall panel, and he was determined to build one. And so, for over 30 years, he’s done just that, marrying componentized walls with some of the most intricate and demanding jobs along the way. Bruce made it work by being the component manufacturer (CM) framers want to do business with. The industry requires the same today, and every CM in the wall panel business has to, in some way, differentiate themselves from competition.

“You have to convince your client that your product design is the right dimension at the right opening,” Bruce says. “You also can’t just build panels and leave them with a framer to install. You have to teach them layout and the concepts of the design of your panels while they’re in the field to make certain they’re installing it correctly.”

Many of Bruce’s jobs require engineered designs that push the boundaries of everything from tall walls to rake and dormer design to balcony openings. He champions the efficiency of wall panels but insists success only comes from CMs establishing and enforcing control lines with everyone on site to avoid installation problems, confusion, slowdowns, and callbacks. Bruce shared several of his jobs with us, and detailed how he and his team use wall panels to unlock design and installation potential.

For this job, Bruce said his team created detailed stud placement layouts even before the concrete was poured. In situations where the building is framed on top of a podium slab and designs call for hold-downs and bolts anchoring into the concrete, performing the layout on the front end of the project saves installation time on the back end. Bruce points out that if a CM doesn’t plan ahead, more and more structural connections added to walls for uplift resistance will force framers to retrofit the panel in the field, essentially eliminating any labor savings.

“Some of the end walls on this site were 34 feet tall – the tallest walls we’ve ever attempted to build in our shop,” Bruce said. “One of them was made with 2-ply, 2x6 LSL studs to handle all the required loads.” In addition to the tall walls, Bruce’s crew had to frame in PSL posts on the far end of the building. They were set in a column base that was embedded into the concrete with through bolts. “The outer end wall pictured required our studs be double 2x8 LVL to meet shear loads. It was the most expensive wall we’ve ever built, and certainly the heaviest!” Bruce says.

Bruce admits the job could have been stick framed in the field, but chuckled at the thought of the work required to frame walls that large while taking load paths and bearing points into consideration. “Over stick framing, we probably saved 120 man-hours on that building,” Bruce said. “Granted, I might be giving 50 of those hours back on the design side so we can be more efficient on installation, but it was still a sizeable labor savings.”

“Had we stick framed this, it probably would have added two or three more weeks to our timeline, and that’s with at least a 10-man crew. There was just so much detail,” Bruce said.

Tall walls had to be fit around steel columns, round window openings were panelized, roof rafter work in the sanctuary was recessed below steel framing, and every arch and radius design was panelized, all in an effort to correctly follow load paths into and through the wall panels. Though the ceiling arches clearly aren't wall panels, the ability of Bruce's team to customize wall panels gives them the opportunity to panelize other framework to work with their wall panels. Bruce points out it's another way they're able to sell their design skills.

“This was a 157-unit project consisting of three apartment buildings, two townhouse buildings, and two garages that went up in four months in Abington, Maryland,” Bruce explains. “It featured a lot of rake walls on the upper level.” Rake walls, or walls that are angled along the top plate to match the pitch of the roof, are not uncommon, but far from routine in terms of assembling.

The job also called for the use of ZIP System® sheathing on exterior walls. It required Bruce’s crew to design the walls such that once exterior sheathing was installed, the sheathing around the floor joist covered both the top of the wall on the level below and the bottom of the wall on the floor above. Installing sheathing in this manner prevented Bruce’s crew from having to fasten metal strapping on the exterior of the building, which would have interfered with the ZIP System® sheathing.

“We ended up making the rake walls in the shop so our field labor took up less time,” Bruce explains. “We also built all the dormer walls in our shop for the rooftop and that allowed our sub crews to install everything together on the ground and then lift them into place totally assembled.” Making the dormer walls in the shop consisted of chalking the pattern off on the layout table and adjusting the wood jig to size. Once the first wall was built, it was used as the template for the remaining walls of that pattern.

“Each apartment unit had 16 dormers. A two-man team built all 16 in a day-and-a-half in the shop. Those same guys in the field? That would have taken probably two weeks to build,” Bruce says. “Furthermore, for safety’s sake, it made more sense to build them on the ground and lift them into place than to have framers up there, tied off, building dormers off the roof line.”

New Carrollton, just outside of Washington, DC, was a 245,000 square foot building that Bruce’s team worked on.

“This project featured hanging balconies, which needed to be designed differently,” Bruce explains. “The builder was having a problem finding someone to install them so we jumped in and took on that task as well. We had to cut the first one in the field after it had already been installed. Once we made that work, the rest of the openings were designed in the shop to match.”

There was concern over whether the balconies, being secured through the exterior wall as a tie-plate-to-stud connection, would pull the studs out of the wall.

The solution came in the form of redesigning the balcony opening by adding through bolts into double studs on either side of the opening, giving the tie plate a solid anchor within the wall. Additionally, inverted hangers at the top and bottom of bearing studs were added for extra resistance. Panels were capped off with flashing around the tie plates. The only compromise? “We needed to keep a larger space between panels on the truck during shipping to accommodate the tie plate protruding from the wall,” Bruce says. “But once on site they were stood and installed – wall panel, balcony tie plates, flashing and all.”

Could it have been completed with stick framing? Well, here’s the rub: there were 100 balcony locations on the job. The first test balcony, which was already installed, took two men 24 hours to cut apart, retrofit, and re-assemble. Compare that to the four hours it took to assemble one in the shop and the decision to panelize was pretty easy to make.

“It would have been real challenging to trust everything was in the location it needed to be and the dimensions were consistent at every balcony. We could build it in the shop the exact same way every time,” Bruce said.

The Lutheran Village at Miller's Grant

“This project was a 430,000 square foot building, one of the largest projects that we ever did. If you laid every sheet of plywood on this job end to end it would stretch 40 miles,” Bruce said.

We started in January during a bad winter. The road conditions were not good – we were mud trailing it. We walked off framing it in July. We were averaging close to 18,000 square feet per week. If we were stick framing it, we felt we would have had another six weeks in there. And in our prime, we were running 25 to 35 guys there. We cut off a month and a half by panelizing our walls.”

The build featured 18-foot balloon-framed tall walls and a centerpiece in the form of a radius roof line in the front of the building. At over 25 feet across, it took several panels fastened together to create.

“The radius roof line was pre-planned. We opted to panelize it because we could design it around the roof rafters, and we were actually able to use it as a nailer for the roof rafters so everything was able to tie in,” Bruce said.

To Bruce, wall panels are a key structural component that can be custom tailored to make every imaginable design work. “We’re now involved more on panel design with architects and designers than we ever were before. It has allowed us to pick our jobs,” Bruce said. And the cost savings in time, labor, and material is exponential.

But there are still plenty of obstacles, especially when it comes to framing labor. Wall panels can be seen as a threat to a framer’s profit structure. For example, a framer who charges five dollars per square foot to frame may see an income reduction with wall panels because he’s not framing, he’s installing, and it’s taking less time.

“That money has to come back. You have to convince them they’ll need less employees, the work will be more efficient and as a result, in the long run, he can make more,” Bruce said. “Invite framers into your shop, talk about how you build them and how walls are installed. Show them the benefits.”

Bruce’s job portfolio is a testament to the success and potential that’s possible when a CM designs framer-friendly panels. It’s worked for over 30 years on some of the grandest of stages and it’ll continuing working for many more. To see drone video of these jobsites, stay tuned to the digital release of SBC Magazine.

About the Author: Matt Tanger works closely with framers and component manufacturers to identify component production and installation best practices. 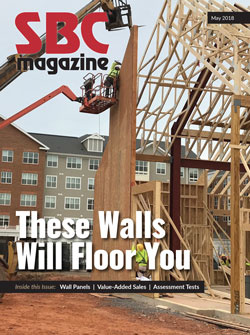 These Walls Will Floor You
Expanding Component Manufacturing Innovation: Introduction to the SBCA Unified File Format
Ties that Bind
Getting It Right the First Time
Looking on the Bright Side
Give Our Industry a Voice on Trade