Metal plate connected wood trusses are often used in buildings classified by the International Building Code as Type III construction (see Section 602.3 in the sidebar on page 30). The IBC requires exterior walls in Type III buildings be constructed with noncombustible materials (see Section 703.5.1 in the sidebar) which are materials that, under the anticipated use conditions of the building, will not ignite or burn when subjected to fire or heat (i.e., steel, steel hangers/connectors, concrete, etc.).

Fire-retardant-treated wood (FRTW) is commonly used in Type III construction, but it’s important to note FRTW does not meet the requirements of Section 703.5.1 to qualify as a non-combustible material. However, the surface-burning characteristics and fire-propagation resistance properties of FRTW make it a suitable option for exterior wall assemblies needing up to a two-hour rating. This is why Section 2303.2 allows for the use of FRTW in Type III buildings.

Since FRTW studs are allowed in wall assemblies that are otherwise defined as non-combustible, building and truss designers often confront the question does a joint between the wall and the roof or floor assembly mean that those elements of the building also require noncombustible material, like FRTW? To answer this, we need to study the IBC.

This is because even though a wall assembly provides bearing for a floor or roof assembly, the floor and roof are not considered part of the wall assembly. The IBC provides separate and distinct fire-resistance requirements for each, and specifies that untreated wood products are permitted in the floor and roof assemblies of Type IIIA buildings. The intersection does not change the minimum required rating of the independent assemblies because the intent of the IBC is to create fire endurance hourly-rated compartments, which are evaluated by an entirely different standard (ASTM E119).

Again, the goal of the IBC is to compartmentalize fires through hourly-rated assemblies, and those ratings begin and end at the gypsum wallboard barrier.  That being said, special attention does need to be paid to the intersection of the hourly-rated floor and/or ceiling assembly and the hourly-rated wall assembly to ensure that the fire resistance of the wall is not compromised.

Figure 1 is an example of a code-compliant intersection of a floor/ceiling assembly and an exterior wall in Type III building. The exterior wall is constructed with FRTW and has a two-hour fire-resistance rating. The intersecting floor/ceiling assembly is constructed with untreated lumber, as is the floor sheathing and the blocking between the trusses. FRTW is not required for those components because they are not part of the exterior wall assembly and are above the ceiling hourly-rated assembly gypsum wallboard layer. 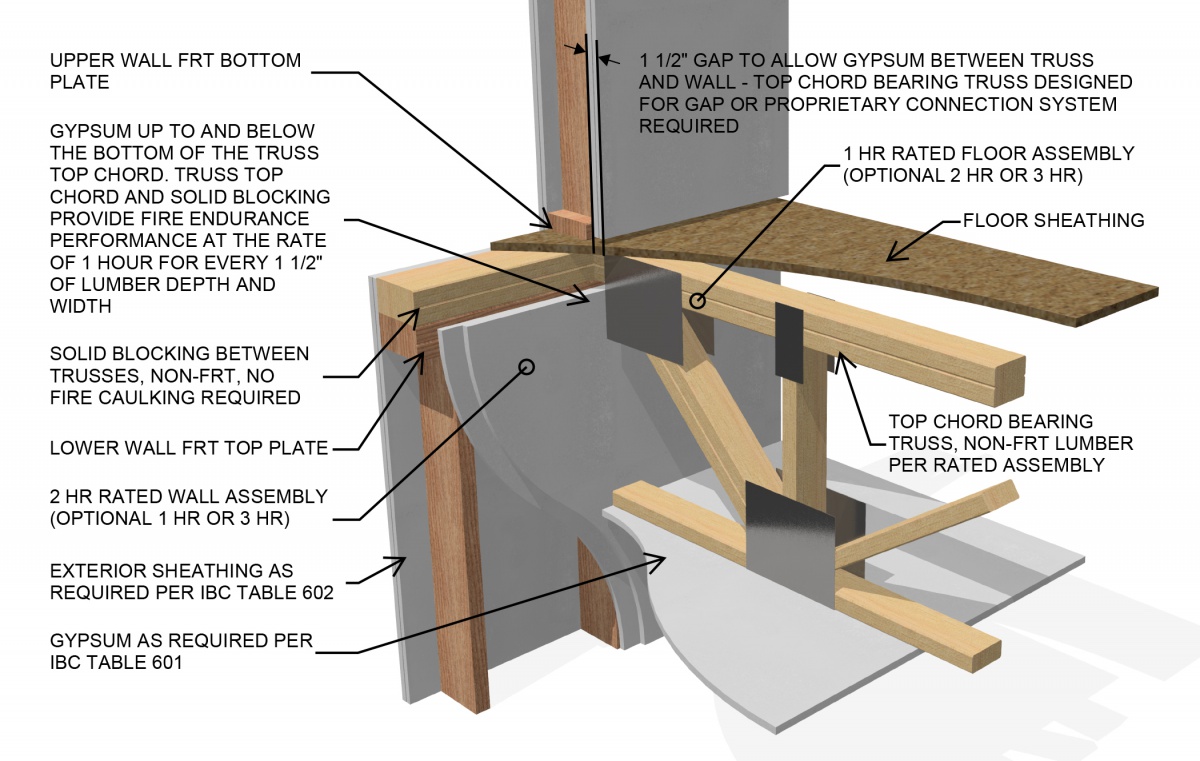 As can be seen in Figure 1, the interior gypsum can be run up to the bottom side of the double top plate of the truss, at the top of the exterior wall plate. With the specific requirement of blocking between trusses acting as firestops, installation of the gypsum and the trusses is made easier with this configuration. The blocking itself is thick enough to meet the relevant fire resistance and hourly-rated fire endurance requirements with established char rates of one-and-a-half inches per hour. This approach complies with all IBC related fire blocking, fire endurance and hourly compartment rating requirements.

Figure 2 details another accepted approach that is primarily used when proprietary hangers are deployed. The proprietary hanger supplier needs to be consulted for any installation requirements they may have beyond those shown that are more restrictive to ensure the final assembly conforms with the IBC. 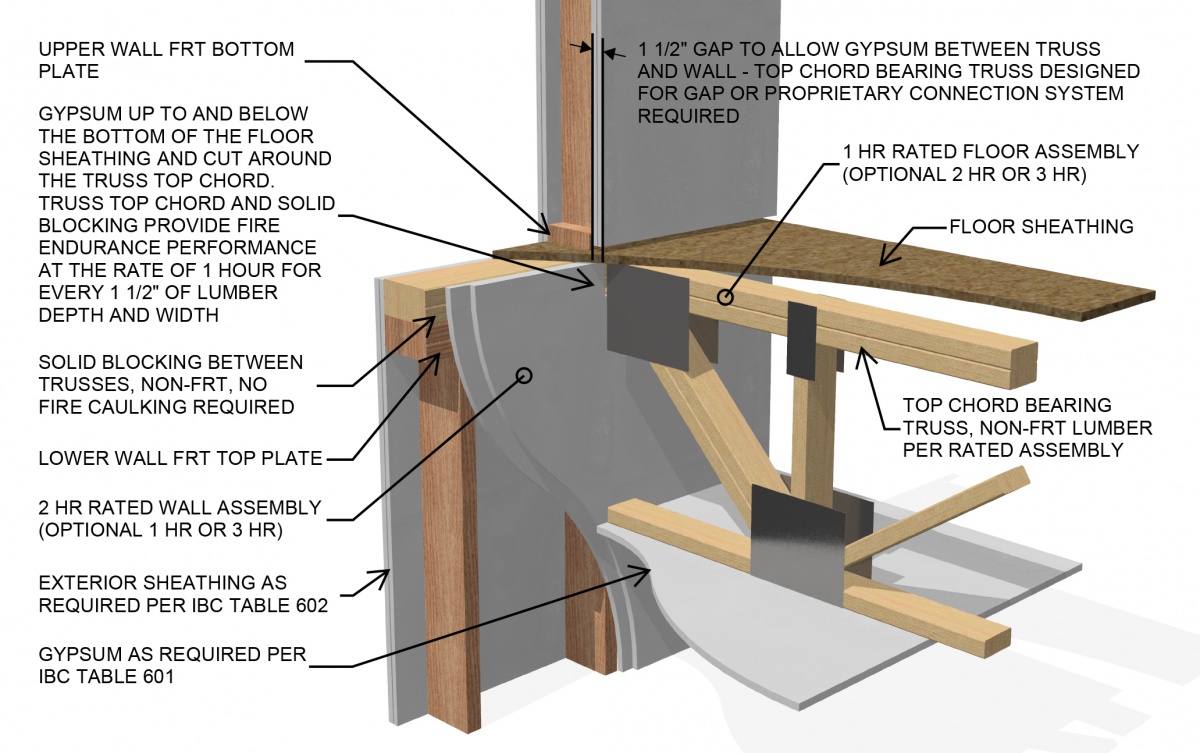 In the case of the Type IIIA construction, where the wall has a two-hour rating and the ceiling assembly has a one-hour rating, a joint providing at least two hours of fire protection is needed because the IBC requires the higher rating between two adjoining assemblies. Since the intersection of the floor/ceiling assembly and the wall assembly occurs where the gypsum layer on the floor/ceiling assembly meets the wall assembly, this is where the fire-resistant joint would need to be constructed. However, it’s important to point out if this joint is taped and mudded just like the rest of the gypsum on the fire-rated assemblies, this requirement is already met (i.e., there is no “joint” to be fitted with a fire-resistive joint system).

In conclusion, given the number of stakeholders (architects, engineers, product suppliers, firefighters and building officials) who participate in writing the building code, it isn’t surprising the language can sometimes be intimidating and confusing. This article has made four important points with regard to what the IBC says about Type III buildings: one, FRTW lumber can be used  in exterior walls; two, roof and floor trusses do not have to be made with FRTW lumber; three,  specific ASTM E119-tested or Section 722-calculated fire endurance rated assemblies (one-, two-, three-hour, etc.) are to be used to compartmentalize the building and contain a fire; and four, each compartment is treated separately from the inside space moving outward through the gypsum as either the wall sheathing or the ceiling sheathing for the floor or roof.

What this means is if the IBC requires a one-hour rated roof or floor assembly, that assembly must be constructed to meet a one-hour rating. The same is true for the walls. If the IBC requires a two-hour rated wall assembly, it must be constructed to meet a two-hour rating. As long as these requirements are met, independent of each other, the entire compartment meets the requirements of the IBC. 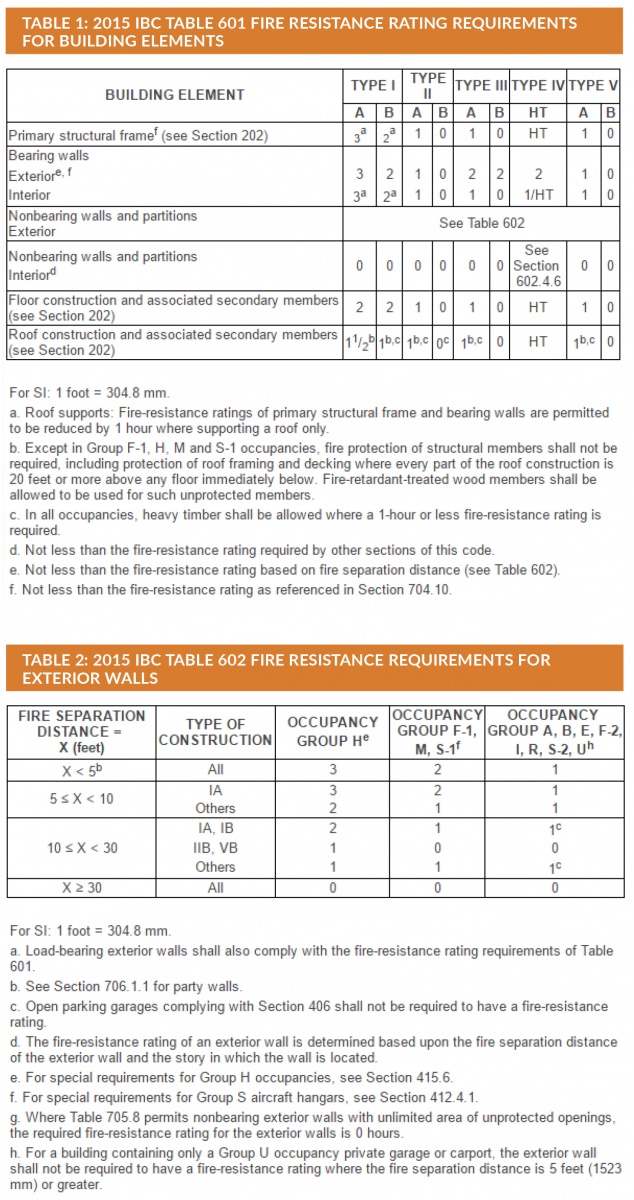 2015 International Building Code (IBC) References
602.3 Type III. Type III construction is that type of construction in which the exterior walls are of noncombustible materials and the interior building elements are of any material permitted by this code. Fire-retardant-treated wood framing complying with Section 2303.2 shall be permitted within exterior wall assemblies of a 2-hour rating or less.
703.5.1 Elementary materials. Materials required to be noncombustible shall be tested in accordance with ASTM E136.
2303.2 Fire-retardant-treated wood. Fire-retardant-treated wood is any wood product which […] shall have, when tested in accordance with ASTM E 84 or UL 723, a listed flame spread index of 25 or less and show no evidence of significant progressive combustion when the test is continued for an additional 20-minute period. […]
703.5.2 Composite materials. Materials having a structural base of noncombustible material as determined in accordance with Section 703.5.1 with a surfacing not more than 0.125 inch (3.18 mm) thick that has a flame spread index not greater than 50 when tested in accordance with ASTM E 84 or UL 723 shall be acceptable as noncombustible materials.
715.1 General. Joints installed in or between fire-resistance rated walls, floor or floor/ceiling assemblies and roofs or roof/ceiling assemblies shall be protected by an approved fire-resistant joint system designed to resist the passage of fire for a time period not less than the required fire-resistance rating of the wall, floor or roof in or between which the system is installed. […]

About the author: Jim Vogt, P.E., is SBCA’s director of technical services and has more than 25 years of experience in the industry. Kirk Grundahl, P.E., Andrew Morrow and Angie Protexter, EIT also contributed to this article. Grundahl has served as SBCA’s Executive Director since 1992. Morrow and Protexter provide engineering and design support to the SBCA membership.