Consider this creative way to engage your team in safety improvement

“After a lifetime in safety careers, I was beginning to dread safety meetings,” says John Moore, lean and safety coordinator for both component manufacturing locations of Franklin Building Supply in Boise and Jerome, Idaho. “It was always the same thing, and I was tired of the same old mundane stuff. I just kept thinking ‘we’ve got to put something different together.’” So, when John was promoted into his current safety role, he was ready to try something new: visual storytelling. 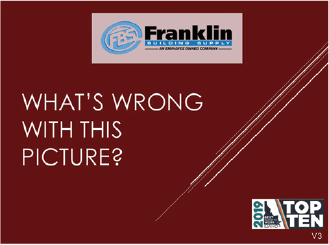 The concept came to John one day during a regular walk through one of their facilities. “I saw something safety-related I was concerned about, so I snapped a quick picture with my cell phone to show at our next safety meeting,” John explains. This exercise continued throughout several of John’s walk-throughs, snapping photos for subsequent discussion with the group. He even turned to the internet to find other, non-component manufacturing industry examples to add to the mix.

“I realized we had a pretty decent collection of photos focused on safety and housekeeping,” John recalls. Some of the photos pointed out problems they hoped to resolve, while others pointed out positive things the team members had done well. In order to easily and effectively use the photos in a safety meeting, John turned to an unlikely resource: PowerPoint. He realized he could easily place one image per slide and create a simple slide deck to present to a group. 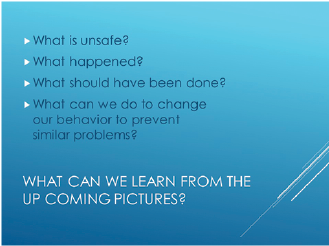 “It started a new activity called ‘What’s Wrong with This Picture,’” says John. The whole production team gathers during the daily huddles or monthly safety meetings and John begins by showing an image and asking the group if they see anything wrong (or potentially right) in the photo. Everyone then talks through the ideas and decides what needs to be done to correct a problem or give kudos for a job well done.

In the beginning, correctly identifying an issue would often result in a small gift card to a local restaurant, which provided a little incentive for people to step outside of their comfort zone and participate. Now, the program has developed a life of its own and employees are self-motivated to fix the things they find wrong. 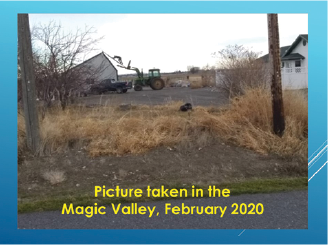 It’s important to note that this process developed slowly, with a couple of people asking John if they could submit their own photos if they noticed something wrong. Today, several members of the team submit photos periodically, even sending photos over a weekend because they saw good (or bad) examples while they were out with their family or friends.

The ongoing participation from the team has been outstanding. “I just keep marveling at how much this has transformed our team, how much more aware they all are, not just in the plant but in their personal lives, as well.”

As an example, one of the team members has taken this safety culture home with him. He noticed his young daughter tries to mimic how he works with tools at home. He now removes the batteries from his power tools when he isn’t using them to make sure she can’t hurt herself when he isn’t around. “He has this perspective because he does something similar at work every day, making sure the air lines at work are unplugged from the tools when they are not being used,” John explains. “Since implementing this and other safety measures that engage the employees, our reportable injuries are near zero over an extended period of time, and we’ve had a significant reduction in first aid cases.” 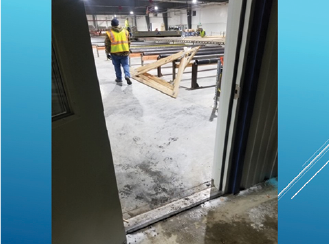 The key, John says, is keeping it fun, light, and educational: “This is about peers protecting each other. We never approach a photo with shame or fault.” He’s even gone as far as blurring faces out of photos to make it clear it’s not about “who” and only about working together.

John also emphasizes how important it is that everyone participates in the safety meetings, from the top down, and is encouraged by the significant support he has received from upper management. “In addition to other daily and weekly safety topics, we do this roughly quarterly now,” he explains, “and each time one or more of our management team comes out and participates in all of the activities from stretching to talking through the slides with us.”

If you’re looking for a new way to reinvigorate your safety program, engage your team, and bolster your safety culture, considering adding this creative twist to your regular safety meetings. All it takes is a cell phone camera and a little time for you to make an impactful point…PowerPoint, that is.

About the Author: Molly Butz worked with CMs to develop the original SBCA Operation Safety Program and has over 16 years of experience helping CMs develop and maintain safety best practices.