The search for simple solutions to common problems is what really makes the job of a truss designer exciting.

“Trusses are like big puzzle pieces that you can send out for someone to put together, flexible in design and modular in application,” observed Thom Patton, a truss design technician at a Builders FirstSource (BFS) location in Shelby, Alabama. “That’s what’s great about wood trusses.”

Those features were on full display in a project Patton worked on early this year: the roof of a school building that needed to be designed in a hurry. “The project manager said he had a framer that was ready to go as fast as I could get it designed and approved,” Patton recalled. For him, the rush was no reason to compromise quality in the design of a great truss system.

Instead of the 18 different trusses of various spans that the project originally called for, Patton designed a single common truss that could frame two-thirds of the building roof. The BFS production crew put together 277 trusses of a single type, he said, his “largest cluster to date.” It was a small design decision that had a big impact on the overall project.

Simplifying from the get-go

The project had three large sections, each with a slightly different roof profile due to corridor bearings or overall roof width. “There were common profiles across the long-span trusses that were changing due to bearing conditions,” Patton noticed. “The corridor walls change, and normally what we do in that situation is customize the trusses for every span.” In this case, a simple design change—using multi-ply flat girders and one common truss throughout the building, topped with three styles of piggyback trusses—kept the project within the school’s tight budget. Even better, said Patton, “it saved an enormous amount of work on our end and out in the field.”

Creating a large run of identical trusses was ideal in the early days of the industry but is less of a necessity now with the customization that sophisticated design software and computerized saws accommodate. In this case, though, a large quantity of trusses with one profile and of one size made things easier for the shop, Patton said, and much easier for the framers. Here’s how he explained it in an email:

The project progressed in three phases: A, B, C. There is a series of T-label trusses: these are the common trusses for the entire project. I had the T-series designed and sent to production along with A-series piggyback trusses. Our crews built the A-series and shipped. Immediately, they set up the jigs for the T-series and spent the next week building and stacking what wasn’t required to install alongside A. As the remainder of the C and B piggybacks were built, the crews would either pre-ship or send along enough T-series trusses to fill the shipment. This greatly reduced our labor by literally having the same 30-foot jigs on the same tables for several working days. This also kept a steady stream of trusses moving to the jobsite for a framer who wanted to keep the ball rolling.

Despite his atypical design strategy, Patton says the project overall was, “kind of an everyday thing, as far as multi-family goes.” Even so, critical thinking and careful planning was what made the project a success. “I think simplifying from the get-go and evaluating the project as a whole really helped ensure that nothing became an issue.”

Thinking beyond the shop

The school Patton designed trusses for was a big project—huge, he recalled, but clean. “Challenging, but not cut up and ugly.” That result was a combination of both design experience and a perspective that doesn’t end at the door to the design office.

Having one, interchangeable carrying truss throughout the building wasn’t the only framer-friendly design choice Patton made. “Rather than splitting the long spans twice,” Patton explained, “and letting the common trusses sit over a classroom and a corridor, I split it so you have common trusses over the classroom and an offset square truss over the corridor, sharing the same bearing.”

The piggybacks all had extended 2x6 top chords so they could be easily toenailed into place against the offset commons. Load was transferred through the piggyback, into the three-piece truss and into the rest of the structure in a way that minimized the number of purlins required over the common trusses. It also left a clear HVAC corridor and put the ductwork above the hallways instead of the classrooms—an optimization that maintenance crews, teachers and students might never realize they’re enjoying.

“These aren’t really benefits that I’m going to witness,” Patton noted, but they make framing easier for the jobsite crew, reduce the potential for missteps during installation and result in a better building. They’re details that can be addressed only by a good designer paying close attention at the design stage.

Patton said it was the framers, though, that he really had in mind. “I make it a point now to remember the guys actually sweating.” Patton confessed he wasn’t always so considerate or creative. “I couldn’t imagine having to brace some of my earlier design jobs!” he laughed. “Bracing, sheathing, decking and even hanging trusses all cross my mind when designing.”

In this case, he was able to design for both easy bracing and a minimal use of hangers. “I use a tinker-toy approach when possible: creating bearing ‘tabs’ and ‘slots’ for the trusses to fit together.” The girder design on this building accommodated end vertical bearing trusses that sit in place without hardware. Even hip framing was standardized in the base trusses to make installation as easy as possible.

“Hopefully one day I’ll have the skill and stamp to further reduce field labor,” Patton said. He’s eager to polish his design skills even more but he’s also adamant that learning from past mistakes and thinking big-picture to prevent future ones is something anyone can do. “I’m talking like it’s an amazing, outstanding thing,” he said of his work on this project, “and really all I did was look at it and see it.” Patton says the search for simple solutions to common problems is what really makes the job of a truss designer exciting. “What I learn on one project can affect all my future designs,” he explained. “It’s proof to me that there is latitude for innovation, which means there will always be something new to learn.”

Related article: Faces of the Industry 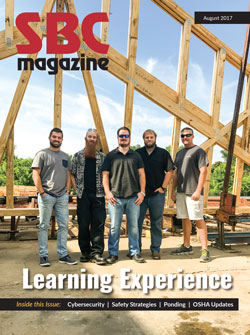 Guard Your Back (and your extremities)
Big Returns from Investing in SBCA Events
Faces of the Industry: Thom Patton
Parting Shots