Learn how one CM has perfected their Just-in-Time delivery approach.

Between builders increasing their focus on construction cycle time reductions and space on jobsites getting tighter and tighter, the need for just-in-time delivery (JIT) of structural components has never been greater. While this industry has always hung its hat on providing a certain level of JIT, doing it exceptionally well on a consistent basis demands a rigorous methodology and a dogged approach.

“It all starts with having one person solely responsible for each step in the process,” says Bobby Anglin, shipping manager for Southern Components Inc. in Shreveport, Louisiana. He says it’s up to that handful of individuals—a scheduler, production manager, yard manager and shipping manager—to communicate well to ensure there aren’t any surprises.

As soon as a quote becomes a job, only one person& should be communicating with the customer about an expected delivery date. It shouldn’t be the sales rep or anyone else. It should only be the scheduler.

It All Starts with the Scheduler

“As soon as a quote becomes a job, only one person should be communicating with the customer about an expected delivery date,” says Bobby. “It shouldn’t be the sales rep or anyone else. It should only be the scheduler.” 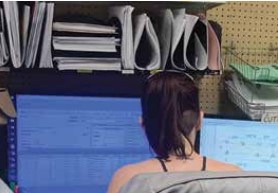 His point is that juggling multiple jobs in the pursuit of maximizing production and transportation capacity while trying to meet customer expectations is an exceedingly difficult task. Having multiple people talk to a customer and commit to a delivery timeframe when some of them don’t have a full understanding of all the other jobs in the pipeline can create a real headache for everyone. Bobby stresses, “you never want your sales reps promising a date and time that ultimately the company can’t deliver on.”

“The scheduler needs to be at the center of it all; they have a big responsibility,” says Bobby. “That means they need to have a lot of authority, too. They have to be ready to put their foot down when someone tries to move jobs around.” As the sole point of contact to the customer, the scheduler is the one constantly calling customers to gather updates on their construction schedules, with the goal of balancing their desired delivery date with production limitations.

Currently, Southern Components tries to keep everything two weeks out, with the timeframe extending three to four weeks when things get very busy. In practice, this means the scheduler always has one eye on the farthest timeframe, with the other focused on what’s coming up over the next three days and confirming short-term delivery with each customer. The scheduler is also regularly collaborating with the production manager to maximize production capacity.

In 1985, Southern Components brought in John Houlihan to help them conduct a time study of their labor costs and throughput in order to establish metrics they could use to determine how long it took to produce a truss based on its complexity and the number and size of its individual pieces. In the 1990s, they went through the process again with one of Houlihan’s successors, Don Ullmer, to establish new metrics based on updated equipment. “While we do use board footage as a guide, those Houlihan metrics continue to be the heart of our pricing model, using number of pieces and efficiencies for each production line,” says Scott Ward, principal owner of Southern Components.

“Each year we do another time and motion study to make sure our production is in line with the metrics,” says Scott. Actual performance is tied to a percentage of the expected schedule units completed, which is then used to calculate a weekly bonus.

“We plan all of our production out based on schedule units,” says Bobby. Since 1985, Southern Components has used the Houlihan time-study method (see sidebar) to determine how much time each job will take to manufacture. Those time blocks are then distributed among the production lines to maximize throughput. “The crew leaders are responsible to communicate anything that disrupts the planned schedule, whether it’s a crew that’s falling behind or a piece of equipment that needs repair,” says Bobby.

For the most part, the schedule may have some grace built in for certain delays, but it doesn’t leave much room for squeezing in extra jobs. “We try to avoid shoe-horning jobs in as they really disrupt the whole system, but sometimes it’s unavoidable because something got broken on the jobsite or something was missed,” says Bobby.

“We don’t have a large yard to store completed truss bundles, so the scheduler also has to work closely with the yard manager to make sure we are closely matching up what is coming out of the facility with what is getting loaded on a truck,” says Bobby. He stresses that the last thing they want to do is shuffle bundles around the yard as the extra material handling increases the chance that something is damaged. “This also means that once the trusses are on the production line, the scheduler is working hard to keep customers to the schedule they put us on,” says Bobby. “We don’t want to get stuck storing the trusses ourselves.”

To make sure this all runs smoothly, the yard manager and the shipping manager work together to stage bundles and get them loaded as efficiently as possible. “I am always focused on making sure we are loading jobs far enough in advance so our drivers can have a successful delivery,” says Bobby. Since Southern Components has a typical delivery radius of within 500 miles of Shreveport (reaching from Amarillo, Texas to their west, to Kansas City, Missouri to their north, and Atlanta, Georgia to their east), that usually means loading trucks the day before a delivery.

“All the trucks now have electronic logging devices (ELDs), which means we have to manage all the federal regulations governing a driver’s hours of service and rest,” says Bobby. “The last thing you want is your driver stranded half an hour from home because they had to stop and take a mandatory eight-hour rest.” From experience, Bobby says if a truck is loaded and ready to go the night before, a driver should be able to deliver to a jobsite and get back on the same day if the round trip is 500 miles or less. If a delivery has a round trip over 600 miles, Bobby automatically assumes that driver will not be available the next day.

One of the other best practices Southern Components has implemented in recent years is taking photos of each job as it is loaded on the trailer. “The software generates a list of all the items we plan on loading on each trailer,” says Bobby. “The yard manager then uses that list to verify all the items on the truck and takes pictures of the labels on each truss and items on the truck.” Those photos provide a useful record downstream in case there are questions about when product damage may have occurred and whether an item was included in the shipment. “Every once in a while we get a call saying something is missing, and we’re able to go back to the photos and verify it was loaded and what it was loaded near to narrow their search on the jobsite,” explains Bobby.

Every Successful JIT Ends with the Driver

Once the truck pulls off the yard, the load is entirely the driver’s responsibility. “We have learned that a good pre-trip inspection and double-check prevents most of the problems on the jobsite,” says Bobby. “It’s a lot easier to fix potential problems in the yard than it is when they’re 500 miles away.”

Not only do the drivers need to inspect the truck and trailer and verify the delivery list matches the load on the trailer, they also are responsible for inspecting the condition and adequacy of the cargo tie-downs. During transit, Bobby is able to use the ELDs on each truck to track its progress and provide updates if a customer requests it. “You can also set up geo-fences at certain points that generate alerts that are sent to my phone,” says Bobby. “I usually set them up to go off once they leave the yard and once they arrive at the jobsite.”

The ELDs also provide Bobby with a lot of additional data he didn’t have access to before. “The ELD will let me know when they are speeding, when they brake hard, and how long their truck remains idle during refueling and breaks,” says Bobby. All that data helps Bobby target his follow-up training or alter existing policies or procedures. “Sometimes all it takes is a conversation pointing out why we do something a certain way and how it’s meant to make their lives easier or safer,” says Bobby. 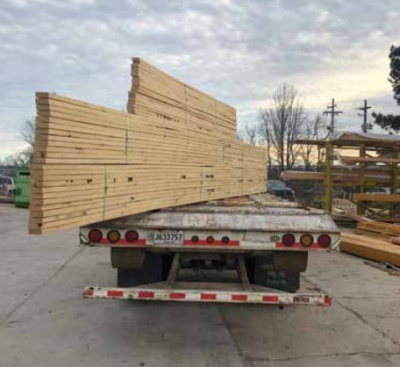 On the jobsite, the driver is asked to take photos of the load once it is off-loaded. If damage occurs during the process, the driver documents it. The driver also takes pictures to record how the truss bundles are stored and the condition of the ground on which they are stored.

“Jobsite conditions are a constant variable,” says Bobby. “I will always hear if a jobsite is difficult to deliver to or has bad conditions.” Bobby then works with the customer to negotiate a better delivery location, if possible.

A good pre-trip inspection and double-check prevents most of the problems on the jobsite. It’s a lot easier to fix potential problems in the yard than it is when they’re 500 miles away.

Southern Components has had to develop an effective and efficient JIT system due to their wide delivery radius, variety of customers (they produce both wood and cold-formed steel components for single-family and multi-family projects), and small storage yard. They have learned that their JIT success depends on centralizing responsibility with a scheduler, production manager, yard manager, and shipping manager. Having the scheduler in constant communication with the customer and, in turn, clearly communicating expectations with the other three, is a process that maximizes success for their company.

About the Author: Sean Shields is managing editor of SBC Magazine. He can be reached at editor@sbcmag.info.