When PDJ Components opened its doors for a plant tour, it was an education for everyone.

One of the first things Colleen Ketchum learned about hosting a plant tour is that last-minute flexibility is required. “We found out the night before that everyone was coming at once,” she recalled. The plant was prepared to host two separate groups of 50 building inspectors—but instead, they threw open the doors to almost 100 visitors and found a way to make things work.

“We did a quick introduction to PDJ,” Ketchum said, before they broke the tour into four groups and sent them in different directions: “one to the roof and floor truss lines, one to the panel shop, one to meet with the design team to see how the MiTek software works, and the last was the saw stations.” With 20-minute rotations, members of the Tri County Chapter of the New York State Building Officials Conference (NYSBOC) saw the entire plant in an hour and a half.

“We had the tour before their lunch,” Ketchum noted, and it came after an SBCA-led education session that took most of the morning. “We were thinking, ‘they’re just gonna want to get out of here.’” Ketchum was pleasantly surprised to find that wasn’t the case. “They were very interested and did stick around! It wasn’t just shuffling through—there were a lot of wide eyes and questions, especially when they saw some of the presses and the rollers.”

Ketchum is hoping for more of the same in the future: New York building inspectors, she explained, “need 24 hours of continuing education each year to maintain their licenses.” Between the SBCA presentation and the PDJ tour, “they checked off six hours!”

While Ketchum is keeping the lines of communication open to host additional groups of building officials in the future, she’s also hoping to reach a wider audience of builders, framers and other industry participants. “I’d really like to tap into the architect market. We’re always getting questions from architects and we’re always saying, ‘bring whoever you want through!’ But since there’s not actually a date on the calendar,” she says, the tours don’t actually happen. One lesson from this tour was to actually set a date—so PDJ is already planning for an open house at the end of May.

Built to the Letter

Of course, the roller presses weren’t the only things in the plant that left the tour group wide-eyed. They also learned a lot about components in general and PDJ specifically.

“We went through some of the points of Framing the American Dream: the cost savings, waste reduction and time savings of building components,” Ketchum explained. SBCA’s ongoing initiatives to show side-by-side comparisons of stick and component framing were covered throughout the day. “I heard some really great, positive feedback about SBCA and the tour,” said Ketchum.

“They were very interested in the plates: plate sizes, plate placement.” They were intrigued to learn how work done in the design office translated to work carried out on the manufacturing floor. The more they learned, Ketchum noticed, the more the inspectors seemed to agree that component framing had advantages over stick framing.

“They realized that you know what you’re getting when you’re getting a structural component,” Ketchum said. They all had stories to share about visiting jobsites, seeing a wide variety of framing practices, and having a difficult time knowing whether what they saw was correct. If not truly a revelation, it was a good reminder for the group that, with trusses, they didn’t need to check for specific fasteners and nailing patterns—they could look at the plates and rest assured that load path analysis and engineering had been done as part of the truss design. With large plates clearly indicating greater load transfer through the truss, inspectors have an easier time tracking load paths in buildings that are framed with components as opposed to other methods.

“After their tour through the plant, they realized that the trusses are really built to the letter—to the T—for the exact job they’re supposed to do,” said Ketchum. She’s hoping inspectors will pass the message along to local framers and builders that structural components are the way to go, and that PDJ is the place to get them.

“We went over some of the basics about why they might want to think about PDJ,” Ketchum said. For starters, PDJ is a long-standing local business. Although Ketchum just purchased it this year (along with her husband, Taft, who represents the SBCA-NY chapter on the SBCA board and participates in the association’s emerging leaders, IT and safety committees), the business has grown for years as an offshoot of the Chester Lumber Company. “Shortly after they started building components at the lumber yard,” Ketchum explains, “they incorporated PDJ Components. So Taft is the fourth generation building components here on the property. We’ve been here, family owned and operated, for a long time.”

Throughout their history in Chester, New York, PDJ—just like every component manufacturing plant—has relied on a dedicated, hard-working production crew to turn out a high-quality product. And that group, too, found new perspective during the tour.

“Honestly, we have one or two who might have grumbled a little bit,” Ketchum admitted, “but overall they were all so excited. It shakes things up!” Having a tour group peeking over their shoulders was a new experience for most of the PDJ staff, but it gave them a new understanding of their work. “This gave them a chance to see how interesting what they do every day is to the building inspectors who see this stuff out in the field all the time,” said Ketchum.

For example, “we wanted to focus on the quality of the product,” Ketchum explained, “so we went through our QC program and how we’re third-party inspected as well.” The NYSBOC group saw the whole process: from the technicians creating designs in the office to the ALS saw that uses those designs to cut the lumber with minimal waste, (“That’s always fun to see,” noted Ketchum), and from the double-, triple- and quadruple-checking of the lumber grades throughout production to the stacking, loading and off-loading that gets components from the plant to the jobsite with minimal breakage (“We also wanted to let the building inspectors know how we safely deliver our components,” Ketchum said).

The NYSBOC group was impressed, Ketchum reported. “They really had positive feedback. They had no idea about how some of these things were built.” That was enlightening for the production crews. “The guys, you could tell, they were chomping at the bit because they’re not used to working so slowly! They’re used to working top speed,” said Ketchum, and having a tour group asking questions “changes things around.”

Still, she said, “it was a fun day. Doing this now and then gives them a slightly different perspective on what they do. If you’re doing the same thing every day, it may get a little bit monotonous. It might sometimes feel like drudgery, especially if you’re picking or running a saw on the floor truss line.” Seeing the work through someone else’s eyes changes that. “They had a chance to see people get really excited about what they were doing and really be impressed with what they were doing.” That’s a perspective that Ketchum is ready for the rest of the building industry to share.

about the author: Before joining the SBC Magazine team in 2015, Dale Erlandson wrote for a variety of publications in several different careers, including non-profit communications, teaching and technical writing. 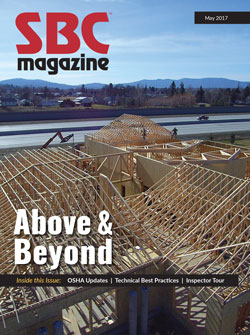