Get a Leg Up on Leg-Down Trusses

Get a Leg Up on Leg-Down Trusses

Leg-down trusses require special design considerations that typical heel-bearing trusses do not, so it is important for truss and building designers to pay close attention to a few key elements. 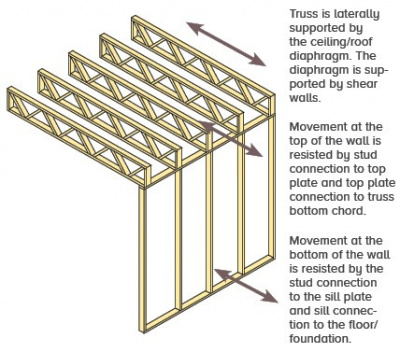 A leg-down or leg-thru to bearing condition occurs when the web of a truss extends to a bearing surface that is below the bottom chord plane of the truss. This condition occurs most often when the truss designer is asked to provide trusses with varying ceiling heights while maintaining the same bearing elevation. Proprietary truss design software typically allows a leg-down condition to be modeled; however, there are a few design considerations that the software may not handle automatically. Understanding these limitations will ensure that these types of trusses are designed correctly. 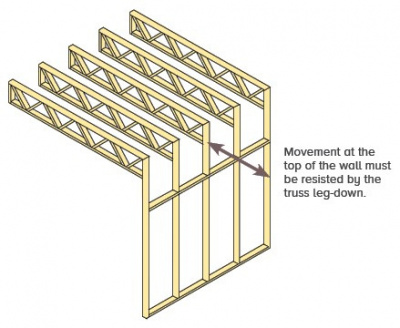 With a leg-down application, the top of the wall is below the ceiling and roof diaphragm and the vertical web of the truss must be designed to laterally support the wall if no other lateral support exists (see figure 2). 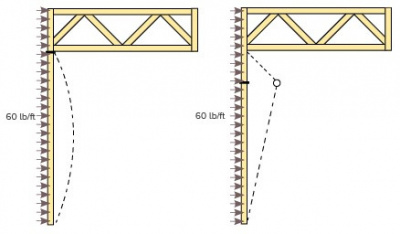 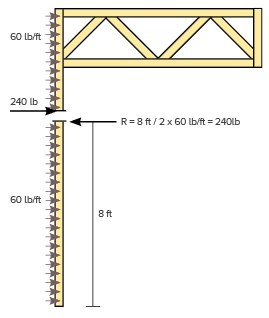 If the wall is an interior wall, building codes require the wall be able to resist a minimum lateral load applied to the face of the wall. For example, IBC 2015 section 1607.14 requires 5 psf for interior walls that exceed 6 feet in height. Using the same example as above for a leg-down truss occurring at interior walls should therefore be designed to resist the applicable portion of this load as follows:

It is recommended that the designer clarify additional leg-down load assumptions by adding a note to the truss design drawing. For example, “A 240-lb wind load has been applied to the bottom of the leg-down to account for lateral support of the wall below.”

In other words, the leg-down should behave as a beam with a cantilever extension, with a peak moment occurring at the bottom chord similar to the image below. The bearing at the opposite end of the truss will need to be modeled as a pin or the truss model has inadequate lateral restraint and will be unstable. If both ends of the truss have leg-downs, the truss needs to be analyzed twice with the bearing conditions alternated to design each leg-down properly while keeping the truss stable. 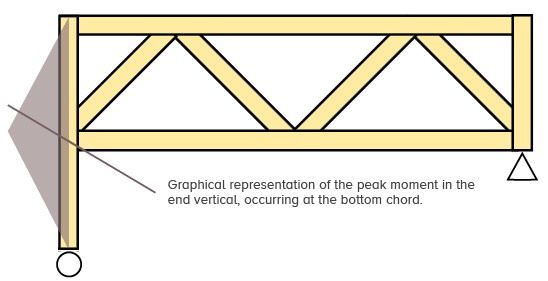 Finally, the connection of the leg-down to the top of the wall should be designed to transfer the horizontal wall reaction in addition to any uplift from the truss that occurs.

About the Author: Eric Helmueller, P.E., is a structural engineer who has spent years providing technical support and quality assurance for structural analysis and design software, with contributions by Keith Hershey and Jim Vogt, P.E.