In May, SBCA was contacted by a component manufacturer (CM) member who recently had over $6,000 fraudulently stolen. Someone familiar with the company’s vendors and accounts payable schedule set up a shell company with the same name as one of their common vendors, but changed the mailing address. 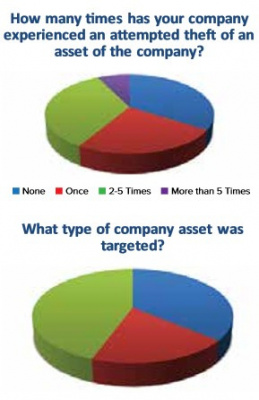 This experience prompted us to explore how pervasive attempts at theft are of a CM’s assests and financial resources. It also caused us to wonder what best practices CMs could have in place to monitor for these types of theft attempts. A subsequent survey on this topic yielded some interesting results.

Of the 41 respondents, 14 indicated their company had not experienced an attempted theft of an asset of the company in some manner in the past five years. Of the rest who had, ten said it had only happened once, three said it had happened more than five times, and the remaining 14 were between that range.

Looking specifically at what assets had been targeted for those 27 CMs, 13 said someone had attempted to steal money from the company, seven indicated there was an attempt to steal intellectual property (i.e., customer lists, sales proposals, project design, unique ideas, etc.), and 16 said there was an attempt to steal physical property (i.e., lumber, plates, vehicles, hardware, etc.). Of the 27, three said they were aware of an attempt by an employee to defraud a federal government program (i.e., workers comp, unemployment, etc.).

What is probably most telling from the survey results is 45 percent of these attempts were perpetrated by people employed by the company at the time of the crime. Another 33 percent were former employees. This suggests there is value in exploring best practices for mitigating fraud and theft in the workplace.We will cover this topic more in the coming months. If you didn’t participate in the survey but have an experience you’d be willing to share so we can identify mitigation strategies for it, please let us know at editor@sbcmag.info.