This common problem doesn’t have a common response

According to an online survey of component manufacturers (CMs), 96 percent of respondents indicated they have had a plumber damage or modify their products after installation. Of those that had their product damaged, 97 percent indicated their customer asked them for a repair. That overwhelming response indicates this is a common problem. What is interesting is the poll results suggest that CMs do not have a common response to the request for a repair. 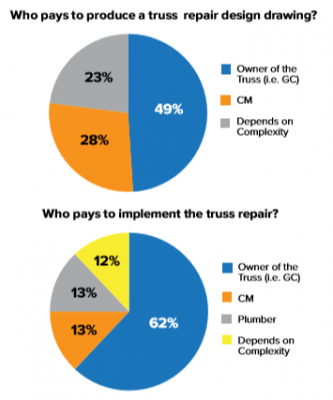 Regardless of the actual damage caused by a plumber, a CM’s response to a customer’s repair request varies. In 54 percent of the cases, respondents indicated the owner of the trusses (i.e., the builder, GC, framer, etc.) contractually takes responsibility for the repair and manages the response. In 25 percent of the cases, the CM either creates the repair drawing in house or they work with an outside entity like their design software provider or an engineering firm. Another 13 percent of respondents indicated they immediately send someone out to fix it. The remaining eight percent immediately farm the request out to a truss repair service.

Next month we’ll look at what respondents thought was the primary reason plumbers are damaging installed components and what they are doing to try to address the problem.