“Gender diversity benefits a manufacturing organization through improved ability to innovate, higher return on equity, and increased profitability.” A 2017 study by the Manufacturing Institute, APICS, and Deloitte about women in manufacturing goes on to state: “When employees believe that their organization is committed to inclusion, they report better business performance in terms of their ability to innovate. Organizations can also unleash the full potential of their female workforces by creating a culture where unique strengths thrive.” 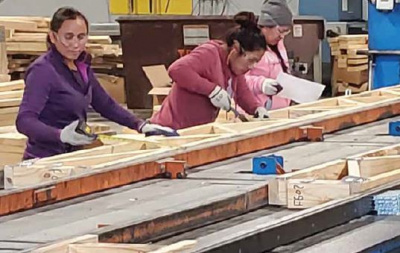 The component manufacturers (CMs) who have participated in the recent conversation on the topic of hiring women in the plant support the spirit of these findings as they share the benefits they are experiencing from having what many call a more “balanced workforce.” One such manufacturer is Wilson Lumber in Madison, Alabama. As a result of hiring more female production employees, the Wilson team has retooled its production onboarding process to the benefit of all, including a positive impact to the company’s bottom line.

When Jackie Crutcher started at Wilson in the fall of 2018, he said there were no women working in the plant. As Jackie moved into his role as Wilson’s division manager, he suggested they target more female applicants “to pick up the slack on floor truss production.” Jackie says that his employer prior to Wilson had more than 20 women in the plant who were very efficient and reliable. “The female floor crews I had in my last position could have worked circles around the guys,” he remembers.

The timing was right for Wilson, too. With local unemployment rates under three percent at that time, the temp agencies the company used were approaching them with female applicants ready to work. “We had to add a women’s restroom in the production area to be prepared to have female employees in the plant,” Jackie explains, but once the necessary facilities updates were completed Wilson hired their first female truss assemblers in early 2019, and it grew from there. “Currently, our production workforce in the Madison plant is about 30 percent female across three shifts,” says Jackie.

One common observation among CMs who onboard women in production roles is that women ask more questions up front in the training process rather than jumping into the work and learning along the way. “Guys tend to learn as they go, while the ladies want to be more sure of themselves first so they don’t make mistakes,” says Jackie. With men, that usually means less of a hit to overall production numbers but more initial mistakes. On the other hand, women typically have higher initial quality but can take a bit longer to hit desired production levels. 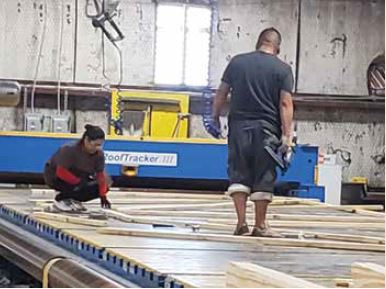 It wasn’t until they had the opportunity to train more women that this basic difference in learning style became apparent to Wilson’s management team. In keeping with the study findings cited above, however, they embraced it as an opportunity to rework their onboarding procedures, and the training table was born.

“It’s basically a section of a truss table that is micro-managed,” explains Jackie. “The approach is one of shadow training through a buddy system, usually one trainer to one new hire, sometimes two. The supervisor takes a large initial role and then turns it over to the trainer buddy.”

Initially, the buddy builds the trusses while the new hire watches. Then the new hire helps the buddy with the process by back plating, etc. “It’s a matter of repetition – seeing it done and then doing it,” says Jackie. “These training teams start out with smaller trusses, so if a mistake is made it’s not a huge deal to take it apart and redo it. They start small and grow from there.” 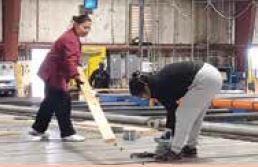 Jackie goes on to explain that the training teams spend about a week on the training table and that their “numbers do count toward production, but the expectation is factored in based on percentage of new hires.” After that initial week, “we check in to see what they like and don’t like,” says Jackie. Each new hire is assessed on an individual basis to see where he or she moves from there. “We always check in to make sure they are in the right seat before getting too far,” he says.

Questions are encouraged throughout the entire process, so Jackie makes it clear that having well-trained trainers is key. “I firmly believe that you need to have the right people in place to be patient and answer the questions – not everyone is cut out to be a trainer,” he says. “But if you find the right people who are ‘teachers at heart’ your onboarding process will be much more successful no matter who you are training.”

Wilson’s new approach has been in place for about six months and Jackie says production numbers are looking good. More importantly, he reports, employee retention rates are “higher across the board.” 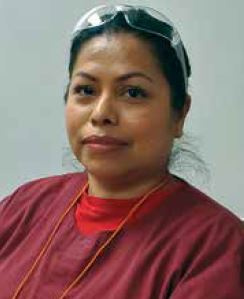 Jasmine has been building trusses for Wilson Lumber since spring of 2019 when she learned about the open position through a friend who also works there. She says that “at first she was overwhelmed by the numbers and measurements on the shop drawing” but she really likes working in a group and has “no problem with the physicality of the job.”

When asked what she likes about working in the industry, Jasmine says she “likes building trusses because of the precision required.” She admits that her work may not be as fast as some of the guys but brags that her quality is better.

Jasmine aspires to be a team lead for Wilson one day and is willing to work hard to obtain the experience she understands it will take to get there.

This article continues the conversation on the topic of women working in the component manufacturing industry. If the observations or practices of these CMs raise questions in your mind, please reach out to us at editor@sbcmag.info. We’d love to incorporate your thoughts and observations in future issues.