“Turnkey framing subcontractors are finding themselves in a bind as the cost of raw materials increase, or become scarce, but their contracts with the general contractor don’t give them much of an ability to escalate their payment terms in an equitable way,” says Kent Pagel, legal counsel for SBCA and the National Framers Council (NFC). 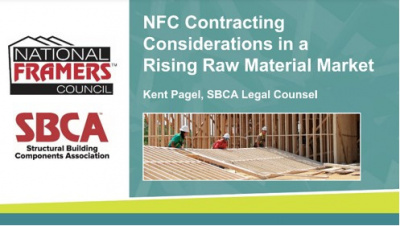 This observation was made during his webinar, “NFC Contracting Considerations in a Rising Raw Material Market,” with over 150 registered framing contractors. Over the course of an hour, Kent outlined how framing contractors who provide labor and materials need to take a fresh look at their contracts. “Originally, GCs wanted framers to simply take on the risk of managing the material,” says Kent. “But today, they are also transferring the risk associated with material pricing.”  As a consequence, Kent argues turnkey framers really need to look at themselves as a true middleman, similar to the role of the GC themselves.

“Every turnkey framer needs to be asking themselves whether they have the contractual ability to raise their price if the cost of materials increases significantly.  Further, can they terminate the contract without liability if they can’t afford to perform the work at the increased cost,” says Kent. 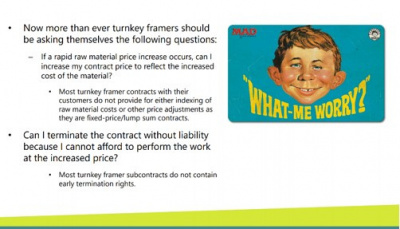 During the webinar, Kent reviewed a few different contract provision options framing contractors have at their disposal to address material scarcity and escalating material costs.  The most common provision is “force majeure,” which can provide some protections.  Kent stressed that every framing contractor should take this opportunity to review the force majeure provisions in all future contracts.

Kent also addressed the approach of “impracticability.”  “Impossibility or impracticability can excuse performance where a party can demonstrate that performance may be so difficult and expensive that it becomes impossible or impracticable, though technically possible,” says Kent.  Unfortunately, the ongoing nature of the volatile lumber market may make this argument more difficult and this defense does not necessarily come into play just because current circumstances make performance more difficult or costly. Kent adds, “it may be difficult to prove in today’s market that you could not have been aware that material costs would rise or be hard to find.”

A preferred alternative, Kent suggests, is to seek contract provisions that allow the turnkey framer to pass along reasonable cost increases (and decreases) to the GC. “It makes practical sense for the GC to provide some relief to an existing framing subcontractor rather than face a default that would precipitate needing to re-procure a new framing contractor,” says Kent.

Instead, framing contractors and GCs should be motivated to seek contract terms that are not based on a fixed price, but rather the price is either tied to a material cost index (ex. Random Lengths) or includes an escalation/de-escalation clause tied to a dollar or percentage change in a material’s cost tied to the date of the original bid.

In conclusion, Kent provided sample contract language turnkey framers should consider regarding force majeure, period of acceptance and lumber escalation provisions, which can be found at the end of Kent’s presentation slides.

Kent will be hosting a follow up webinar on this topic for NFC framer members on Tuesday, April 6, at 2:00pm Central. Look for more information shortly, but if you aren’t an NFC member and would like to participate in the webinar, become an NFC member today.