Last fall’s M&A feeding frenzy made more than a few independents nervous. First there was the merger of Builders FirstSource and BMC, followed by the acquisition of T.W. Perry. Then Bain Capital bought US LBM, which promptly snapped up five independent dealers and a component plant. 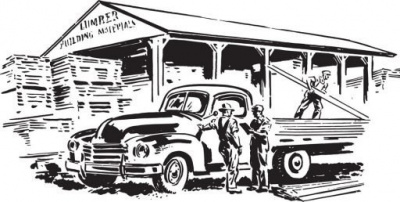 A lot of people worry that at this rate, some poor independent will soon be the last man standing. They can relax. There are over 5,000 lumberyard firms in the U.S. No more than 5% of them are viable acquisition candidates.

Not that the rest aren’t good operators. They’re just too small for Wall Street. The acquisition costs are too high to justify the revenue gained when the target is below $40 million or thereabouts, say M&A consultants.

Yes, but if all the big independents get acquired, won’t the chains be in position to outmuscle smaller independents? If so, it would have happened long ago.

The LBM channel has had megaplayers since Wickes and Lowe’s in the 1960s. The market share held by the four largest chains has never topped 10%. From the 1970s to the Great Recession, only one of the eight leading players is still in business.

That doesn’t prevent independents from worrying, of course. As far back as the 1890s, a reporter named Met Saley was writing about LBM dealers’ consolidation fears in the industry’s only trade journal, American Lumberman. 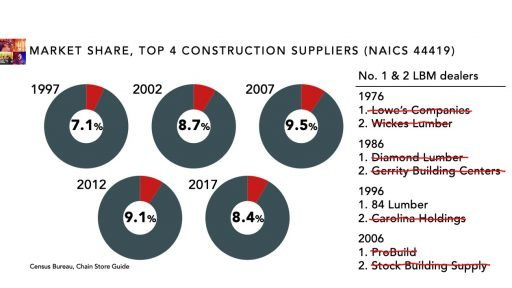 Saley didn’t buy it, either. “The up-to-date local lumberman who knows by heart the people of his section does not stand in fear of such competition as is put up by the average man in charge of a line yard. Go where you may and ten to one it is not the line yard that is doing more than its share of business.”

Why? Because the rules of the game haven’t changed. Local variations in building codes, material preferences, and construction methods prevent megaplayers from leveraging cost synergies and economies of scale.

That keeps the playing field level. When the rules are different everywhere you go, everyone is forced to compete like an independent: You’ll succeed where your local operators are effective and fail where they aren’t.

The difference is that ineffective independents go out of business. An ineffective branch in a chain operation can hang on as long as the company allows it—and as long as it does, it’ll be a drag on the entire organization.

So if you want to worry, the thing to worry about is whether the rules will change. They haven’t for at least 130 years, but that’s no guarantee they never will.

Click here to read the rest of the article.