During the first ten months of 2020, US importation of overseas softwood lumber was 39% higher than during the same period in 2019. A report by Wood Prices International says that by year-end, 2020’s import volume will likely be close to 4.7 million cubic meters, the highest level in 15 years.

The importance of overseas lumber supply has increased in recent years as the supply from Canada has dwindled. Despite record-high lumber prices in the US in 2020, Canadian lumber shipments to its southern neighbor have fallen for the fourth consecutive year. A reduction in the Annual Allowable Cut (AAC) in the province of British Columbia has reduced production volumes in that region by over a third in just five years. 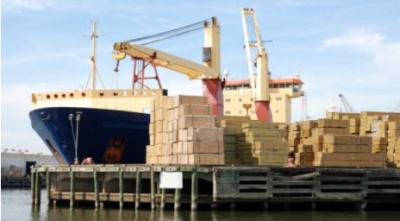 The United States’ favorable market conditions have historically attracted lumber from overseas, with the all-time high being close to seven million cubic meters in 2005. Europe has been the dominant provider of lumber from outside North America for much of the past two decades, a position that remained true during 2020.

Although overseas volumes have not reached the same levels in 2020 as in 2005, Europe’s share of the total imports reached a record high of 13% in 2020 (read more in the WRQ Trade Snapshots). The current market share is substantially higher than the 20 year average of only seven percent.

A majority of the overseas imports in 2020 have originated from Europe. Sawmills from this region have steadily expanded their sales to the US over the past three years. In 2020, they will probably ship close to 3.3 million, cubic meters up from 2.1 million cubic meters in the previous year. Germany is, by far, the largest European supplier, followed by Sweden and Austria. Although these three countries account for a majority of the volume from the continent, most European exporting countries have a presence in the US market. It has been somewhat surprising that Russia and Finland, the world’s largest and fourth-largest lumber-exporting countries, have been conspicuously “missing-in-action,” together accounting for less than four percent of overseas lumber supply to the US in 2020.

With the prospects of continued reductions in timber harvests in Western Canada, lumber produced in British Columbia will likely play a diminishing role in the US lumber market in the future. Consequently, the US softwood lumber demand will increasingly be met by expanded supply from the US South, Eastern Canada, and overseas.