“It’s impossible to comply with their regulations. They essentially pushed us out of the market,” says Stacie Shifflett, owner of Agility Construction, Inc. in Washington, DC. On October 7, 2019, Agility publicly announced that the company had stopped submitting bids for future work, and would begin winding down its operations while still fully committed to its existing contractual obligations.

Agility was first started to meet a need in the marketplace for a qualified business that could support large contracts as a Certified Business Enterprise. CBE certified companies receive preferred procurement and contracting opportunities but must meet certain hiring requirements.

“Every time we think we got it working, it was like pushing a rock up a hill and they would change the regulations and a bigger rock would get in the way,” she says.

The good news is that employees at Agility have already begun to transition into similar roles at Ace Carpentry, a framing company in Manassas, Virginia, owned and operated by Kenny Shifflett.

“I was looking for an exit strategy to get out of the business and I wanted to sustain employment and success for our employees,” Stacie says. “With assurances that our people would continue to have jobs, it was a good decision in the end.”

Kenny says this transition worked out well for Ace Carpentry, too, “because Agility has talented and valuable people that Ace can use.” 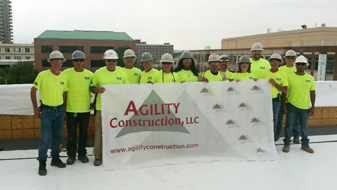 “Our industry is starving for additional people to work,” Kenny says. “Being able to migrate qualified and experienced accounting, estimating, and production staff who can step into our company and don’t have to learn the trades is a tremendous benefit.”

“Although there is one less framer on paper for a GC to consider or other framers to compete against, this is an exciting opportunity to build upon Ace’s existing foundation,” Chris says. “I am looking forward to building new relationships and making new friends, continuing to learn and grow both personally and as a company, and operating within a larger company.”

Kenny, who at 63-years-old is looking to not have to be in the office every day, says he will still support the financial and public relations parts of the company. Overall, both Stacie and Kenny say they continue to hear positive feedback from their industry peers about the transition.