Canada's building codes are revised every five years by the National Research Council, and the next update will be released in 2020. The new code will address climate change with a focus on resiliency, including energy efficiency and new requirements to ensure buildings stay cool during hotter heat waves. The new model code will be finished by the end of the year. As a model building code, it is not enforceable until adopted by a province or territory.

Here are summaries of four of the most significant proposed changes that affect the insulation industry:

1. The code will require homeowners to do a better job insulating their homes, which will save homeowners money and reduce the home's environmental impact.

The new code will set out minimum energy-efficiency requirements, and one way a homeowner can meet those is installing dense-packed cellulose — basically shredded newspapers covered in a fire-retardant coating — in walls and covering with a sealed membrane.

The addition of spray foam should ensure the house is airtight.

2. Basements will now have to be insulated. One of the best ways to achieve this is through inter-connecting foam, or ICFs. The new code says that this concrete has to be more durable and more waterproof. 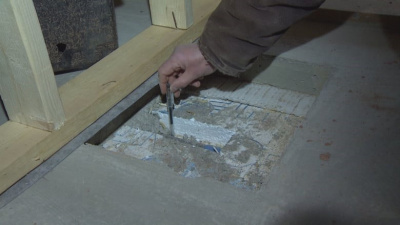 3. The National Building Code will also require new homes being built to have insulation not only on walls but also under the concrete in the basement.

In the photo at right, this homeowner installed four inches of foam under the basement floor. That foam is continuous, going to the walls on each side of the house and then wraps around the house — a new requirement under the updated National Building Code.

4. The national code will also require roofs to be much stronger to deal with increasingly intense storms. This will mean home-builders will pay more up front, but those costs will be offset by long-term savings. It also means ensuring that roofs have stronger materials and more insulation. That insulation acts as a glue to ensure roofs can withstand stronger winds.