Is Housing Recovering from COVID-19? 5 Things to Watch

These are dark times. But even in dark times, we are preternaturally prepared to see the end of the tunnel.

If we are diligent, we will be able to identify the return of hope and light coming back into the American economy. While no one could truly know when we’ll see the end of the coronavirus, we can at least know what signs to look for that the housing market is on the rebound.

With that, here is a guide to the five indicators that the period of AD (After Disease) is abating, and the era of AB (America is Back) is emerging.

The first, and in fact, a prerequisite event that will indicate that the economy will come out of this tunnel is the turning of the number of new cases of infection from positive to flat or negative.

In the Wuhan Province, with the strictest lockdown measures ever enforced, it took two months for the trajectory of new cases to level off. Furthermore, there was a span of three months from the first cases in December until March 19 when it was reported* that there were no new local infections. (*Questionable data noted)

If we consider the China trajectory to be the best-case scenario (Noting questionable data) and apply those timelines to the U.S., then we should see the path in new cases flatten by mid to late April for states that first issued stay-at-home orders. These states should have fewer new cases by mid-May.

I think this seemingly ambitious timeline is possible because we are growing our testing capacity, and the two most populous states issue stay-at-home orders in March, and others have since followed.

It is from this data that I have based my virus turnaround thesis, which is that by May 18 or sooner, we will see a flattening of the new infection curve, and by September 1, we will be at a much higher capacity to fight this virus.

The second and also prerequisite indicator that the economy will be getting back on track is the lifting of stay-at-home orders.

Remember that the economic data from January to February was robust. Job growth in those two months was running at a combined average of 244,500 per month, well above my own 2020 forecast range. Retail sales were growing year over year, and even a few of the regional manufacturing data lines were trending positive.

As I have mentioned previously, housing data was on fire with cycle highs in purchase applications, new home sales and existing home sales. Even housing starts showed almost 40% growth year over year in the last report. In the days of BC (Before Coronavirus), the economy wasn’t going into recession in 2020.

However, the stay-at-home orders that most of the country is now following have basically shut off the economy. Turning that massive machine back on once the protocols are removed will take time, so be patient. We have sustained a lot of economic damage in a matter of weeks. Catastrophic loss can be nearly instantaneous, while rebuilding is a slow and steady process.

Dramatic changes in the bond markets were the harbingers of our oncoming economic decline and will be the beacons for our recovery.

In many ways, we are experiencing an artificially induced recession, so we were unable to rely on the usual early indications to predict the economic crash. In 2006, we had many data lines that were warning us about the economy. The effect of this virus and lockdown protocols on our economy is nothing short of an act of war hitting the country quickly.

On January 20, the first positive test for the coronavirus was reported in the U.S.  A month later, the 10-year yield was 1.56%. In all my yearly prediction articles since the end of 2014, I always talked about how the 10-year yield should be in the range between 1.6% -3%.

The bond markets correctly and with great speed reflected the oncoming crash of the economy.

But we all knew what was coming on that day, massive layoffs, as it was also the first day the U.S. government banned gatherings of more than 50 people.

Before the 10-year yield broke under 1%, Bankrate.com published my forecast for where I believe recession yields would be: in the range of -0.21% to 0.62% on the 10-year yield. That following Monday, on March 9, bond yields dropped to as low as 0.32%.

We had a massive sell-off in bonds, not because the economy was getting better but because some traders took profits, and others had to liquidate assets, which forced yields back to 1.25%.

The fact that the 10-year yield is at 0.73% while I am writing this tells me that the markets believe that Q3 and Q4 will be better than Q2, which is using the lowest bar in recent history to work from.

Once you get to these levels, know that it’s a good thing.

When credit stress and jobless claims start to fall, you can believe we are on the road to recovery.

Before COVID-19, jobless claims and the Financial Stress Indices were basically at all-time lows. (As seen below.) 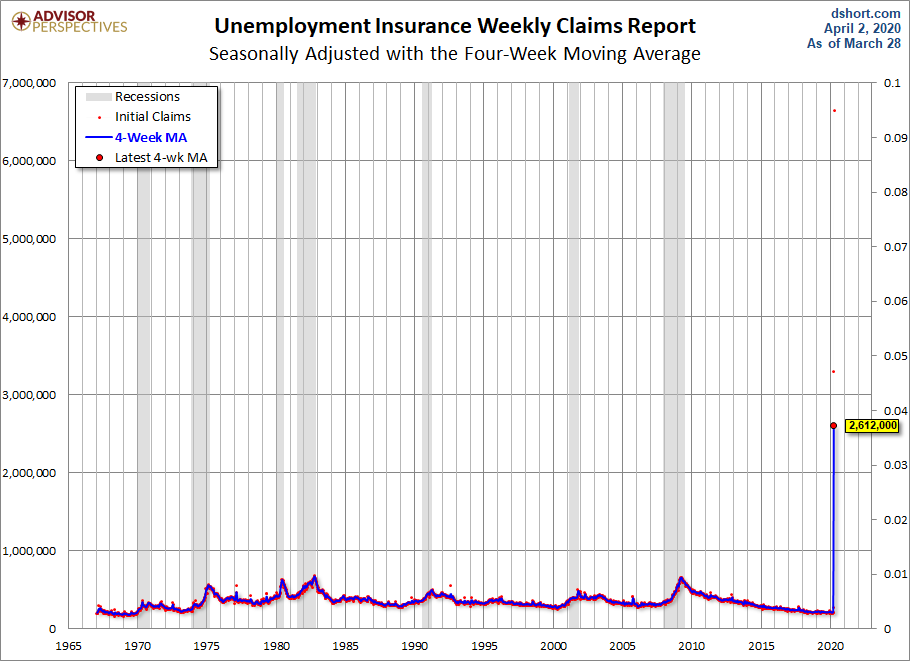 In the last expansion, declines in credit stress as measured by the St. Louis Fed Financial Stress Index (seen below) and in weekly jobless claims were discounted as indicators of an improving economy.

To track economic recovery, these weekly data lines are going to be even more important to follow than monthly data like leading economic indicators and housing starts.

This is the opposite of a so-called “normal recession,” when monthly indicators would be the ones to watch because they are more indicative of trends and less subject to statistical vagaries.

In this recession, however, the monthly data is too slow to capture the day to day shifts in the economy. A good example is that the recent jobs number showed a loss of 701,000 jobs where the next report could show a report of over 15,000,000 jobs being lost.

5. Data from the hardest-hit sectors starts to trend upward

Some of the hardest-hit business sectors will show recovery first because the declines have been so horrific.

The restaurant industry, airlines, hotels, movie tickets, rideshares and gasoline purchases are some areas to watch. As more people walk the earth, go to work and get back to normal, these beaten-down industries will be some of the first to pick up.

For housing, purchase applications –– which showed double-digit year-over-year growth all the way to March 18 –– had back-to-back negative, year-over-year prints of 11% and 24% for the last two weeks. We are likely to see much deeper year-over-year declines in the coming weeks as more states follow stay-at-home protocols.

You will see a reversal of these negative year-over-year trends as one of the first indicators for housing.

Don’t be surprised if the government disaster aid goes above $10 trillion, with more money for people, states and small businesses when it’s all said and done.

I believe the months of April and May are going to tell an epic story of America’s start in defeating this virus.  If we do this right and document the cause and effect of our efforts, future generations will be able to look to this period in time for how to handle a global pandemic.

My faith in America winning has never let me down because I always believe in my people and country. I can tell you now, this virus isn’t changing my view on that. Before that reality is more common for a lot of Americans, bond yields will have headed higher while jobless claims and the St. Louis Financial Stress Index have already gone lower. Let’s all be here to see it.

Until then, stay separate and safe, my friends, and keep your eyes open for those small rays of hope.