Lee Noland has a degree in finance and sold insurance for five years after college. He says he quickly became ready for a new challenge: “There were so many days where the hours would go by and I was just staring at the clock. I have to stay busy.” 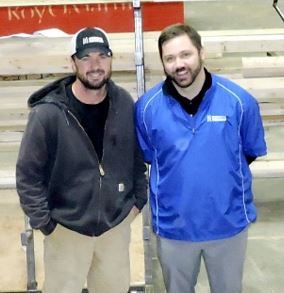 Geris Kraus is the son of a framer and grandson of a contractor. He went out to North Dakota when housing slowed down in 2008 to build multi-family units with the partners he met while working for his dad. “I liked the repetition and production-style work and saw an opportunity to get good at it and fill a niche,” he says.

After meeting through a mutual friend in 2008, Lee and Geris talked about general business concepts for years, only to later combine their knowledge and desire for fast-paced work to form MinDak Commercial Construction in 2011. The company started with six people, and has grown to a company of 45 employees and another 45 subcontractors and independent contracts. Based in Lonsdale, Minnesota, the company focuses mainly on multi-family projects in the greater Minneapolis/St. Paul metro area, with 75 employees devoted to framing projects and 15 folks operating their wood wall panel shop.

While sometimes difficult, it’s the challenges of running a business in this industry that both Lee and Geris like to face head-on and is one of the reasons they are active in the National Framers Council (NFC). “You can talk about your problems with other business owners [in your local area], but to get specific about framing challenges with somebody who really understands them is fun, and very useful,” Lee says. “You get useful conversations that will trigger an idea or push us in a particular direction to help us solve some problems.”

Lee serves as the co-chair of NFC’s Best Practices Committee, which is currently developing best practices and standards for framers. The idea was born out of the 2018 Framers Summit where many of the attendees realized they were all having similar problems across the country.

“It’s a large mission, but we so often have disagreements on the jobsite with general contractors,” he says. “If we come together as a group of independent framers and work together for a common goal of what our best practices are nationwide, we can definitively say how things should be done.” 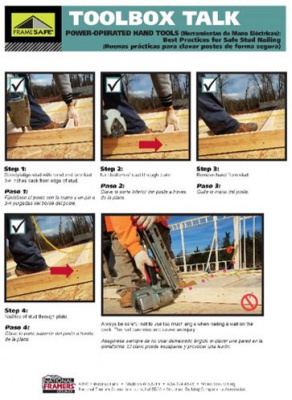 MinDak’s use of NFC’s FrameSAFE program is another tangible way they are tying into standard best practices for framers. The company has been using the program’s growing library of Toolbox Talks for the past four years. Their approach has been to choose 52 different Toolbox Talks from the FrameSAFE online dashboard and keep them in a binder at each jobsite. OSHA requires weekly safety training as part of a compliant jobsite safety program, so every Tuesday morning over donuts and cookies, the crews read and discuss a different Toolbox Talk and then sign it to record that each employee has received training. MinDak’s foremen also meet monthly to discuss the issues and pain points they are having on jobsites that they feel they can put resources toward to better train their crews.

Lee and Geris have taken the time to customize their approach to safety to address concerns specific to their crews. “They want to produce as much work as possible,” Lee says. “The faster they can do it and see their progress, the more fun it is. Unfortunately, speed, at times, contradicts safety.”

After realizing that employees would stop following some rules in order to work more quickly once the supervisor left the jobsite, they created a new program called the “Tail Light Campaign.” Lee, Geris, and their HR leaders randomly stop by projects to do an inspection every week. The results of the audit are then factored into the employees’ reviews and potential raises.

“The most important thing is that we are physically on site with one thing on our mind – safety – and to make sure everyone is following the rules,” Lee says.

The company also conducts a site-specific safety meeting to discuss the unique hazards that exist on each jobsite before every project begins. “Some buildings are getting very tall; we need to know what equipment is correct to use,” Geris says.

In addition to their internal program, the company participates in OSHA’s National Stand-Down to Prevent Falls and finds other opportunities to talk about best safety practices.

Keeping their framers safe is Lee and Geris’ top priority, which is why they enjoy looking for new and different ways to put together their framing teams for each jobsite. Both find this creative part of the job to be simultaneously challenging and enjoyable, which continually fosters their appreciation for the framing industry.