Over the last few years a number of businesses have sprung up along the Eastside Highway north of Stevensville. One of the latest is a truss manufacturing business called Quality Truss & Design. Owners David Kauffman and Joe Stutzman produce trusses for both residential and commercial construction, some spanning up to 100 feet. 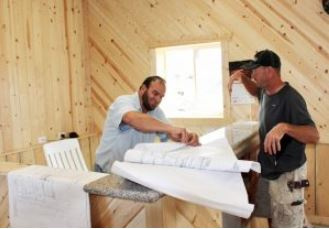 The large, open-bayed manufacturing shop holds some intricate, two-bladed, computer controlled saws for cutting all the boards at the required angles. Once the boards have been cut to order they are placed on a giant “jigger” where they fit between large steel plugs that hold them in the proper shape. It is a bit like putting a jigsaw puzzle together on a giant steel frame.

Once the boards are all laid out in the proper design, steel cleated plates are laid over all the joints where two or three boards meet and lightly tapped in place. Then a heavy drum rolls over the entire truss crushing the steel plates into place. Cleats are then hammered into the other side as well. When the process is complete, the truss is pushed out of the building through a slot in the back wall onto another bed of rollers.

Out on the back roller the trusses get stacked and stood upright. A set of them is bound together with steel ribbons and lifted by tractor and hauled away for delivery.

Kauffman, who has recently moved to the area from Iowa, said that he had a truss business back there but when he left he didn’t think he would be doing it again.

“But when I got here, I could see there was a real need,” he said. 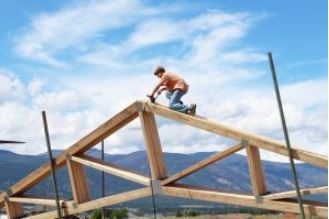 Justin Kauffman, the owner’s son, ties a metal band around a truss in preparation for delivery. Michael Howell photo.

The ground was broken on the project last August, but the frost hit before they could get the building up. They dug holes through the frost in December and got the building up in January. A lot of concrete had to be poured and a long spring pushed that off until April. So, they weren’t fully up and running until May of this year.

“Since then we have not had a day off,” said Kauffman.

Kauffman said it was a good time right now in the valley to be getting started in the business, as there is a lot of building going on.

Located at 4434 Eastside Highway, north of Stevensville, the company can be reached by calling David Kauffman at 406-777-9863 or Joe Stutzman at 406-777-9851. Or email qualitytruss@sle.email or visit the website: qtdtruss.com.