How Dependent Are You on Your Lumber Supplier?

Editor’s Note: The following article is part of SBCA’s Construction Industry Workflow Initiative, which is exploring how the construction industry currently functions and the role component manufacturers play within that structure. Your feedback is encouraged to help us complete this project, email workflow@sbcindustry.com to provide your input.

This article provides general background on lumber and the lumber supply chain. Given there are no direct substitutes for lumber that a component manufacturer can use in their manufacturing operation and maintain the same lever of truss production, CMs find themselves beholden to lumber suppliers. Yet over the past six decades, metal-plate connected dimensional lumber has become the best economic solution for creating efficient, engineered structural framing.

Component manufacturers (CMs) rely on a variety of suppliers to design and manufacture their products, including roof trusses, wall panels, and floor trusses. Among these suppliers are lumber producers who transform harvested timber into dimension lumber through milling, drying and planning. They then grade it and band it into units for sale.

CMs buy more than seven billion board feet of lumber annually, and typically purchase dimensional lumber ranging in nominal size from 2x3 to 2x12 in a variety of lengths on a commodity market, making the relationship between lumber producers and CMs largely transactional in nature. While lumber is described in ‘nominal’ widths and thicknesses, the actual measurements are less due to milling and planning processes at the lumber mill. For example, a 2x4 actually measures 1-1/2” x 3-1/2”.  PS 20-15, known commonly as the American Softwood Lumber Standard, establishes standard sizes and governs general requirements for lumber. The U.S. Department of Commerce has authority over this process through the NIST Voluntary Product Standard Program. 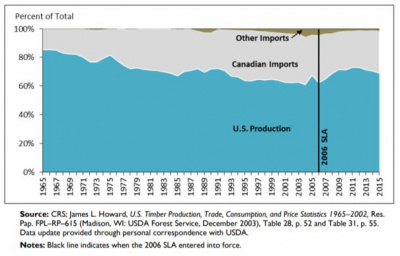 The overwhelming majority of softwood lumber CMs purchase is produced in North America either domestically in the United States or imported from Canada, with a very small percentage imported from overseas. U.S. lumber is produced in two distinct regions of the country.  Southern lumber mills largely produce Southern Pine (SP), while western U.S lumber mills  produce Douglas-Fir (DF), Hem-Fir (HF) and Spruce-Pine-Fir South (SPFs).  Canada produces primarily Spruce-Pine-Fir (SPF), where Western Canada also produces many of the same species groupings as western-U.S. mills. Canadian lumber has been the focus of a long standing trade dispute between the U.S. and Canada. U.S. producers have claimed Canadian mills receive production subsidies from their government, lowering their overall costs and allowing them to then sell their lumber at a lower price points in the U.S. than domestic mills can (this is sometimes referred to as “dumping”).

CMs purchase lumber for use in components in a variety of ways from a variety of sources. CMs purchase lumber directly from lumber mills in truckload or rail car quantities based on shipping rates, proximity of the CM operation to the mill, whether the CM has access to a rail spur, and payment terms placed on the purchase. CMs purchase lumber through lumber brokers who operate as middlemen between lumber mills and buyers. Brokers have an ongoing understanding of lumber markets and can offer insights to the buyer on timing purchases to achieve their inventory goals at an optimal cost. needs.

In addition, CMs often have the option to purchase lumber from wholesale lumber dealers who will sell less than truckload quantities for specific grades and species that a CM may not use in high quantities but still need for certain engineering solutions. Each of these entities sells lumber as a commodity, while closely following regularly published lumber prices found in Random Lengths, Layman’s Lumber Guide, Fastmarkets RISI, Madison’s Lumber Reporter, Forest2Market, etc. Pricing is also affected by individual relationships, lumber futures markets and anticipated supply and demand metrics.

Beyond the purchase of species for the species groupings listed above, dimension lumber is broken down into a variety of grades based on visual appearance characteristics such as bow, crook, wane, shake, check, knots, split, and twist.  Various visual grades commonly used in component manufacturing include (from strongest to weakest):

Design values are associated with each of the different grades, where according to PS 20-15 design value is defined as “strength and stiffness property values of structural lumber products published for design use…” Design values are extremely important. For example, CMs rely upon these values, as inputs into proprietary truss design software that output a load carrying structural member. 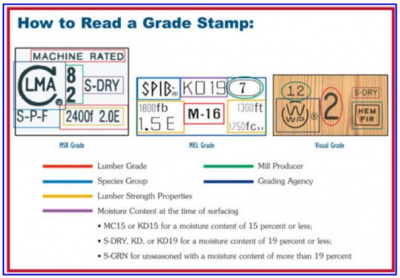 CMs trust that individual pieces of lumber, of the same size with the same grade marking, contain the same structural properties, whether they are from the same unit of lumber, same mill, or even different mills harvesting timber from completely different regions. As a result, lumber is a commodity and there are relatively low switching costs exist between lumber suppliers. This reinforces the transactional relationship that exists between CMs and lumber suppliers.

In addition to visually graded lumber, CMs also use machine stress rated (MSR) lumber. MSR is evaluated by equipment that measures modulus of elasticity and assigns mechanical properties to lumber. The MSR process reduces that variability of lumber design values.

Each piece of lumber produced for structural use contains a grade stamp listing the species group, lumber grade, the mill that produced the lumber and the grading agency that supervises lumber mills’ grading practices with the potential for additional information varying from mill to mill.

Lumber is an integral raw material to every CM’s operation when manufacturing wood trusses and wall panels. It is a necessary input but very much a commodity in which species and grades can be substituted for one another based on supply limitations or spikes in pricing. Given the open markets on which it is traded, most CMs base their purchasing decisions on lowest delivered costs and not strictly on specific relationships or brand/mill loyalty. As a result, little interaction exist between CMs and lumber mills outside of a transactional nature unlike other key suppliers to the CM industry.

Posted on October 3, 2019 in Housing & Construction