Why Is Lumber Supply Shifting from Canada to U.S. South?

Editor’s Note: The following article article provides insight into important shifts in the North American lumber supply chain. Given there are no direct substitutes for lumber that a component manufacturer can use in their manufacturing operation and maintain the same lever of truss production, CMs find themselves beholden to lumber suppliers. Therefore, it is important to stay abreast of significant changes in supply.

Raymond James analysts assert that about two billion bf of annual lumber production has been curtailed by mills in British Columbia, due to the beetles, tariffs and mill closures. This has shifted more logging to the U.S. Southeast. Analysts contend that the U.S. South is a strong competitor with a historic glut of ready-to-fell trees which has depressed prices and prompted a surge in new sawmill construction.

Among these new mills are Canadian companies Canfor Corp., Interfor Corp. and West Fraser Timber Company. Brooks Mendell, chief executive of Forisk Consulting, which advises timber investors, says that over the past decade, Canadian softwood lumber production capacity has shrunk to roughly 28 billion bf a year from about 38 billion bf. "A quarter of Canada's ability to produce softwood lumber has come off the market." He feels that Seattle based -Weyerhaeuser Co., should benefit from this with 7 million acres of Southeastern timberlands, several mills and export terminals in Louisiana and the Carolinas. 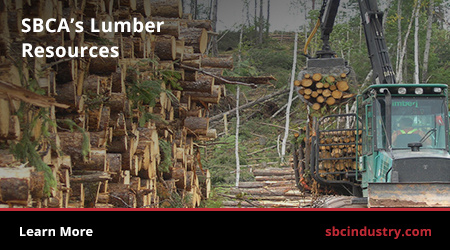 Weyerhaeuser Chief Executive Devin Stockfish says that as new mills open in the South, prices for timber around them are rising. He identifies that mills with the capacity to produce 5.5 billion bf a year are being built in the South, as well as facilities that turn trees into pulp for paper and cardboard.

In Texas, the forests cover over 75% of Hardin, Tyler, Polk, Jasper, Newton and Marion counties and take up more than half the land in two dozen more. The region's native pine trees have been harnessed into what's known as the "wood basket" of the nation by foresters such as Rob Hughes, president of the Texas Forestry Association. More than 7 billion trees are being grown for harvest in East Texas, mostly on private land. Mostly used until now to frame single-family homes and for everyday products, Gulf Coast SYP could soon be destined for high rise structures. Engineering advances have greatly increased the strength, rigidity and stability of wood as a building material. As a result, the International Building Code, which forms the basis of many cities’ building regulations, decided in January to more than double the allowed height of a wooden building to 18 stories.

Over the short term expect weaker prices to continue up until the U.S. Thanksgiving holiday as buyers traditionally hold off buying at this time of year to coordinate delivery time around holiday downtime in November and December.

This year's extended curtailments and an ever-tightening supply chain, combined with heavy-losses in Western Canadian production should lead to much higher prices than typically seen by month-end and into December and early 2020. Widmans identifies that mills with the capacity to produce 5.5 billion bf a year are being built in the South, as well as facilities that turn trees into pulp for paper and cardboard.

According to wood resources quarterly, sawmill profit margins have declined sharply over the last 12 months in North America with BC sawmills margins in Q2/19 being close to their lowest levels in 15 years. They continue saying that while margins have fallen quite substantially in the US South the past year, reaching a three-year low, they are still higher than the 15-year average as tracked by the WRQ. Small changes in log costs together with lower income from lumber and residual sales have taken the gross margins for sawmills in British Columbia down to their lowest levels since the Global Financial Crisis back in 2009. WRQ asserts that In Q2/19, these margins are less than half of their ten-year average.

Posted on November 14, 2019 in Most Popular Articles, Business