Use a Nail Gun? You Need to Read This

Nail gun injuries are no joke. They are responsible for almost 37,000 emergency room trips annually; some of the most severe injuries can result in bone fractures and severed tendons, resulting in tens of thousands in medical costs. For those suffering traumatic injuries, the impact on their lives can be even more devastating than the cost, including restricted mobility and permanent disability. Despite half of all nail gun injuries impacting the hands and fingers, hand protection is not among the personal protective equipment (PPE) required by OSHA when operating a nail gun. This is most likely due to the fact that there hasn’t been effective hand protection available that can help mitigate the devastating effects of a hand gun injury.

That is, until now. 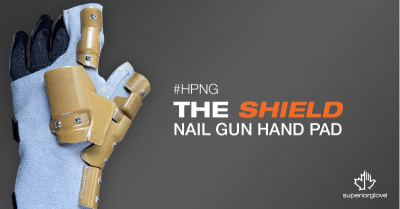 Built specifically as a barrier to mitigate the damage done to hands due to human or mechanical malfunction of nail guns, The Shield is the industry's first hand protection offering for nail gun operators.

Having spent over five years in development including several field study trials, rest assured that the placement of The Shield's ballistic plating is not haphazard. Made from Kevlar® (that's right, the stuff that stops bullets), the ballistic armor plating on The Shield has been strategically placed in a geometric sequence designed to protect the areas most vulnerable to nail gun injuries.

The Making of The Shield

It all started from a simple idea at a safety meeting…  In 2014, Safety Coordinator Jim Gruener was mediating his company's monthly safety meeting when a problem brought up by the Panel and Truss team caught his attention. The problem was that this team was seeing an increase in nail gun injuries while at the same time coming up empty on any viable solution to protect workers from these devastating injuries.

What they imagined was something similar to a knight's armor, but none of the glove manufacturers they reached out to had anything even close. When they reached out to Superior Glove, inspiration was born - since the glove they wanted didn’t exist, why not create it? So began a five-year partnership that culminated in the creation of The Shield.

Working hand-in-hand (pardon the pun), Superior Glove would develop prototypes that would be sent to the truss teams to try out. By carefully analyzing what worked and what didn’t, The Shield began to take form.

For the past five years, The Shield has been through rigorous development and in-field testing to ensure its form and materials are optimized for providing nail gun operators with additional protection against nail gun injuries. When you wear The Shield, know that you’re wearing protection carefully designed by safety engineers and ruthlessly tested by nail gun operators.  A truly Superior innovation, we are very excited to finally be able to introduce this incredible hand protection to the safety market.

Posted on November 4, 2019 in Sponsored Headlines