Simpson Celebrates Its Involvement in BCMC

The 38th annual Building Component Manufacturers Conference (BCMC) took place in late October at the Greater Columbus Convention Center in downtown Columbus, Ohio. More than 1,700 people attended this year’s convention, which showcased 124 exhibitors with the theme of “Set Your Course.” 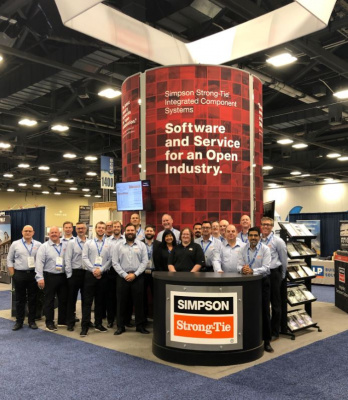 BCMC activities began on Tuesday morning with a bike ride allowing participants to stretch their legs in preparation for an exciting week. This was followed by a tour of the nearby Amazon facility, where attendees got some insights into Amazon’s success, often attributed to their operational efficiencies. The exhibitor show opened on Wednesday morning after a kickoff presentation including updates from the Structural Building Components Association (SBCA) and an awards ceremony. This was followed by various educational breakout sessions throughout the day.

This year, Simpson Strong-Tie had our booth located next to the bocce ball courts (we also sponsored bocce!) and we had a steady stream of conference attendees stop by throughout the course of the conference. In the Simpson Strong-Tie booth, we had a new video loop highlighting our focus on the customer journey, reinforced by powerful testimonials from our customers and industry partners. In addition to our Component Solutions® software, we also featured hardware, fasteners and tools for component manufacturers and installers, including our new Quik Stik™ rafter and truss fastening tool. Our hospitality suite and meeting rooms also hosted a steady flow of customers and prospects enjoying refreshments and resting their feet while they joined us for a preview of the latest features in CS Director™ and CS Truss Studio™.

Thursday started with a 5k run/walk and more education breakout sessions as well as opportunities to visit the exhibitors on the floor. Friday closed with an SBCA board meeting and the opportunity to network with others in the component manufacturing community.

Can’t wait to see you next year!