With hundreds of industry professionals in attendance at the BCMC kick-off event, SBCA recognized four industry leaders for their tireless support of the association and industry. 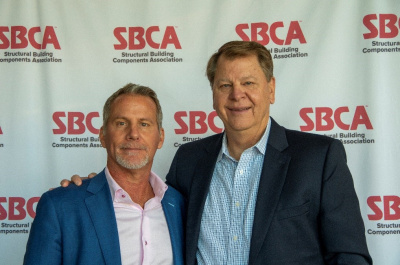 “He has always been willing to help grow the industry,” said Barry Dixon, CEO of True House, Inc. “He did it for what was best for all, and not what was best for him, and his passion, loyalty and desire to make things better carries on in his local community and personal life.”

Finkenhoefer, the 40th inductee into the Hall of Fame, was selected by the vote of industry peers and is recognized as contributing significantly to the advancement of SBCA and the component industry.

“There are a lot of people who have been inducted into the hall of fame who are people I looked up to and admired, and still look up to and admire today, and I don’t put myself in their class,” Finkenhoefer said. “I am very humbled by this award.” 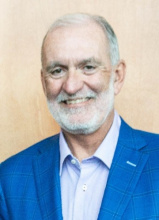 “He exemplifies the true meaning of leader in every way. Over the past 35 years he has shared an abundance of industry knowledge and experience that has helped us all avoid the pitfalls of our industry,” said Steve Stroder, President & CEO of California TrusFrame. “He always makes time for association business and industry needs, sharing his ideas and experience with others as he works to raise the bar for us all.”

Hikel has served on the SBCA board for 17 years, and has played a leading role on various committees from marketing and membership, to quality control and the association’s executive committee. Hikel was the association president in 2011, a 2014 inductee into the SBCA Hall of Fame, and was the first recipient of the Dwight Hikel Award in 2017, named in his late father’s honor.

“I feel very honored to be recognized by my peers,” Hikel said. “It’s an incredible honor, one that I was very surprised to receive.” 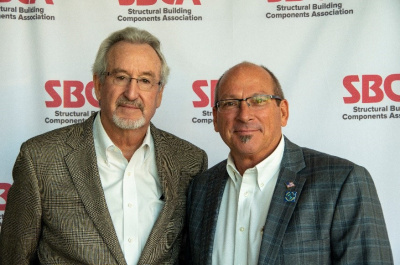 John Herring, CEO of A-1 Roof Trusses in Fort Pierce, Florida was recognized as the Dwight Hikel Humanitarian Award winner.

The award was first established in 2017 to honor individuals for their mentoring spirit and generosity in philanthropic activities in the structural building components industry and/or sharing ideas, time and talents for the purpose of mentoring others in the industry.

“Through his journey, some things never changed and never wavered; from his spirit and values, to his obsession to help others and watch them grow,” said Mike Ruede, Executive Vice President and CEO of A-1 Roof Trusses and 2020 SBCA President. “Through his career he has helped mentor tens of thousands of employees and people both inside and outside his organization.”

Herring began his career in the structural building components industry in 1977 when he purchased A-1 Roof Trusses and has held numerous positions within SBCA over the years.

“I’m humbled and honored, Dwight was a good friend,” Herring said after accepting the award. “I don’t think I really deserve the award without giving accolades to many other people. I owe a lot to this industry, I owe a lot more to it than it owes me.” 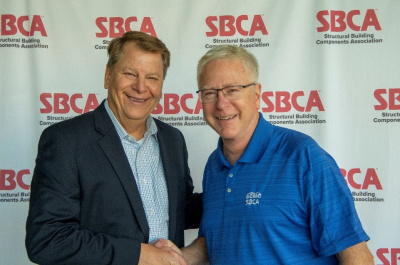 Halteman has served the industry for 30 years, first building ladder panels in 1972 and later joined his father in the late 1980’s as an independent equipment representative. Today, he works alongside his son, Joe, and daughter, Julie and travels the world to advance the structural building components industry.

“The enthusiasm I have has come to me through others, from my father to the many people I have admired over the years,” Halteman said. “They believed in the association, and I do too. I think it’s a remarkable organization and it has been, and is a pleasure, to work in this industry.”

Industry leaders say that Jay is always willing to provide support when companies have lost assets due to catastrophes and he is always an ambassador of the industry with media, startup companies and students.

“He is somebody that could have an award named for him someday for all he has done for this industry and the kind of person that he is,” said Jim.

Posted on November 15, 2019 in Industry Announcements