With the ongoing shortage of skilled labor showing little signs of abatement, contractors are eagerly seeking ways to increase efficiency. This is one reason why the use of panelized wood-framed wall systems and other methods of prefabrication are gaining popularity. 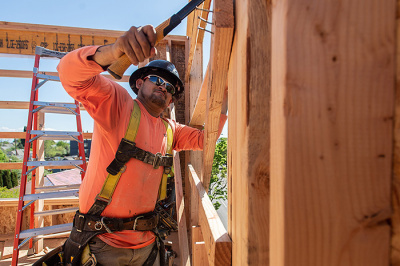 “There is a lot of automation and digitization of building information with BIM, so that’s a factor,” said Mike Steffen, director of innovation for Walsh Construction. “But the big factor that’s leading to its use now is the shortage of labor.”

It’s actually a double whammy – in the Pacific Northwest, at least, he added.

“There’s more work out there available for the contractors to do, and the labor pool is extremely stretched,” he said. “So they have to do more with less, and panelization allows them to attack projects, regardless of their size, with a smaller crew and be able to spread their labor out. To me, that is actually the biggest driver of the change right now.”

One of the advantages of prefabrication is the reduction in the amount of on-site work required. By using three-dimensional digital models based on engineering and design documents, virtually any part of a project can then be shared with trade partners; then those aspects where prefabrication makes financial and practical sense can be tackled.

“Really, it’s part of the Lean construction trend that’s been smoldering a little bit over the past almost decade at this point,” said Aaron Vogel, a project and building information modeling (BIM) manager for Bremik Construction. “Some components of that seem to be catching on more than others, but basically it’s making it more of an efficient manufacturing process instead of the less efficient method of building everything on-site.”

Vogel has helped guide a number of projects where Bremik has collaborated with trade partners in creating these models months before the first shovelful of dirt is moved.

“If we’re coordinating with trade partners on all the systems in the building months before anything shows up on-site, it allows them to prefabricate,” Vogel said. “We get everyone on board early on and partner with the subs and try to communicate early on that we view this as a benefit we think you should do.”

Some of the larger subcontractors Bremik has partnered with in this regard include Piper Mechanical and Timberland Inc. The latter firm is working with Bremik on the Magnolia II affordable housing project in Northeast Portland. There, the two companies worked up a digital framing package based on building plans using Autodesk Revit design software. This allowed Timberland to pre-cut every stick of lumber being used for the four-story building for nonprofit Innovative Housing Inc.

“We’re kind of taking things that normally aren’t part of construction industry and making it more like manufacturing process,” Vogel said. “We’re borrowing from the architectural and design and from animation, and now there’s a whole push toward improving the visibility of the project, so there’s a whole tidal wave of software geared toward the contractor.”

It’s not a rigid process. There are so many variables in each project that creativity is not only allowed; it’s required.

“In general it’s been an asset,” Vogel said. “It’s been something that to a certain extent has grown out of the architects’ modeling. But it would be nice if we can use it to move toward a more collaborative process.”

Prefabricated wall panels are one of the easier pieces of a building to build off-site. They come in many forms too. From simple interior walls consisting only of bare studs to exterior panels that come with weather barriers, insulation and even utility fixtures, the variations are nearly endless.

Computer-aided design and manufacturing have also helped ensure a much higher level of accuracy in crafting prefabricated components.

Such advantages of prefabrication may influence decisions for affordable housing projects. The owner requirements for projects of this type typically differ significantly from those for market-rate projects, in part because of the former’s long-term approach. 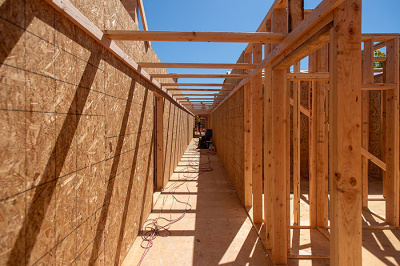 The Magnolia II project in Northeast Portland is being framed with pre-cut and pre-fabricated lumber as part of an effort to increase efficiency in the construction process. (Josh Kulla/DJC)

“With the client niche we serve, especially in the affordable housing world, costs have been going up dramatically,” Steffen said.

From a historic annual rate of inflation of roughly 3 to 4 percent, the current rate of cost escalation regionally is at least double that amount.

In response, Steffen led a team of Walsh executives in crafting a white paper that examined a host of different ways of approaching design, preconstruction and construction in an attempt to reduce costs and boost efficiencies. Known as Cost Efficient Design and Construction (CEDC), this effort is simply a matter of common sense, Steffen said. CEDC includes things like standardizing the layout of residential units, reducing their width (and by extension, the building envelope), avoiding excessive glazing, staying away from cantilevers and structural steel, and putting plumbing in back-to-back walls.

Altogether, such actions can slash roughly 10 to 20 percent from a project’s cost, Steffen said.

“Our premise is if you follow these ideas you will very likely reduce costs,” he said.

Such strategies can be used with prefabricated wall panels. There are many examples under construction in Portland, including the Nesika Illahee affordable housing project being built by LMC Construction in the Cully neighborhood.

The three-story wood-framed building designed by Carleton Hart Architecture will have 59 residential units. Prefabricated panels manufactured by Pacific Wall Systems are being used. This has reduced the number of carpenters on-site to fewer than 10.

“If I had 20 guys out here they’d just be getting in each other’s way,” LMC superintendent Tim Williams said. “I think we have more superintendents (on-site) than we do laborers and carpenters.”

Meanwhile, efficiency also is increasing via use of cross-laminated timber panels in floor and ceiling installations for projects such as Albina Yard, an office building in Northeast Portland. Geoff Sosebee of Lever Architecture helped design it.

“The panels only require a crew of four, including a crane operator, and it goes up very, very quickly,” he told the audience last month during a Portland Design Week event focused on prefabrication. “But we learned that we needed team-wide communication with the contractor, the manufacturer, architects, engineers, fabricators – everyone involved.”

Lessons were learned along the way, Sosebee added. But the process that was developed in ad hoc fashion for Albina Yard has since been used in other projects.

“We modeled every bolt and every screw, and in the end we wanted this thing to go together like an Erector Set,” he said. “An entire floor would be set in three to four hours during construction, but it wasn’t all easy.”

Challenges abound for the building industries these days. However, prefabrication and similar strategies are attracting attention, and may help firms overcome those hurdles.

“The industry has been lazy and has not been willing to do the right thing, which is to do the intensive coordination early and have this stuff figured out on paper or with a virtual model,” Steffen said. “But the industry is going more and more that way, and the prefabrication can help.”