A Look Back at Insulation Products of the 20th Century

Originally published by: Architect Magazine — May 2, 2019

Insulation is critical to the energy efficiency of a building envelope. The U.S. Green Building Council’s LEED v4 building certification program, for example, awards up to two points to energy conservation from insulation that minimizes heat transfer and thermal bridging. However, insulation as we know it today is a relatively recent technology. While civilizations as early as the Ancient Greeks reportedly utilized asbestos, it was not until the 20th century that major advancements were made in insulative materials. 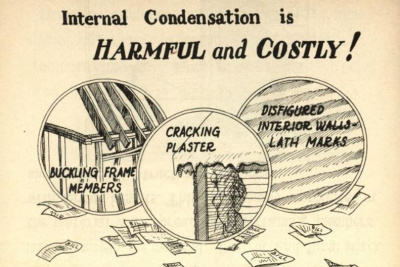 In the 1900s, the design and construction of buildings with a thermal envelope to improve human comfort, as well as to reduce energy costs, spurred the production of insulating materials. The use of cavity wall construction for housing across the country led to the development of materials from mineral sources that could be installed as loose fill, blankets, or sheathing panels. The use of natural fibers extracted from wood and sugar cane produced a number of different insulating sheathing boards. By midcentury, new industrial processes resulted in lightweight glass fibers and mineral aggregates that combined thermal resistance with fire- and rot-resistance. Later still, the combination of insulating materials with vapor resistant materials led to composite systems.

Here, ARCHITECT takes a look back at the available insulation technology of the 20th century.

Patent Mineral Wool, A.D. Elbers, New York, 1880
Some of the earliest commercial insulation were made of mineral wool, a fibrous material spun from molten mineral or rock components such as slag. Mineral wool could be used to insulate piping and heating systems, as well as in general structures.

H.W. Johns' Asbestos Steam Saving and Fire Proof Materials, H.W. Johns Co., New York, 1884
The H.W. Johns Co., established in 1858, became a large manufacturer of asbestos insulation, a material noted for its fire-resistance—and later reviled as a health hazard. This catalog promotes the use of insulation materials for boilers and heating systems.

Celotex Insulating Lumber, Celotex Co., Chicago, 1923
The Celotex Co. produced a variety of building products that it promoted for their insulating qualities and structural strength. The company claimed that its insulating lumber exterior sheathing material was superior to conventional lumber or masonry in reducing thermal transfer, and therefore reduced energy usage.

The Building Contractor’s Book on Armstrong’s Corkboard for a Heatproof Lining for Walls and Roof, Armstrong Cork & Insulation Co., Pittsburgh, 1926
Cork has long been recognized for its thermal insulating capacity and noise transfer reduction. The Armstrong Co. produced corkboards that could be used instead of lath for plaster walls.

Weatherwood Insulation Data Book for Architects, Chicago Mill and Lumber Corp., Chicago, 1931
Weatherwood was one of several competing versions of a structural insulating board made from wood or other natural materials. This publication bills itself as a comprehensive guide for architects offering climate and technical data on insulating materials.

Facts About Insulation, Silvercote Products Inc., Kalamazoo, Mich., 1936
This guide to insulation is an illustrated version of two technical publications from the American Society of Refrigeration Engineers. Early research on insulation revealed that insulation technology also needed to address moisture transfer and control.

The Book of Triple Insulated Homes, Johns-Manville Co., New York, 1937
The "triple insulated home" featured a variety of Johns-Manville products that had improved durability and fire resistance because they were made of asbestos. The wall cavities of this hypothetical house were filled with rock wool insulation while the roof and walls featured asbestos-cement shingles.

Zonolite Brand Vermiculite: Insulation, Lightweight Aggregates, Acoustical Materials, Zonolite Co., Chicago, 1951
Vermiculite is a fire-resistant mica mineral that could be turned into a very lightweight loose-fill insulation for cavity walls or attics. Vermiculite could also be used as an aggregate in plaster or concrete. Unfortunately, these materials could also contain asbestos.