California TrusFrame Invests in its Future

Originally published by the following source: SBC Magazine — May 13, 2019
by Mindy Caldwell

The SBCA Emerging Leaders Committee was created to give the next generation of leaders in the structural building components industry and in SBCA an opportunity to meet one another, build lasting relationships, learn from others who will share their experiences and gain a greater depth of knowledge of the industry and its trade association. In 2017 the founding members of the committee began working in earnest to attract younger members of SBCA to get more involved and develop opportunities for leadership at Open Quarterly Meetings (OQM) and BCMC. 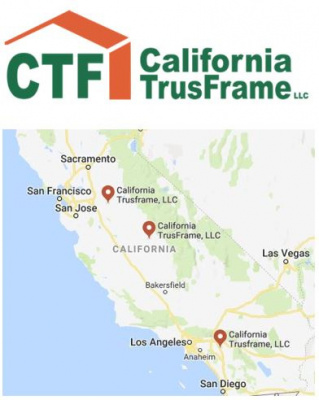 California TrusFrame (CTF) in Perris, California, has been especially supportive of these efforts. With 750 employees across its four locations in southern California, CTF currently has four members participating on the growing committee.

Jason Ward, vice president of HR and safety for CTF was fairly new to the components industry when he joined the group and has found a great deal of value in being involved. “My job requires me to be very strategic,” explains Ward, who also serves as chair of SBCA’s safety committee. “Participating in SBCA has been the best way to quickly gain a strong grasp of this industry and hear thoughts, ideas and opinions of CMs across the country. It’s been phenomenal.”

This sentiment is shared with Ward’s colleagues in other areas of the company. Also new to the industry in the past few years, Bryan Sylvester started with CTF as a technology consultant to address some short-term IT goals. Now as vice president of IT he values discussion with other IT professionals in the industry through his participation in both SBCA’s IT and emerging leaders committees. “Every time I go to a meeting, I’m able to come away with something valuable,” he says. “It works both ways, sometimes you share what you’re doing, sometimes you learn from others.”

“OQMs are a great place to have direct conversations with peers across the country,” agrees Jason Walsh. Over his 20-year career in the industry, Walsh has worked in design and estimating, but his affinity for interacting with people and providing exceptional customer service ultimately led him to sales. As CTF’s vice president of sales, Walsh recognizes the value of “the personal connections you make with the great people in this industry,” which is also where he finds value in participating in SBCA. “You can talk about issues you’re dealing with in your market and share best practices with others so they can prepare for the day when it might come to their market,” he says.

Ashley Stroder is CTF’s newest participant on the committee. Also in sales, Ashley started her career as an elementary school teacher. While she loved working with students, other factors compelled her to make a career change. “Many people who I respect and who have fulfilling careers work in the structural building components industry,” she explains. After interning with CTF last summer she says she knew she could make a career out of selling trusses, “a career that would be fulfilling both by challenging me and allowing me to grow and succeed.” She’s been moving in that direction ever since.

For Ashley getting involved with SBCA was a no brainer. “I believe that the best way to learn something new is to immerse yourself and to surround yourself with leaders and veterans in that field,” she says.  “In speaking with other SBCA members who are also coworkers, I have learned that SBCA is an invaluable tool for building relationships. SBCA seems like the best way to become active in learning all there is to know about the structural building components industry.”

As a group, the Emerging Leaders Committee has worked hard to create opportunities for member engagement at SBCA events, most notably with the creation of Casino Night at BCMC and a scholarship fund. Efforts to draw other emerging leaders in the industry is paying dividends as OQM attendance increases and more people get involved with SBCA.

The committee’s most recent effort is a Leadership Development Seminar to be held on June 4 in conjunction with the upcoming OQM in Fort Worth, Texas. This is a great opportunity to experience everything that SBCA has to offer as it invests in the future of the industry!

If you or someone in your company is a potential candidate to join SBCA’s Emerging Leaders Committee, visit the website to learn more and submit an application, or contact staff with questions.