Originally published by: ProSales Magazine — May 21, 2019

It’s not uncommon for builders who want to do the right thing with excess materials—of which there are about 8,000 pounds for every 2,000-square-foot home—produced at a home site to face many barriers. In fact, even as U.S. home builders have put the energy savings of their highly efficient homes front and center in the American psyche in the last 15 years, the waste that’s created building them gets far less attention. 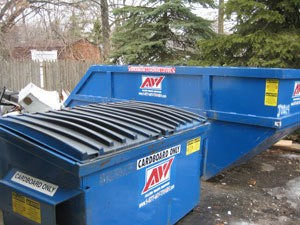 Thompson Remodeling hired a firm to leave a 12-yard Dumpster at its office for cardboard. This is where the remodeler puts its cardboard building-material packaging that the crews bring from the jobsite. The Dumpster is emptied every six weeks. The company pays a pull-fee for this service; it does not pay by weight. The larger container is for regular landfill items. Behind the two containers is where the scrap metal is piled for eventual hauling to a center where the company receives payment by weight.

Even as curbside recycling has become the norm in U.S. cities for household trash, recycling for construction and demolition (C&D) waste, which accounts for more than twice the volume in America’s landfills, still just happens in fits and starts. On average, it costs builders more to recycle than to simply take their loads to the dump. What’s more, it’s maddeningly difficult to ascertain consistent metrics on what exactly is being thrown out, and what’s being recycled.

It takes a Herculean effort by many builders to recycle more of what’s generated at their worksites. According to the EPA’s 2017 C&D report, while there are more than 1,500 C&D-specific disposal facilities in the U.S., and thousands of other non-C&D oriented landfills that accept C&D waste, there were only 512 C&D material recovery facilities (which are set up to do automated waste sorting) as of 2012.

Even for builders who do have access to C&D material recovery facility locations in their markets, it may still not make sense to recycle their C&D waste. That’s because, on average, tipping fees are $77 per short ton, compared to just $43 at a C&D landfill, according to the EPA. For builders who make the choice to pay that higher price anyway, though, their C&D waste still may not get recycled.

Builders interested in making sure their waste actually gets recycled have options: Look for certification from the Recycling Certification Institute, which audits the books of haulers and C&D facilities, or use technology, such as software from waste and recycling platform Starlight. Starlight keeps a running tally for builders on exactly how much of their waste has been diverted on a project, in real time.

Builders can also take on the task themselves, by using pre-cut lumber and framing packages to avoid waste and by having subs completely empty caulking tubes so cardboard hulls can be recycled. Employing such practices can cut down on trash by as much as 6,400 pounds of garbage per house. Reducing overall waste can have the ripple effect of saving builders money on their trash-hauling bills.