After three years of starts and stalls, the 1.5 million-square-foot First National Bank Tower—which occupies the largest vacant block in the core of downtown Dallas—is getting a savior. Todd Interests is taking control, bringing with it new funding and a long track record of success. 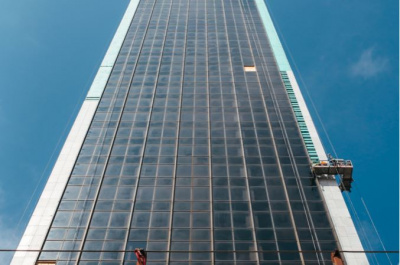 Work on the 52-story tower at 1401 Elm Street quietly began ramping back up in recent days, while the deal with Todd Interests was still being ironed out. That’s because the project must hit a completion target of year-end 2020 to qualify for millions in entitlements.

Former redevelopment lead Drever Capital Management, which acquired the property in 2016, will continue in an advisory role, said Shawn Todd, CEO and founder of Todd Interests. “Maxwell Drever and his team gave it all they had and should be applauded for their efforts and for keeping the property out of foreclosure,” he said in a statement. “Our firm, this project, and our city will benefit greatly from Maxwell’s advisory role moving forward.” 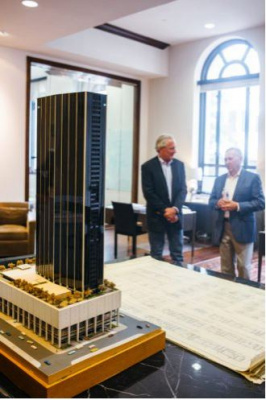 The black-and-white skyscraper, bounded by Pacific Avenue and Akard, N. Field, and Elm streets, was the original Dallas home of First National Bank. Designed by noted architects George Dahl and Thomas E. Stanley, it was the tallest tower west of the Mississippi River when it opened in 1965, said Philip Todd, project lead and partner at Todd Interests: “First National Bank Tower will soon stand tall again, as it will undergo one of the largest historic renovation’s in the history of the United States.”

Todd Interests has had a string of impressive downtown redevelopments—the historic post office at 400 N. Ervay St.; the 30-story One Dallas Center on the DART rail line at St. Paul Street; and its latest venture, an 18-building mixed-use project called East Quarter.

Philip Todd called First National Bank “the most complicated and challenging adaptive reuse” Todd Interests has ever taken on—not only in the complexity of the redevelopment itself, but in additional entanglements that involve legal documentation to qualify for Historic Tax Credits. What has saved the project as it has languished in recent years, he said, is the “unwavering commitment of Andres Construction and its loyal subcontractors” and Dallas’ ongoing willingness to provide TIF support.

Todd Interests has assembled an A-team of partners on First National Bank Tower: Berkshire Hathaway’s American Housing Partners will acquire the federal tax credits, statewide lender Stonehenge Financial will assume the statewide credits, and longtime equity partner Moriah Real Estate, which participated in the redevelopment of One Dallas Center, is at the top of the equity stack at $100 million. 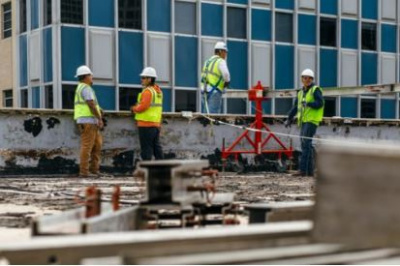 Construction resumes on the project at 1401 Elm St. in Dallas. About 500 workers are expected to be on site daily. (Photo by Justin Schwartz)

Merriman Anderson Architects has been involved in the project from the start; it was first engaged to work on a feasibility study when the tower went up for sale. “Since that time, we have been fortunate to continue with the project through owner and programmatic changes, said Aimee Sanborn, principal and team leader at Merriman. “We passionately believe that the current design and program is the highest and best use for the project and will greatly benefit downtown Dallas.”

The massive redevelopment will focus on four uses: apartments, hotel, restaurants, and retail. A 200-room hotel, which will serve as a Texas flagship for Thompson Hotels, is scheduled to open on Sept. 1, 2020. The residential component will feature 318 luxury apartments, including some on the 48th floor—the highest in downtown Dallas.

Kourtny Garrett, president and CEO of Downtown Dallas Inc., said the project “will transform downtown’s last major vacant building in the heart of a very active part of the center city, infusing life into a full city block that has been dark for a decade.

“Its magnitude is unparalleled,” she said. “At 1.5 million square feet, four projects in-one, the largest tax credit deal in the state’s history, local Tax Increment Financing, and significant private investment, it is one of the most complex redevelopments in the city to date.”