Gov. Jay Inslee was joined today by Democratic legislators and climate action supporters to unveil a plan that would launch a dramatic reduction of Washington state’s greenhouse gas emissions over the next 15 years. 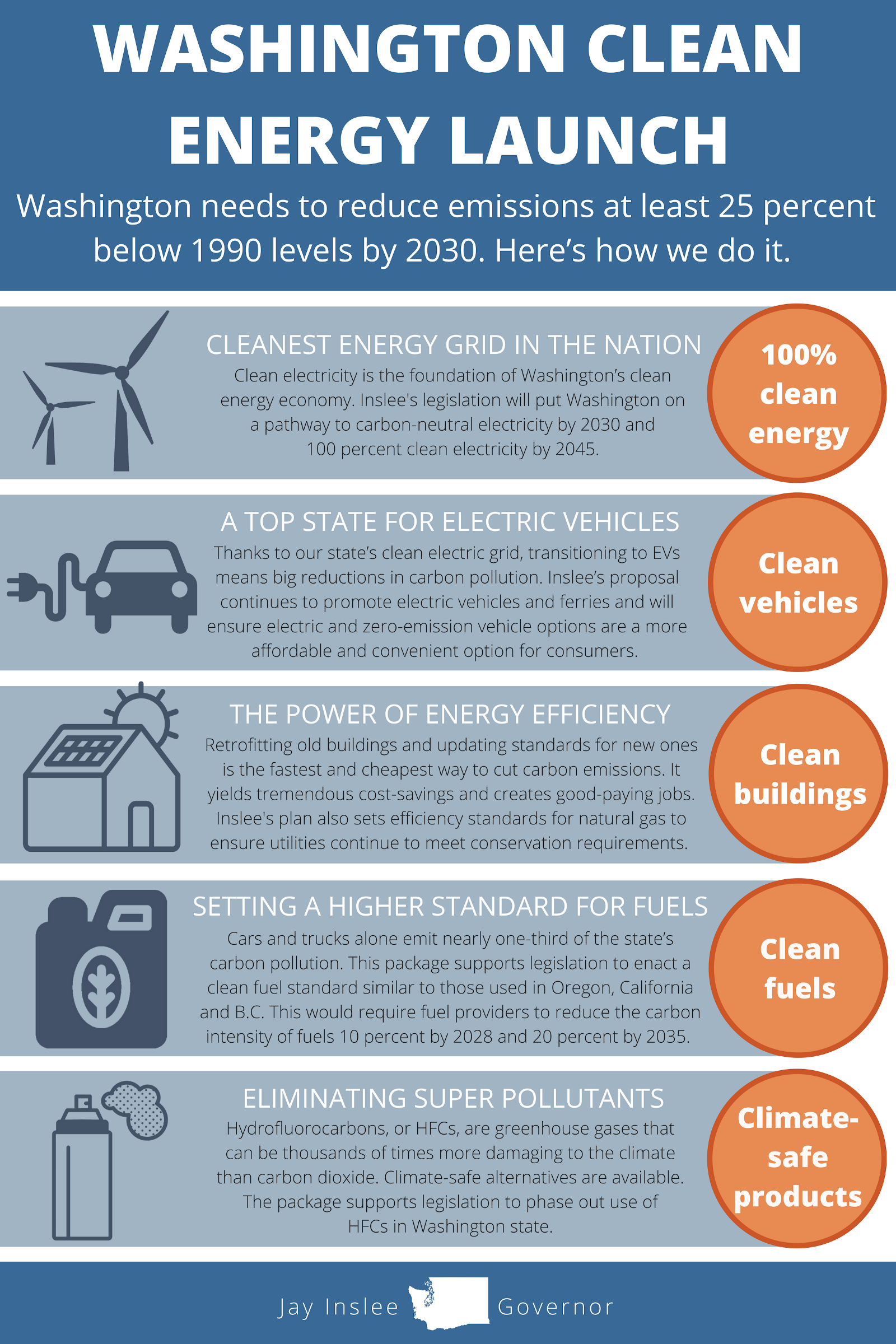 The proposal would accelerate the innovation and efforts already underway across the economy to transition to 100% clean energy, construct ultra-efficient buildings, establish a clean fuel standard, electrify the state’s transportation system and phase down super-pollutants in certain products. Combined, the policies would reduce greenhouse gas emissions in Washington state to 25 percent below 1990 levels by 2035.

“We know what it will take to combat climate change and we should be confident in our ability to invent, create and build the technologies that will lead us to a healthier and more secure carbon-free future,” Inslee said. “Washingtonians are ready to see their elected leaders step up to prevent further harm to our forests, our air and our communities. These are enormous steps forward in our effort to save our state and our planet.”

Bold action at all levels of government around the world is necessary to avoid the 2.7-degree global temperature increase scientists predict will happen within the next 20 years. The most recent climate assessment by the UN Intergovernmental Panel on Climate Change warns the climate is warming faster and with more dire consequences than previously predicted.

A recent federal climate report laid out impacts to the nation’s national security, economy, public health and infrastructure as well as impacts specific to the Pacific Northwest such as damage to crops and possible extinction of certain aquatic species.

Continued innovation in ultra-efficient and low-carbon technologies is crucial to driving down emissions fast enough to avoid or delay worst-case scenarios. Inslee says governments can adopt smart policies to unleash that innovation so it can happen at a bigger scale. That technological development also comes with enormous economic opportunity.

“We see the answers to climate change all around us every day. Electric vehicles, solar panels on rooftops, energy efficient appliances, biofuels… new technologies are emerging every day,” Inslee said. “Driving down emissions and reducing carbon means harnessing that innovation and super-charging our efforts to do it more, do it bigger and do it faster. We can do this. We must do this. And we’ll all benefit from the economic growth and increased security that comes with it.”

Democratic legislators agree that climate action will be a priority in the upcoming legislative session.

“Our highest public and moral responsibility is to lift up the state’s quality of life and care about our grandchildren’s grandchildren,” said Sen. Reuven Carlyle. “This agenda is central to a long-term, strategic approach to the next generation of our state’s energy and climate policy. I’m particularly excited by the depth and breadth of alignment between the House, the Senate and the governor to move forward on meaningful climate action. Our economy, our environment and our children deserve no less.”

The Legislature in 2008 adopted greenhouse gas emission limits of 25 percent below 1990 levels by 2035. This requires the state to further reduce emissions nearly 16 million metric tons per year.

“2019 can and must be a breakthrough year for clean energy and greenhouse gas pollution reduction in Washington. Powerful policies to accelerate our clean energy transition and grow clean energy jobs in our state are a top priority for House Democrats. We plan to move forward with laws reducing pollution across multiple sectors — electricity, transportation, and buildings — showing that clean energy and a strong economy are both compatible and mutually reinforcing.” — Rep. Joe Fitzgibbon, D-West Seattle

“Today I stand with the Governor, my colleagues in the Legislature, and the people of my district to fight for a clean-energy economy that works or all of us. We must transform the way we generate electricity by accelerating adoption of renewable energy sources. We’re in a race to move beyond fossil fuels and achieve a 100% clean grid. It’s time to sprint.‎” — Rep. Gael Tarleton, D-Ballard

The biggest emissions reductions — nearly 6 million metric tons — in Inslee’s proposal comes from the transition to 100% clean energy. The proposal would make Washington among the first states to end all coal-fired electricity consumption by 2025, transition toward carbon neutral electricity in 2030, and lay the groundwork to eliminate all fossil fuels in electricity generation by 2045. To help spur clean energy technology development and deployment, Inslee is also proposing a 40 percent increase in the state’s successful Clean Energy Fund.

Ultra-efficient buildings have the potential to meet 100 percent of the state’s electricity growth over the next 20 years, making it another important strategy for reducing emissions. Inslee is proposing a comprehensive clean building package that incentivizes and encourages retrofitting of buildings and adoption of updated building codes for new construction.

Click here for more information and to see the full plan.